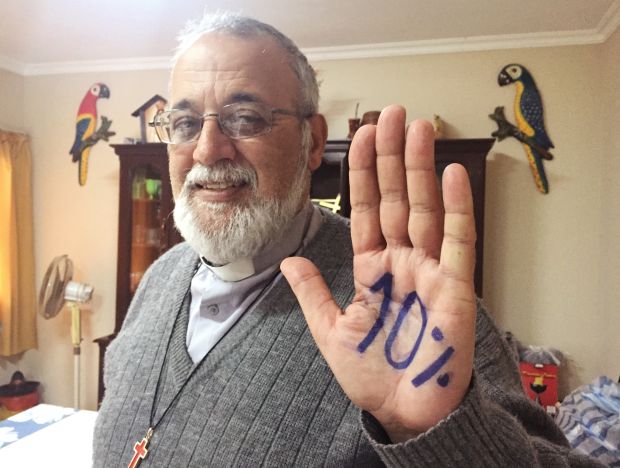 Camillian Father Mateo Bautista Garcia shows his hand with "10%" written on it. The priest wants Bolivia's government to spend 10 percent of its budget on health care. (CNS photo/David Agren)

SANTA CRUZ, Bolivia (CNS) — Camillian Father Mateo Bautista Garcia plans to push his palms outward when Pope Francis passes by so the pontiff can read his political protest written with a marker: “10 percent.”

The priest, who previously worked under Pope Francis in the Archdiocese of Buenos Aires, also plans to pass out paper hands on sticks for people to wave, showing the same slogan, “10 percent” — the portion of the Bolivian budget he says should be spent on health care.

His protests have been prominent in Bolivia and include monthly demonstrations, a petition with thousands of signatures and a June march in the administrative capital, La Paz. After the march, a government official said, “He wants to kill people,” since, the official said, health spending already accounts for 11.5 percent of the budget, not less than 5 percent, as Father Bautista insists.

The discomfort his campaign causes “makes them see the deficiencies that are there,” said Father Bautista, a member of the health ministry in the Archdiocese of Santa Cruz. “Anyone that gets too big” for the government “gets cut down to size.”

Padre Mateo, as the Spanish-born Father Bautista is better known, has become a cause celebre for critics of President Evo Morales, and there are many in Santa Cruz, a booming lowlands city often at odds with the government in the more indigenous altiplano.

But the priest butting heads with the government again shows the strife in the church-state relationship: Church leaders are cast as the chief critics and opposition to Morales, the country’s first indigenous president. Catholic officials and observers expressed hope the pope’s July 8-10 visit to Bolivia offers the opportunity to turn the page on nearly 10 years of mutual suspicions, public criticisms and the church losing its previously privileged position in a newly approved constitution.

“One of the things that I hope we see in this papal visit is that the pope, who is very politically able … can fix things so that in Bolivia we can still be critical, but that we have more bridges with the government,” said Jesuit Father Xavier Albo, who moved to Bolivia as a 17-year-old novice in 1952 and knows the president personally. “I think that he can achieve it because, here, we’re not aggressively militant.”

Pope Francis’ visit could prove more political than pastoral, though church officials and observers say relations started thawing somewhat with the election of Pope Francis in March 2013. Morales traveled to World Youth Day in neighboring Brazil that year to meet the pope and later made trips to the Vatican.

“With this pope, Evo feels very comfortable,” Father Albo said, adding Pope Francis gave the president a book on Liberation Theology and explained the idea of “structural sins.” At the previous meeting in Brazil, Morales told the pope, “I pray for you,” according to Father Albo.

Relations were not always so promising, especially after Morales and his Movement Toward Socialism party took office in 2006. Morales won power on a platform of providing a better deal for indigenous peoples and doing away with colonialism and neo-liberalism.

The cardinal, who has been beset by health issues but will host Pope Francis in his home, denounced Morales’ persecution of political opponents and way of doing politics.

“In his homilies, (the cardinal) always defended the people, defended democracy in a tone that the government didn’t like,” said Julieta Tovar, spokeswoman for the papal visit in the city of El Alto. “(Morales) is always sticking it to us. He says that he’s only against the church hierarchy, not the people. That’s a lie.”

A spokesman for the Movement Toward Socialism said the bad blood was the product of the church meddling in political matters, not anti-Catholic attitudes.

“There were difficulties in exchanging ideas,” said Victor Morales, president of the party’s national policy commission. “The president’s reservations were that (they) wanted to do politics from their churches.”

Some in the church take a longer view of history and point to problems with prior Bolivian presidents, who expressed unhappiness with priests’ public positions — which included denunciations of military rule.

The church has played a historically important role in Bolivia by providing health care and education in areas the state has been unable or unwilling to do so. Bishop Scarpellini said the church has signed “more than 1,500” agreements to provide social services.

A new constitution approved in 2009 declared Bolivia a lay state and led to church suspicions its role in education and health would be reduced and that the government wanted to supplant Catholicism with Andean religious customs.

“The idea of Evo wanting to destroy the church and revitalize these indigenous religions … this goes away because of this (papal) trip,” said Rafael Archondo, director of Jesuit-run Agencia de Noticias Fides news service.

Some signs of improved relations are already showing. The church and government jointly organized the papal visit. Morales attended a meeting of the Bolivian bishops’ conference earlier this year and received a standing ovation. It was the first formal meeting between church and government officials in “five or six years,” Bishop Scarpellini said.

“We have two words we’re using as a guide for this visit: renovation and reconciliation,” the bishop said. “The promise from both sides, and I hope we make good on it, is that after the pope’s visit we will continue sitting down together to tackle topics on the social agenda … that are of a common interest and in which the church is very involved.”

PREVIOUS: In democracy, all groups must have voice, pope tells Ecuadorean leaders

NEXT: Greek archbishop hopeful for new deal to save his country’s economy