Pope calls on Bolivian priests, religious to remember their roots 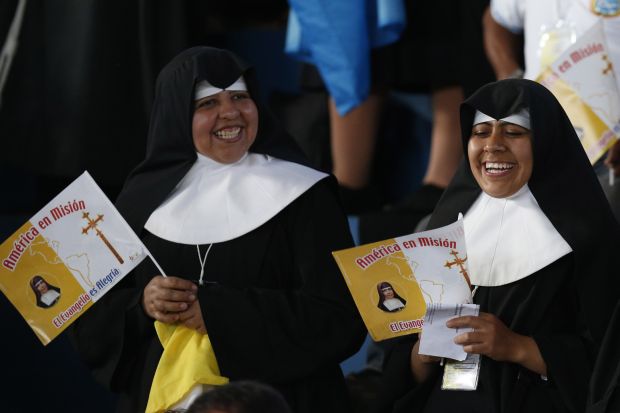 Nuns participate in entertainment before Pope Francis' arrival for a meeting with priests, religious men and women, and seminarians in the Don Bosco school in Santa Cruz, Bolivia, July 9. (CNS photo/Paul Haring)

SANTA CRUZ, Bolivia (CNS) — Speaking to an audience of Bolivian priests, men and women religious and seminarians, Pope Francis called on them to avoid appearances and superficiality, saying it prevented them coming close to the people they serve.

He also urged the audience, which serves struggling populations in one of the poorest countries in the hemisphere, to never forget their origins or trade popular parlance and humility for elitist trappings designed to differentiate and separate them.

“Give thanks for memory,” the pope said July 9 in the city of Santa Cruz, alluding to the audience’s origins. “Don’t forget where you were pulled from. They pulled you from the back of the pack. Don’t ever forget that.”

The admonishment was another example of the model of a poor church, serving the poor and peripheral places, which Pope Francis has promoted since his election in 2013.

The pope’s three-day trip to Bolivia has assumed political overtones as church and state in the country have had an uneasy coexistence since President Evo Morales was elected a decade ago. Morales, meanwhile, has mixed politics into his public appearances with Pope Francis.

The meeting with priests, religious and seminarians focused on spiritual matters as the pope prodded the audience to avoid indifference and a sense of self-satisfaction with status. It was delivered to a church struggling with vocations as young men are staying away from seminaries and young women are not enrolling in religious life.

“Don’t forget your roots, this culture that you learned from your own people because you have a more sophisticated, more important culture,” Pope Francis said. “There are priests who are ashamed to speak people their original language” — often indigenous — “because they now talk so fine.”

For his speech, Pope Francis drew on the story on responses to the blind beggar Bartimaeus, who, according to the book of Mark, sat on the side of the road called out as Jesus approached. His calls, the pope said, were met with three reactions: “They passed him by; they told him to be quiet; and told him to take heart and get up.”

Each reaction was expanded on the by the pope, who said the story “is still very current.”

“Passing by is the response of avoiding other people’s problems because they do not affect us,” Pope Francis said. “We have the temptation here to see suffering as something natural, to take injustice for granted” or simply say, “That’s not my problem.”

The pope cautioned against “the spirituality of zapping” — a reference to those always being on the go, “but have nothing to show for it” and never connecting deeply with others.

“To pass by without hearing the pain of our people, without sinking roots into their lives and into their world is like listening to the word of God without letting it take root and bear fruit in our hearts,” he said. “Like a tree, a life without roots is a one which withers and dies.”

The response of silencing the other person “recognizes” they are there, but reflects scolding, Pope Francis said.

Some leaders “continually scold others … tell them to be quiet,” he said. “They hear, but they don’t listen.”

“They separate themselves from others,” the pope said, “and have made their identity a badge of superiority.”

Pope Francis used the Spanish word “animo” (“take heart”) to describe the third response. Jesus responded to Bartimaeous by asking what he could do for him. The approach of asking questions, the pope says, “gradually restores the dignity that had been lost” and develops a relationship.

“Far from looking down on him, Jesus was moved to identify with the man’s problems and show the transforming power of mercy,” the pope said.

The speech in the Don Bosco Coliseum was part papal talk, part pep rally. Speakers addressing the event acknowledged the challenges for a church in Bolivia, which has traditionally not attracted as many native-born clergy as needed and has stepped up to meet social needs in the absence of the state.

Damian Oyola Ramos, who was born into a family of miners and entered the seminary after finishing a law degree, told the event that there were only 124 seminarians studying at the moment — in a country of approximately 11 million people.

One of the main reasons for the shortage of seminarians, says Bishop Eugenio Scarpellini of El Alto, is that the priests traditionally came from rural areas or less-affluent sections of cities, and the priesthood was seen as a way of achieving a certain social status.

“The way to get ahead now goes down different roads,” Bishop Scarpellini said. “On one hand, there is a sharp reduction in the number of vocations. On the other, I would say that there has been a purification in the motives” of those entering.

NEXT: Pope to activists: Defend the earth, demand economic reform