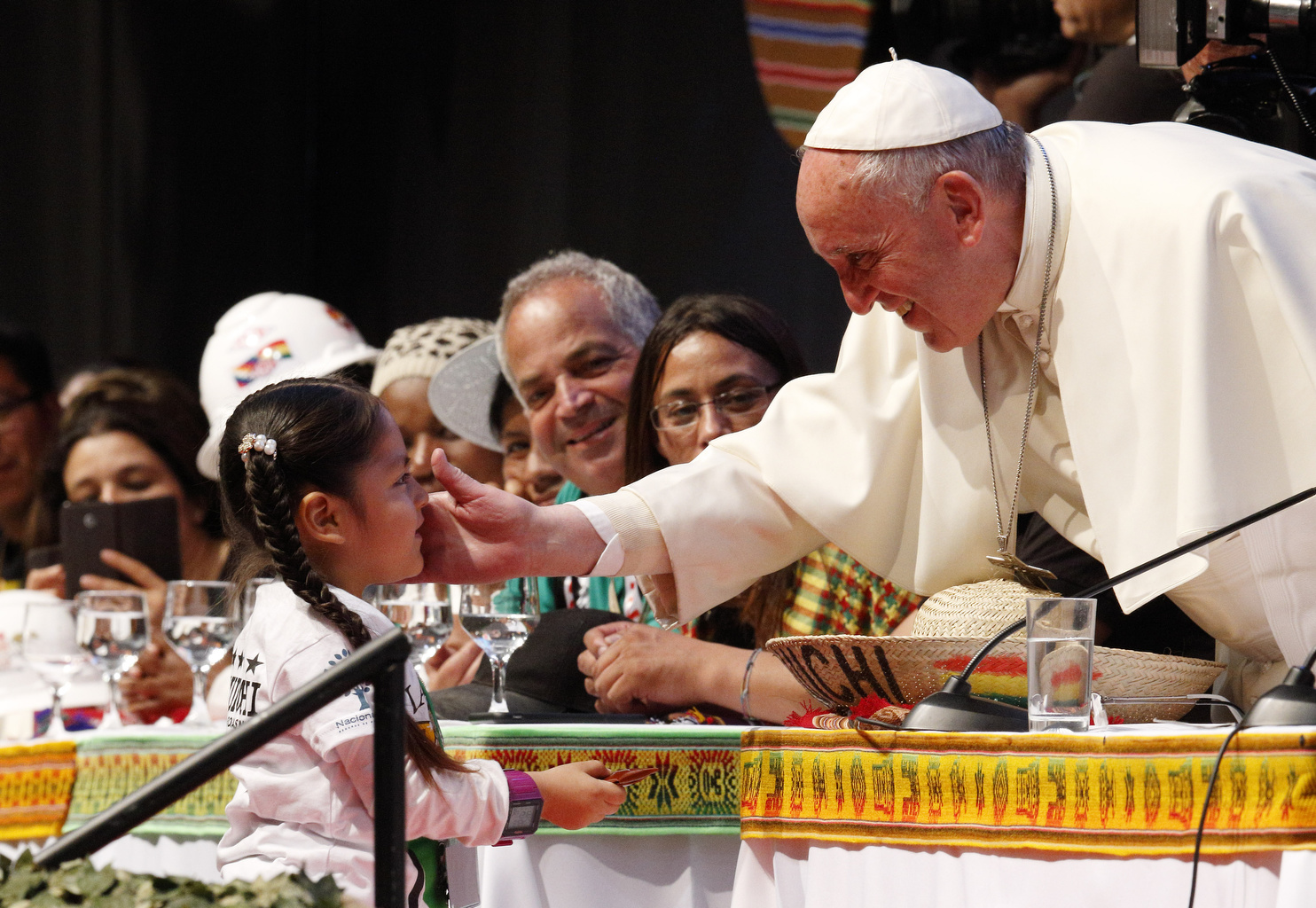 SANTA CRUZ, Bolivia (CNS) — Meeting with an international gathering of grassroots activists, Pope Francis not only encouraged, but tried to add fuel to their fire for “standing up to an idolatrous (economic) system which excludes, debases and kills.”

Addressing the World Meeting of Popular Movements in Santa Cruz July 9, Pope Francis acknowledged he did not have a “recipe” for a perfect economic-social-political system, but he said the problems with the current system are obvious and the Gospel contains principles that can help.

The activists — including labor union representatives and people who organize cooperatives for the poor who make a meager living recycling trash or farming small plots or fishing — combat “many forms of exclusion and injustice,” the pope said.

“Yet there is an invisible thread joining every one of those forms of exclusion,” the pope said. They all are the result of a global economic system that “has imposed the mentality of profit at any price, with no concern for social exclusion or the destruction of nature.”

At the meeting, sponsored by the Vatican and organized with the help of Bolivian President Evo Morales, Pope Francis shared the sense of urgency shown by participants, who adopted a long statement of commitments promising to mobilize in the defense of the rights of the poor and of the Earth.

“Time, my brothers and sisters, seems to be running out; we are not yet tearing one another apart, but we are tearing apart our common home,” the earth, he said.

“Perhaps the most important” task facing the world today, the pope said, “is to defend Mother Earth. Our common home is being pillaged, laid waste and harmed with impunity. Cowardice in defending it is a grave sin.” 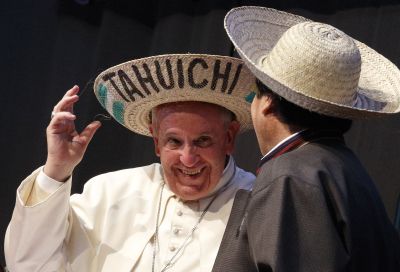 “Today, the scientific community realizes what the poor have long told us: Harm, perhaps irreversible harm, is being done to the ecosystem,” Pope Francis said. “The earth, entire peoples and individual persons are being brutally punished” by the effects of pollution, exploitation and climate change.

“And behind all this pain, death and destruction there is the stench of what Basil of Caesarea called ‘the dung of the devil’ — an unfettered pursuit of money,” the pope said.

When money becomes a person’s god, he said, greed becomes the chief motivator of what people do, permit or support. In the end, he said, “it ruins society, it condemns and enslaves men and women, it destroys human fraternity, it sets people against one another and, as we clearly see, it even puts at risk our common home.”

In a talk that had harsh words for those who exploit the poor or destroy the environment, Pope Francis also very formally spoke to the indigenous people present about the Catholic Church’s cooperation with the Spanish and Portuguese who settled much of the Americas.

At the same time, Pope Francis asked the meeting participants to recognize that many Catholics — priests, nuns and laity — willingly gave their lives in service to the continent’s peoples.

Most people, including the poor participating in the Santa Cruz meeting, he said, wonder how they can make a difference in the face of such huge problems and an economic system that seems to shrug off any effort at accountability.

The pope urged participants to look to Mary, “a humble girl from small town lost on the fringes of a great empire, a homeless mother who turned an animals’ stable into a home for Jesus with just a few swaddling clothes and much tenderness.”

The pope and the Catholic Church do not have a program or “recipe” for solving the problems of injustice and poverty in the world, he said. But it is clear that the economy should be “at the service of peoples. Human beings and nature must not be at the service of money.”

The change the popular movements are working for and the inspiration for Catholic social justice efforts cannot be an ideology, he said; it must be about people.

A person with a heart, the pope said, is moved not by cold statistics, but by “the pain of a suffering humanity, our own pain, our own flesh.”

Pope Francis said the goal must be the creation of “a truly communitarian economy, one might say an economy of Christian inspiration.” Its hallmarks are respect for human dignity, guaranteeing a right to land, housing and work, but also access to education, health care, culture, communications and recreation.

“It is an economy where human beings, in harmony with nature, structure the entire system of production and distribution in such a way that the abilities and needs of each individual find suitable expression in social life,” he said.

Such an economy is not a dream, he said. The people, the talent and the resources exist.

In working toward a new economy, Pope Francis called the popular movements “social poets,” people who are “creators of work, builders of housing and producers of food, above all for people left behind by the world market.”

One does not need to be rich or powerful to impact the future of humanity, he said. The future “is fundamentally in the hands of peoples and in their ability to organize.”

“Keep up your struggle and, please, take great care of Mother Earth,” the pope told the gathering. “I pray for you and with you.”

At the end of his 55-minute speech, Pope Francis made his customary request that his audience pray for him, but knowing that many of the meeting participants are not believers, he asked those who cannot pray to “think well of me and send me good vibes.”

NEXT: At Bolivian prison, pope calls himself man ‘saved from his many sins’