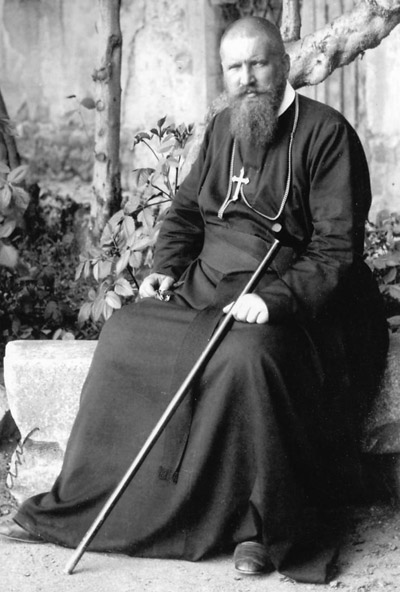 Metropolitan Andrey Sheptytsky, who led the Ukrainian Catholic Church in the tumultuous period of both world wars and at the beginning of Soviet occupation, has been declared “venerable” by Pope Francis. Metropolitan Sheptytsky is pictured in an undated portrait. (CNS)

VATICAN CITY (CNS) — Pope Francis has signed a decree declaring “venerable” Metropolitan Andrey Sheptytsky, who led the Ukrainian Catholic Church in the tumultuous period of both world wars and at the beginning of Soviet occupation.

The pope July 16 signed the decree recognizing that Metropolitan Sheptytsky heroically lived a life of Christian virtue. The recognition is an initial step in the sainthood process; the Vatican would have to recognize a miracle attributed to his intercession in order for a beatification ceremony to be scheduled.

Metropolitan Sheptytsky led the Ukrainian Catholic Church from 1901 until his death in 1944. During his leadership Ukraine and its people were ruled by seven different regimes: Austrian, Russian, Ukrainian, Polish, Soviet, Nazi, and finally, the Soviets again.

Ukrainian Catholic Bishop Borys Gudziak of Paris told Catholic News Service that while the process for his sainthood opened five decades ago, it was only with the independence of Ukraine in 1991 that church historians and theologians had access to all his archives. The study required for the sainthood process was not possible while Ukraine was still part of the Soviet Union.

“It was a rich file,” Bishop Gudziak said. “Metropolitan Sheptytsky was involved in everything, so it took a long time to go through it all.”

“Metropolitan Sheptytsky lived in the house of the Lord and it had a high roof, open doors and open windows — he lived outside the box,” the bishop said. “He reached out to the Orthodox when ecumenism was not official church policy; he defended the Jews during the Holocaust; and he was close to artists, poets, intellectuals and writers.”

“Like Jesus, Metropolitan Sheptytsky had a very clear sense of his identity and his God-given dignity, which allowed him to be non-defensive and non-aggressive with others,” the bishop said.

Born Roman Aleksander Maria Sheptytsky July 29, 1865, in Prylbychi near Lviv, he took the name Andrey when he entered the Basilian Order.

Ukrainian Catholics around the world are celebrating the 150th anniversary of his birth, which Bishop Gudziak said, may explain the timing of the decree.

Elected major archbishop of the Ukrainian Catholic Church at the age of 36, he quickly became recognized as a social and cultural leader in a situation of great political uncertainty.

He died Nov. 1, 1944, just four months after the Soviets took definitive control of Lviv. Bishop Gudziak said, “The Soviets did not liquidate the Greek Catholic Church while he was alive.” The metropolitan’s stature was such that they permitted a public funeral for him, but five months after his death, they arrested all the bishops and moved toward declaring the Ukrainian Catholic Church illegal.

“His social teaching, his fine, subtle and prophetic voice allowed the church to survive,” the bishop said.

Father Peter Galadza, acting director of the Metropolitan Andrey Sheptytsky Institute of Eastern Christian Studies at St. Paul University in Ottawa, Ontario, also mentioned the metropolitan’s efforts to save Jews during the Holocaust — including by personally sheltering them — and his efforts to promote reconciliation among Ukrainians, Russian and Poles.

“It is also important to recall Sheptytsky’s commitment to the poor,” he said in a statement. “Born into an aristocratic family, the archbishop used his resources to create a free clinic, provide countless scholarships and help victims of famine, flooding and war. He personally lived a life of poverty.”

NEXT: Frustrations build among Christians in Iraq camp