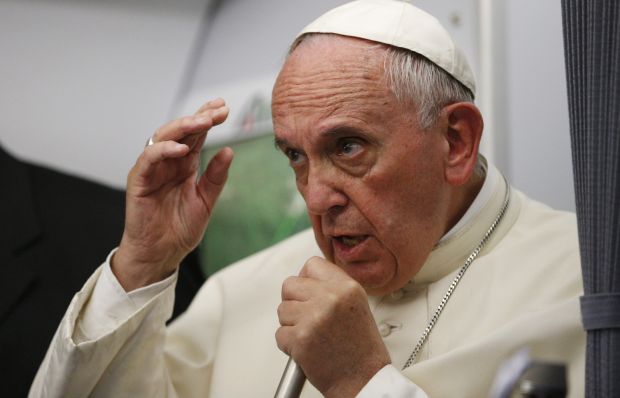 Pope Francis gestures as he answers questions from journalists aboard his flight from Asuncion, Paraguay, to Rome July 12. (CNS photo/Paul Haring)

ABOARD THE PAPAL FLIGHT FROM PARAGUAY (CNS) — Before arriving in the United States in September, Pope Francis said, he will study American criticisms of his critiques of the global economy and finance.

“I have heard that some criticisms were made in the United States — I’ve heard that — but I have not read them and have not had time to study them well,” the pope told reporters traveling with him from Paraguay back to Rome July 12.

“If I have not dialogued with the person who made the criticism,” he said, “I don’t have the right” to comment on what the person is saying.

Pope Francis said his assertion in Bolivia July 9 that “this economy kills” is something he believes and has explained in his exhortation “The Joy of the Gospel” and more recently in his encyclical on the environment.

In the Bolivia speech to grass-roots activists, many of whom work with desperately poor people, the pope described the predominant global economic system as having “the mentality of profit at any price with no concern for social exclusion or the destruction of nature.”

Asked if he planned to make similar comments in the United States despite the negative reaction his comments have drawn from some U.S. pundits, politicians and economists, Pope Francis said that now that his trip to South America has concluded, he must begin “studying” for his September trip to Cuba and the United States; the preparation, he said, will include careful reading of criticisms of his remarks about economic life.

Spending almost an hour answering questions from journalists who traveled with him July 5-12 to Ecuador, Bolivia and Paraguay, Pope Francis also declared that he had not tried coca leaves — a traditional remedy — to deal with the high altitude in Bolivia, and he admitted that being asked to pose for selfies makes him feel “like a great-grandfather — it’s such a different culture.”

The pope’s trip to Cuba and the United States Sept. 19-27 was mentioned frequently in questions during the onboard news conference. U.S. President Barack Obama and Cuban President Raul Castro publicly thanked Pope Francis and the Vatican last December for helping them reach an agreement to begin normalizing relations.

Pope Francis insisted his role was not “mediation.” In January 2014, he said, he was asked if there was some way he could help. “To tell you the truth, I spent three months praying about it, thinking what can I do with these two after 50 years like this.” He decided to send a cardinal — whom he did not name — to speak to both leaders.

“Months went by” and then one day, out of the blue, Cardinal Pietro Parolin, Vatican secretary of state, told him representatives of the two countries would be having their second meeting at the Vatican the next day, he said.

The new Cuba-U.S. relationship was the result of “the good will of both countries. It’s their merit. We did almost nothing,” the pope said.

Asked why he talks so much about the rich and the poor and so rarely about middle-class people who work and pay taxes, Pope Francis thanked the journalist for pointing out his omission and said, “I do need to delve further into this magisterium.”

However, he said he speaks about the poor so often “because they are at the heart of the Gospel. And, I always speak from the Gospel on poverty — it’s not that it’s sociological.”

Pope Francis was asked about his reaction to the crucifix on top of a hammer and sickle — the communist symbol — that Bolivian President Evo Morales gave him July 8. The crucifix was designed by Jesuit Father Luis Espinal, who was kidnapped, tortured and killed in Bolivia in 1980.

The pope said the crucifix surprised him. “I hadn’t known that Father Espinal was a sculptor and a poet, too. I just learned that these past few days,” he said.

Pope Francis said that he did know, however, that Father Espinal was among the Latin American theologians in the late 1970s who found Marxist political, social and economic analysis helpful for understanding their countries and their people’s struggles and that the Jesuit also used Marxist theories in his theology. It was four years after the Jesuit’s murder that the Congregation for the Doctrine of the Faith said plainly that Marxist theory had no place in a Catholic theology, the pope pointed out.

Father Espinal, he said, “was a special man with a great deal of geniality.”

The crucifix, the pope said, obviously fits into the category of “protest art,” which some people may find offensive, although he said he did not.

“I’m taking it home with me,” Pope Francis said.

In addition to the crucifix, Morales had given the pope two honors, one of which was making him part of the Order of Father Espinal, a designation that comes with a medal bearing a copy of the hammer-and-sickle crucifix.

Pope Francis said he’s never accepted such honors; “it’s just not for me,” he said. But Morales had given them to the pope with “such goodwill” and such obvious pleasure at doing something he thought would please the pope that the pope said he could not refuse.

“I prayed about this,” the pope told reporters. He said he did not want to offend Morales and he did not want the medals to end up in a Vatican museums storeroom. So he placed them at the feet of a statue of Mary and asked that they be transferred to the national shrine of Our Lady of Copacabana.

Pope Francis also was asked about his request in Guayaquil, Ecuador, that people pray for the October Synod of Bishops on the family “so that Christ can take even what might seem to us impure, scandalous or threatening, and turn it — by making it part of his ‘hour’ — into a miracle.”

The pope told reporters, “I wasn’t thinking of any point in particular,” but rather the whole range of problems afflicting families around the world and the need for God’s help for families.

PREVIOUS: Church is called to persevere in mission of welcoming all, pope says