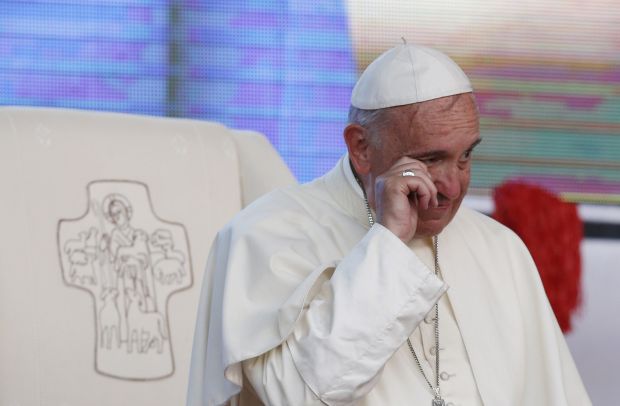 Pope Francis wipes his eyes as he leads a meeting with young people along the waterfront in Asuncion, Paraguay, July 12. (CNS photo/Paul Haring)

ASUNCION, Paraguay (CNS) — “Stir things up, but then help organize what you have stirred up,” Pope Francis told about 220,000 young people gathered on this city’s waterfront on July 12.

In his last major event before ending a weeklong trip to Ecuador, Bolivia and Paraguay, the pope spoke about service, solidarity, hope and freedom of heart.

Abandoning his prepared text, he based his remarks on the testimonials of two young people who asked him questions.

He also told the crowd that the young man who had read the Gospel, whom he identified only as Orlando, had asked him to pray “for freedom for each of us, for all of us.”

“Freedom is a gift from God, but we have to know how to receive it,” Pope Francis said. “Our hearts must be free.”

Liz Fretes, 25, told the pope how she put her life on hold to care for her mother, who had dementia, and her sick grandmother. Strained by studying in the evening and caring for her family by day, she found support among young people in her parish youth ministry.

Highlighting Fretes’ care for her mother and grandmother, Pope Francis emphasized two themes that he raised often during his trip, service and solidarity.

“Liz is fulfilling the fourth commandment, honor your father and your mother,” he said. “Liz is setting aside her own life in the service of her mother. That is an extremely high degree of solidarity, of love — a witness.” 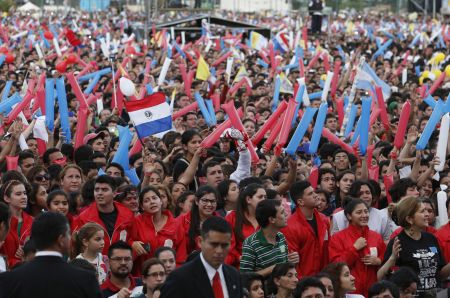 Youths wait for Pope Francis’ arrival for a meeting with young people along the waterfront in Asuncion, Paraguay, July 12. (CNS photo/Paul Haring)

When Manuel de los Santos Aguilar was a child, his parents turned him over to a family in the city — a practice not uncommon among rural families who hoped their children would get an education. Instead, the 18-year-old told Pope Francis, he was forced to work and fell into substance abuse.

He, too, found support in parish youth ministry, “where I met God, my strength,” he said.

“Life wasn’t easy for Manuel,” the pope told the crowd, but “instead of going out to steal, he went to work. Instead of seeking revenge for his life, he looked to the future.”

Those who have loving families can study and have what they need to live should give thanks to God, he said, leading the crowd in a prayer of “Thank you, Lord.”

Several times during his speech, the pope urged the young people to repeat his words.

He recommended reading the beatitudes, which he called “Jesus’ plan for us,” and echoed his exhortation from World Youth Day, when he told young listeners to “stir things up.”

He noted, however, that a priest had complained that when they stir things up, young people often make a mess that others have to fix.

“So before I leave,” he said, “first, pray for me. Second, keep stirring things up. Third, help organize the things you stir up, so nothing gets destroyed.”

NEXT: Church is called to persevere in mission of welcoming all, pope says