Across the U.S., parish life is changing 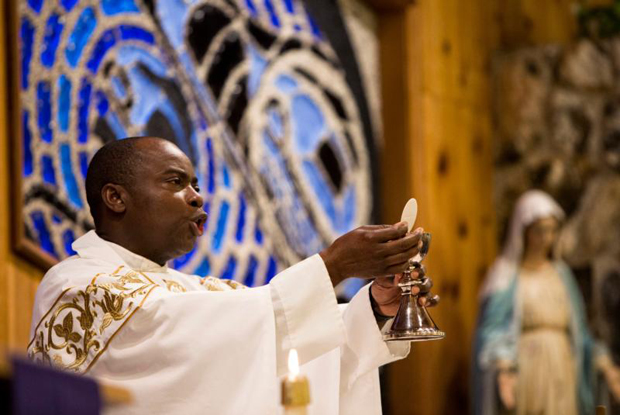 Father Jean Paulin Lockulu celebrates Mass at St. John by the Sea Church in Klawock on Prince of Wales Island in southeastern Alaska, April 16, 2014. The parish is one of the communjities profiled in the American Parish series by Catholic News Service. (CNS photo/Nancy Wiechec)

Starting today, we present the start of a Catholic News Service series on the American Parish. Over several years, CNS reporters fanned out to visit parishes from Alaska to New Jersey to look at the different ways parishes have adapted to an era of declining numbers of priests and increasing cultural diversity.

WASHINGTON (CNS) — If Pope Francis were to have time on his U.S. visit in September to stop at “typical” parishes, it might take a week or two just to see a representative sample.

Of course, while no two parishes anywhere in the world are exactly alike, North American Catholics who grew up in the middle of the 20th century likely would have felt more or less at home at the time visiting most churches around the United States.

The average parish of those decades probably was not unlike the version found in movies such as “Going My Way,” the Bing Crosby classic. In such parishes, “Father” was in charge of a smooth-running operation, with a couple of priests to assist him. Likely, “Sister” and other religious women ran the school. A handful of laypeople had minor parish support roles, but mostly the laity was found in the pews, bringing their children to school or supporting the church through bingo, carnivals and pancake breakfasts.

Today, changing demographics of the U.S. Catholic population have brought a great deal of variety to parishes — the U.S. church is now 40 percent Latino, a proportion that is rapidly increasing. Fewer Catholics feel compelled to have the kind of every-Sunday commitment to Mass that previous generations did. And an increasingly secularized, mobile and multicultural society has ended the days when one’s neighborhood or the country where one’s parents were born dictated what church the family attended.

But perhaps more than anything else, the changes in the way Catholic parishes function is a byproduct of the dramatic shift in the number of priests. Nearly one in five U.S. parishes lacks a resident priest pastor, according to Georgetown University’s Center for Applied Research in the Apostolate. In about 430 parishes — 2.5 percent of all U.S. parishes — the management is in the hands of a deacon or layperson such as a parish life coordinator.

In a project intended to provide a snapshot of some of the ways the U.S. church functions, over the course of three years, Catholic News Service reporters visited a cross-section of parishes around the country. The churches were chosen because they represent particular types of communities and certain models of parish management.

(See a related story: From flush to floundering, parish finances run the gamut)

In an unexpected bit of overlap, it turns out that the first parish visited, St. Francis of Assisi in the white, middle-class Midwestern manufacturing town of Manitowoc, Wisconsin, regularly sends parishioners on a summer mission trip to the last parish CNS visited, another St. Francis of Assisi, this one home to mostly African-Americans and Hispanics in the poverty-stricken, rural southern town of Greenwood, Mississippi.

— St. Francis of Assisi in Manitowoc, a mid-size parish in a small, traditionally blue-collar city where more than half the population is at least nominally Catholic. A decade ago, the leaders of the town’s six Catholic parishes saw the clergy shortage handwriting on the wall and worked with the Diocese of Green Bay to decide how the church in Manitowoc would adapt to having fewer than six priests to staff six churches. The result: All six churches were closed — “suppressed” is the church terminology — and a new citywide parish was formed.

It uses three of the existing churches as worship sites and has a central parish office. The pastor and two other priests live one each in three rectories and they rotate as presider at the three sites. Ten years into the change, things seem to be working pretty smoothly, at least in part, perhaps, because of the deliberate, collaborative approach to the restructuring.

— The Church of the Sacred Heart in South Plainfield, New Jersey, which looks on the surface like a typical urban neighborhood church with a parish school. What had long been a home for Irish, Italian and Polish immigrants and their offspring now has just a single priest on the staff. He’s assisted by two permanent deacons, who help handle sacramental responsibilities including weddings and funerals, and a Sister of St. Joseph whose position as pastoral associate includes coordinating ministries that a pastor and fellow priests used to manage.

Part of how Sacred Heart has evolved with the times is in its multicultural efforts. The parish of 2,100 households includes a diocesan-backed outreach to lesbian, gay, bisexual and transgender people, or LGBT, and it has become home to about 100 Filipino-Americans who have an active calendar of Filipino cultural activities.

— St. Ann Parish of Coppell, Texas, from a glance at the bulletin might seem to be a throwback to the days of plentiful priestly vocations. Father Henry Petter, pastor, has two priests and three permanent deacons to assist him. But at barely 30 years old, St. Ann has grown at a pace unheard of in many parts of the country. The largest parish in the Diocese of Dallas has more than 30,000 members in 8,900 registered families — more than the entire Diocese of Rapid City, South Dakota.

With more than 100 ministries, this “megachurch” had a budget of more than $7 million in 2014. With no parish school, St. Ann has 2,500 children in religious education programs, requiring 200 teachers and other volunteers, and the coordination of a dozen people on the parish staff, just for the religious education component.

— Holy Family Parish in South Pasadena, California, was until a few years ago a typical upper-middle class parish headed by a priest of the Archdiocese of Los Angeles. As is common in many western Catholic communities, where priests have never been as plentiful as in the East and Midwest, Holy Family had long been dependent upon laity in its ministerial, educational and social service functions. Among the parish’s many ministries is weekly Mass podcasts, made possible through a multimillion dollar television setup and volunteer help of parishioners whose day jobs are in the TV and movie industries. Its parish school had long been thriving, with waiting lists for each term.

When longtime pastor Msgr. Clement Connolly began considering his approaching retirement, he and parish leaders worked up a plan for how to replace him with a head of the parish who would fit in with their laity-driven ways. The answer: a lay woman, whose path to a master’s degree in theology started when she was studying to become a Catholic.

As parish life director, Cambria Tortorelli is the boss, including over two full-time priest-ministers and three other priests who assist in various ways, among them now-retired Msgr. Connolly. Their responsibilities lie almost entirely with sacramental matters and counseling. In addition, Tortorelli manages a paid staff of more than 30, including a communications director, a volunteer coordinator and the managers of the parish food panty and the staff of a bookstore that’s open six days a week.

— Our Lady of Redemption is a Melkite parish in the Detroit suburb of Warren, Michigan. Unlike Latin-rite parishes, those affiliated with the Eastern-rite churches in communion with Rome can pack up and move as their members move. That’s what Our Lady of Redemption did in the 1980s, leaving a longtime Detroit location, which would now be considered the inner city.

Even though the physical location of the parish of 350 registered households has moved, members’ dispersal throughout the metropolitan area is breathtakingly wide. Some parishioners head into Warren from near the state capital in Lansing, nearly two hours away. Our Lady of Redemption, in its quest to preserve the Melkite liturgical customs and family traditions, must do battle on two fronts: an aging population and the lure of a quick drive to a Latin-rite church, which some Michigan Melkites call, dismissively, the “American church.”

— The smallest parish by membership among those visited, and the most spread out, is St. John By the Sea, the sole parish on Prince of Wales Island in southeastern Alaska. The island — 135 miles long and 45 miles wide — can be reached only by boat or plane. The parish territory, slightly larger than the state of Delaware, has a total population of around 6,000 people, of which 2 percent are Catholic.

The main church in Klawock also serves people in the nearby town of Craig. There is a mission church 38 miles across the island in Thorne Bay, where sometimes only a couple of people show up for Sunday Mass. Mass is celebrated in Klawock, Thorne Bay and Naukati Bay at least once each week. There is mission outreach to six other outlying areas, with Mass celebrated at least once every three months in Whale Pass, Hydaburg and Kasaan.

The parish is in the Diocese of Juneau. Considered a mission diocese, it is not unusual for a priest to arrive by plane or kayak to celebrate Mass.

— St. Francis of Assisi Parish in Greenwood, Mississippi, was founded by the Franciscan friars to serve African-Americans in the midst of the ugliest days of the civil rights struggles in the South. At that time, Immaculate Heart of Mary parish across town, was, if not outright hostile to blacks, at best was perceived to be unwelcoming to them.

Today, the two parishes are presumed by townspeople to be moving toward an eventual merger. They already share a pastor, Franciscan Father Gregory Plata, and some functions such as religious education. St. Francis still focuses on the Mississippi Delta’s tiny population of black Catholics, as well as to a growing community of Spanish-speaking immigrants. Its school, created by the Franciscans to offer African-Americans a better education than was possible in segregated public schools, barely scrapes by financially.

Its enrollment is still composed primarily of Greenwood’s most underprivileged minority children, as wealthier families avoid the weak public schools by sending their children to a private, nonreligious school across town. While much progress has been made in moving past the open hostilities of earlier decades, the members of the two parishes recognize they have work to do before the various communities of Greenwood feel like one parish family.

Stories in the series will look at the state of parish finances, clergy roles, education — both elementary schools and religious education programs — and some non-traditional ways parishes organize themselves today.

Dennis Sadowski, in South Plainfield, Mark Pattison in Coppell and Warren, and Nancy Wiechec in Klawock contributed to this story.

PREVIOUS: Voting Rights Act at 50: Difficult questions remain on who gets to vote

NEXT: From flush to floundering, parish finances run the gamut