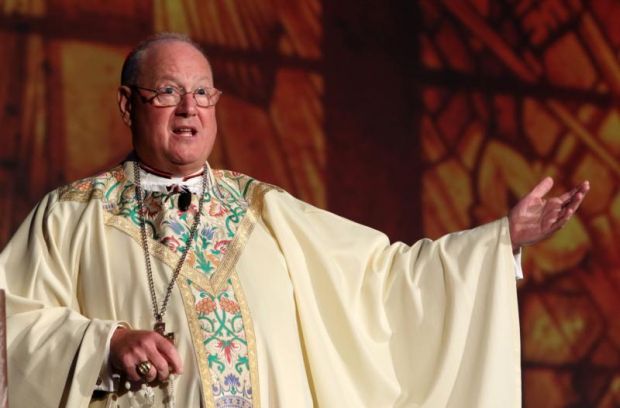 Cardinal Timothy M. Dolan of New York delivers his homily during Mass Aug. 8 at the Steubenville NYC youth conference at St. John's University in the Jamaica section of the New York borough of Queens. More than 1,800 teenagers attended the Aug. 7-9 event. (CNS photo/Gregory A. Shemitz)

The conference was held Aug. 7-9 at St. John’s University in the Jamaica section of the New York borough of Queens.

For Mass Aug. 8, about 50 priests and seminarians processed into a sports arena at the university to the sound of upbeat worship music as participants clapped and sang.

Cardinal Dolan charmed the youth with his trademark sense of humor early on in his homily.

“I’m a little uncomfortable today having Mass in a gym,” he said, gesturing toward his stomach, “because I don’t go to gyms very often. That’s all right, because nowhere are we more at home than to gather around the table of Jesus Christ.”

The cardinal preached about St. Dominic’s work with the Albigensians, a 12th-century sect.

“They had such a lofty concept of God, and they just went off the wrong track,” he said. “(They thought), ‘How could God leave heaven and enter this stupid, sinful, corrupt, dirty world?’ They said, ‘This Incarnation is a big, fat lie, and we don’t believe it. God could not have been conceived in the womb of a woman. God could not have sweated and cried and been nailed to a cross.'”

Eventually, St. Dominic convinced the Albigensians the Incarnation was real.

“If we could restore Mary to the minds and imaginations of people, then we’ll have no trouble restoring the truth of the Incarnation,” he said. “Mary prevents God from being a myth or just a nice idea or a concept.”

After Communion, Father John Parks of the Diocese of Phoenix told the young congregants a story about feeling distracted by construction work while he was trying to pray at St. Patrick’s Cathedral in New York. “I got a sense of the Lord saying, ‘I’m doing this in your spiritual life all the time. I want to transform you.'”

He told the teens that God yearns for them and is always speaking to them, and invited them to close their eyes and speak to Jesus during eucharistic adoration.

At a workshop for teens who graduated from high school this spring, speaker Paul George challenged participants to consider what type of faithful person they will be: “As life goes on,” he said, “it doesn’t get easier. It gets more complicated. You have to make some crucial decisions. Your decision for your faith, your relationship with God, is ultimately yours to make, and it’s a yes or no.”

Faith requires commitment, George said: “We often think faith is all about feelings and emotions, but some days, we don’t feel anything.” Knowing we are children of God means “you don’t have to seek out things from other people because you know who you are.”

He recommended plugging into a parish community, scheduling prayer time and reading about the faith.

Father Parks had similar advice in another workshop about authentically knowing God.

“How do we get to know anyone?” he asked. “You just talk to them. What if you had a friend who only called you right before they went to bed? How often do we do that to God? We just give Him the very last bit of our day.”

“Instead of seeking the Lord, we seek the loophole, and then we try to figure out why it goes wrong,” he said. “The church says, ‘I love you too much to leave you in the darkness.’ Even when you’re thinking you’re the one that’s pursuing God, I’ve got news for you: He’s pursuing you.”

Hart told the comical tale of chasing his escaped dog through the neighborhood in his underwear, only to realize that God must look at him the way he looked at his dog.

“(God thinks), ‘Every time I call your name, you run the other direction like a moron,'” Hart said. “‘You keep running to danger, where you’re going to die.’ Sin is death; it’s spiritual suicide. Sin destroys your ability to feel and experience God’s love. The Good Shepherd runs faster (than you).”

Some of the teens run from themselves; others, by expectations put on them by others, Hart continued. He predicted God would ask them to do something uncomfortable during the conference — “not because he’s trying to ruin your life, but because he’s trying to save it. God desires a relationship with you more than you could ever desire one with him.

“God’s ways are not too mysterious for you,” he said. “God doesn’t just love us. He likes us and gets a kick out of us.”

The Steubenville conferences are run by Franciscan University in Steubenville, Ohio, to promote life-changing relationships with Jesus and empower Catholics to live as his disciples. This summer, 55,000 teenagers were expected attend 21 youth conferences — a collaboration with Life Teen International — in the U.S. and Canada.

NEXT: Teens say Steubenville conference inspires and strengthens them