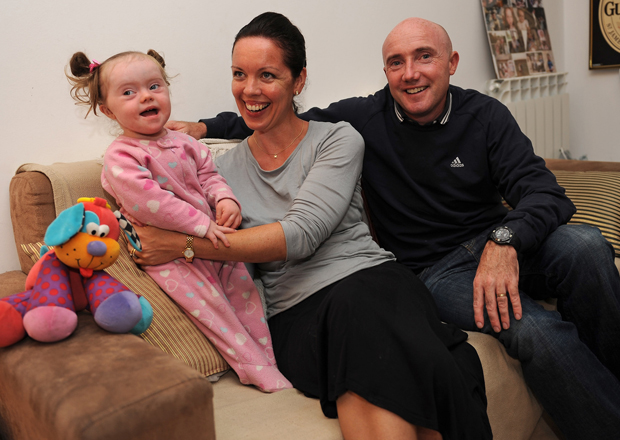 Theresa and Jerry Casey sit with their daughter Rachel, who has Down syndrome. (CNS file photo/Debbie Hill).

LEVITTOWN, Pa. (CNS) — The practice of killing the patient as a way to eliminate a disease is one way to describe aborting unborn babies who have been diagnosed with disabilities.

“It seems like the targeted elimination of an entire segment of the population,” even including infants who would be born with relatively minor problems, according to Niamh Ui Bhriain, one of the organizers of a July 4 rally in Dublin that drew between 25,000 and 30,000 participants and had as its theme “Every Life Matters.”

Ui Bhriain explained in a telephone interview with Catholic News Service that abortion is constitutionally prohibited in Ireland except in cases where continuing the pregnancy would threaten the life of the mother. But she said groups such as Amnesty International, the United Nations and Planned Parenthood, all of which portray access to abortion as a human right, are bringing more and more pressure to eliminate that protection.

Abortion has long been legal in nearby Britain, where even late-term abortion is considered a right if the infant has been diagnosed with a disability. An undetermined number of Irish women travel to the U.K. to abort their babies.

Disability is being used as a wedge issue, Ui Bhriain asserted, with the conversation focused on disabilities associated with Trisomy 18 and Trisomy 13, which often cause the death of an infant before or very shortly after birth, or anencephaly, in which major parts of the infant’s brain and skull are missing.

“The Trisomies,” subject to prenatal diagnosis in recent years, are disorders in which there is a third copy instead of the normal pair of a (numbered) chromosome in some or all cells of the body. Trisomy testing and testing for other conditions such as neural tube defects cannot accurately predict the degree of disability the condition will cause.

The one first widely diagnosed via amniocentesis and with which most people are familiar is Trisomy 21, better known as Down syndrome, which involves a very broad range of disability. The life span and quality of life of many people with Down has improved dramatically over the past few decades, with numerous people with Down now holding jobs and even living independently with minimal support.

Nevertheless in the U.K., 90 percent to 92 percent of infants diagnosed with Down are aborted, and the best estimates for the U.S. are about 67 percent overall, with significant regional variations.

Abortions are also performed in the U.K. and the U.S. in smaller numbers for such reparable conditions as cleft palate and clubfoot.

Ui Bhriain said that many medical professionals take a utilitarian position, holding that caring for babies with disabilities for whom there is no hope of cure is an inappropriate use of scarce medical resources.

But she said the sense at the July rally was that “we’re also enriched by giving compassionate care.” She quoted the mother of a disabled child who said, “These are the children who teach us how to love.”

Christopher White, director of research and education at the California-based Center for Bioethics and Culture Network, said it is now possible to test prenatally for hundreds of traits and abnormalities. Some couples, he said, opt for the testing because it might help them prepare for any abnormality or disease, and some prenatal testing allows for early intervention and treatment.

But, he said, “the fact that this technology is available to us makes it very difficult to draw lines,” and “we’re not so far from the slippery slope” toward designer babies. “The floodgates have been opened” and it is very difficult to predict and control the response to that, he added.

White said it is important to preserve and promote the technology that permits us to improve and protect the lives of prenatal children. But “perfection has become what is expected,” and he said parents and their disabled children are now often criticized.

In the U.S. Congress, Rep. Steven Palazzo, R-Mississippi, has for the second year introduced the Every Child Is a Blessing Act, currently in a congressional subcommittee. A statement provided by his office said that the bill would prevent the pursuit of “wrongful life” lawsuits in cases where parents say they should have been advised that their child would be born with a disability so that they could have aborted the baby.

Recently, a couple in Washington state was awarded $50 million; in 2008 a Massachusetts couple was awarded $8.22 million on the grounds that they would have aborted their child with Down syndrome; and in a 2007 Florida case, a couple whose child was born with a genetic disorder was awarded $23 million.

“No child should ever have to hear they should never have been born,” Palazzo, a Catholic, said in the statement. “Wrongful birth cases are a waste of judicial resources and amount to nothing more than court-sanctioned child abuse.”

Advocacy groups for those with disabilities have decried wrongful birth suits, and the bill, which has 39 House sponsors, has been endorsed by the National Right to Life Committee and Americans United for Life.

Mary O’Callaghan, a fellow of the Center for Ethics and Culture at the University of Notre Dame, holds a doctorate in developmental psychology and is the mother of five children including one with Down syndrome. In testimony she prepared to give last February to a committee of the Indiana state Senate she supported a bill that would ban abortion prompted by a poor prenatal diagnosis.

“Abortion is a shortsighted solution,” she wrote. “It doesn’t treat the disease, it eliminates the patient. Allowing widespread abortion of those with disabilities has shifted resources and attention away from prevention and treatment and has led to heavy investment in preventive screening.

“For example, the NIH (National Institutes of Health) allotted $18 million for research on Down syndrome in 2014. The state of California alone, however, has budgeted $117 million this year for prenatal screening. Finding long-term, lasting solutions to disability prevention and treatment is not only a better use of resources, but it is also a humane solution which upholds the dignity of those with disabilities.”

O’Callaghan wrote that allowing abortion in the case of disabilities can put undue pressure on mothers to abort their children, noting that a significant number of mothers reported pressure from their physicians to abort when they had prenatal diagnoses of Down syndrome.

She cited a “large scale longitudinal study of over 100 families” reporting more positive than negative effects of having a child with Down syndrome.