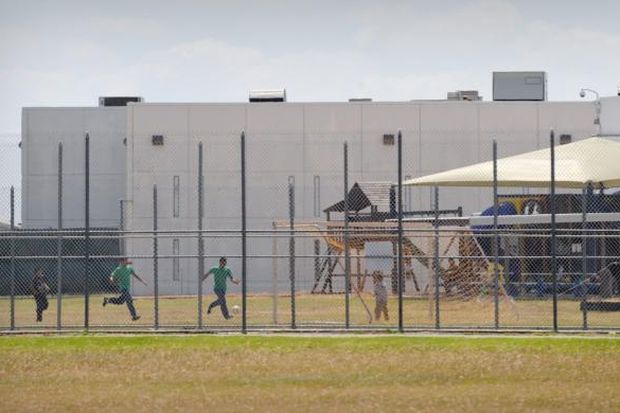 Children play in a double-fenced playground area in 2009 outside the T. Don Hutto Family Residential Facility in Taylor, Texas. The Catholic Legal Immigration Network and the Sisters of Mercy of the Americas decried the Obama administration's effort to have a judge set aside her orders for the release of families being held in immigration detention centers. (CNS photo/Bahram Mark Sobhani)

WASHINGTON (CNS) — The Catholic Legal Immigration Network and the Sisters of Mercy of the Americas decried the Obama administration’s effort to have a judge set aside her orders for the release of families being held in immigration detention centers.

Judge Dolly Gee of the Central California District Court in a July 24 ruling said the federal immigrant family detention system violates a court settlement over the treatment of juveniles held by the immigration agency.

Gee ordered the administration to release the children and their mothers who are being held in three detention centers in Texas and Pennsylvania unless they constitute a threat to others or a flight risk that cannot be mitigated by other means, such as ankle bracelet monitoring.

In a 50-page reply filed Aug. 6, the Justice Department asked Gee to reconsider her orders and allow Immigration and Customs Enforcement to continue to hold families for short periods while it is determined whether they have legitimate claims for asylum or can be deported. The administration argued that the detention centers serve a valid purpose in deterring other people from attempting to cross the border from Mexico without permission, though Gee had concluded there was no evidence to support that.

Jeanne Atkinson, executive director of the Catholic Legal Immigration Network, known as CLINIC, said in an Aug. 7 statement that the Justice Department’s response was disappointing.

She said the response “represents a continued defense of the inhumane practice of family detention.”

While the Justice Department said the times to process and release families had improved, “the fact remains that mothers and children are still facing significant obstacles to accessing justice,” Atkinson said. Attorneys affiliated with CLINIC and other pro bono legal agencies say families continue to be held for long periods of time, she said, despite “the much publicized government reforms.”

She acknowledged there have been improvements in the policies and practices for detaining families, “but the reality is that the family detention system simply presents untenable barriers to due process. The recent policy changes are no substitute for the need to end the deleterious practice of incarcerating families. Doubling down in defense of family detention is not the answer.”

The Sisters of Mercy of the Americas issued a statement saying its members “are appalled at this tactic that will prolong the detention of women and children seeking asylum.”

An Aug. 7 statement from Sister Patricia McDermott, president of the order, said “this system is immoral and inhumane and must end.”

It cited the firsthand experience by Sister of Mercy Kathleen Erickson in the South Texas Family Residential Center in Dilley, Texas, where she served two months as interim chaplain. During her time there, the population of detainees grew from 400 women and children to more than 1,000. The center is designed to hold up to 2,500 people.

“I have talked with mothers who cannot stop crying, who speak of how their children have changed while being held in detention,” said Sister Kathleen, “who talk of not being able to erase the image of dead bodies of family members being carried out of their home killed in the violence in their country of origin, of death threats they too received. Family detention exacerbates their trauma by holding them in a place unsuitable for children, with no understanding of when they will be released.”

The Sisters of Mercy statement said the nuns would continue to welcome and assist families if the shelters are closed.

“Our sisters, like many of our faith partners, were prepared to offer hospitality to dozens of families last year,” it said. “Initially, at the height of the crisis, the Department of Homeland Security requested the assistance of faith communities to host families. Then, with no explanation, our services were no longer required, and the Obama administration partnered with for-profit prison companies to open multiple family detention centers.”

Amid a rising outcry about the centers from religious institutions, legal and human rights organizations, and members of Congress, Homeland Security Secretary Jeh Johnson said in June, without being specific, that substantial changes would be made in the family detention program. Advocates said soon after that more families began to be released, but the Los Angeles Times reported that ICE aims to hold immigrants no longer than 20 days, if they have credible claims for asylum. It said the agency reported most are released in two to four weeks.

As of early August, about 1,400 parents and children were being held at the family centers, the Times reported.

PREVIOUS: In U.S. many expect pope to discuss ‘shameful plague’ of trafficking

NEXT: Forgiveness at heart of healing after Ferguson violence, says archbishop