Forgiveness at heart of healing after Ferguson violence, says archbishop 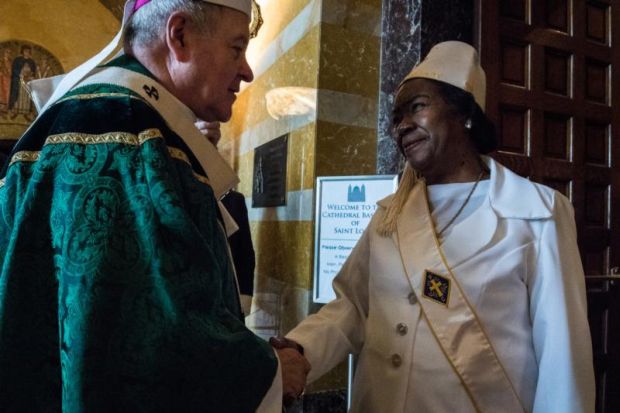 St. Louis Archbishop Robert J. Carlson greets Ophelia Wilson Court following a Mass for peace and justice Aug. 9 at the Cathedral Basilica of St. Louis. With a crowd topping 600, the Mass commemorated the first anniversary of the shooting death of Michael Brown, an African-American teen, in a confrontation with a white police officer. (CNS photo/Weston Kenney, St. Louis Review)

Such a simple word, a mere 11 letters but it’s at the heart of the Catholic faith, along with love, peace and justice.

“Jesus tells us that if we receive him as the bread of life, we will have his life within us,” Archbishop Robert J. Carlson of St. Louis said in his homily at a Mass for peace and justice Aug. 9 at the Cathedral Basilica of St. Louis. “He shows what this life means on the cross, when he forgives those who killed him.”

With a crowd topping 600, the Mass commemorated the first anniversary of the shooting death of Michael Brown, an African American teen, in a confrontation with a white police officer.

It also marked the 70 years since the United States dropped atomic bombs on the Japanese cities of Hiroshima (Aug. 6, 1945) and Nagasaki (Aug. 9, 1945) and caused an unprecedented loss of life.

“We know (the atomic bombs) inflicted tremendous human suffering,” Archbishop Carlson said. “Likewise, we know the events (in Ferguson) uncovered a culture of systemic racism, rage just below the surface of daily life, and a court system which failed to recognize institutional injustice in its manner of operation.”

But after the release of pent-up rage, what comes next? The real work begins with forgiveness.

“There is much that needs to be done in our work for … meaningful change and healing — fostered by a better understanding of the pain of others, our brothers and sisters in Christ,” Archbishop Carlson said. “If we ever hope to sit at a common table with our brothers and sisters — black or white, red or yellow, the color of the skin makes no difference — we need to ask God to bless us with the grace of mercy and love that we see in Jesus.

“When we receive him as the bread of life,” the archbishop continued, “we can let go of hate and hurts and grievances and forgive one another — a healing that interconnects with faith — and is the first step toward building relationships and assisting those who live in poverty.”

Archbishop Carlson said that healing and justice “can only be achieved in our respect for one another and our commitment to being with one another in the suffering.”

No one should let their brothers and sisters “bear their suffering alone,” he said, citing the day’s two readings as examples.

“As we read in the Old Testament, ‘This is what Yahweh asks of you: Only this, to act justly, to love tenderly and to walk humbly with your God,'” Archbishop Carlson said. “We are being invited to take the first step in a pilgrimage of trust, which begins when we are willing to admit our failures, ask pardon and seek the forgiveness of one another.

“And we cannot miss what St. Paul says in his letter to the Ephesians: ‘All bitterness, fury, anger, shouting and reviling must be removed from you, along with all malice.’ Instead he invites us to kindness and compassion and forgiveness — indeed, as God forgives us.”

That would be in the words to the “Our Father.”

Archbishop Carlson urged Mass-goers to remember the next time they recite the Our Father that “you ask God to forgive you to the same degree you forgive others.”

This is important, he said, “for the Christian message of love and justice.”

“Our message shows its effectiveness through the actions we take in the cause of justice in the world and especially here in St. Louis, our own backyard,” he added. “We will not gain any credibility as a people of faith if we refuse to serve those closest to us.”

In that regard, at the archdiocese’s first Mass for peace and justice some months ago, Archbishop Carlson had called for the formation of a Peace and Justice Commission. Its 27 members were commissioned during the Aug. 9 Mass.

Archbishop Carlson called them “dedicated men and women (who) will look at the challenges all around us and from a Catholic perspective provide pathways to change.”

He quoted Pope Francis, from his visit to Bolivia in July: “Working for justice is not simply a moral obligation for Christians, it is a commandment, an invitation that comes from Christ. Let us take that which divides us to the foot of the Cross, and before the Lord, commit ourselves to one another.”

Forgiveness also was front and center for an ecumenical prayer service held four days earlier at the grotto at Our Lady of Guadalupe Church in Ferguson. But the basic needs of life come first, said the pastor.

“How does one console another who has experienced an unspeakable tragedy? Often, there are no words,” Father John O’Brien said in a reflection at the service. “We respond by doing the most essential things: We express our presence and human connection; we bring food, we ask if they are getting enough rest, we pray for them.

“In the process of healing, we begin with the simplest things. … When we are hurting the most, we tend to forget the things that are most essential, the things we most need,” he explained.

“So often, the best counsel for someone who has hit bottom is to simply take the next step,” he continued. “Healing does not begin with grandiose strategies or enormous upheaval. Healing begins by focusing on the things we cannot fail to do.”

“Forgive and prophesy,” the pastor said. “These are divine obligations, and as such, God will give us the strength to do them.

Father O’Brien acknowledged the difficulty of forgiveness “after taking so many beatings, and yet this is what the Gospel demands. … Untie and loose the debt or it will keep doing harm. If you want to put an end to it, let go of it or it will continue damaging you.

Ferguson released the racial tension lurking just below the surface.

“There is a reason why this place has become the precipitator of questions regarding racism, prejudices, and human dignity,” Father O’Brien said.

In turn, the community must be “a prophetic catalyst of reform, renewal and reconciliation,” he said.

“May we become more transformed into a community of justice and peace, a place of acceptance and hope, a people that suffered and healed because of our willingness to forgive and our commitment to prophesy.”

NEXT: Finding self through service: The experience of long-term volunteers