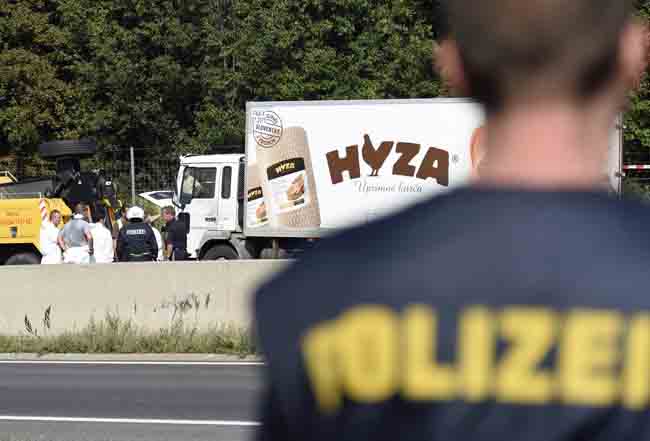 Forensic experts investigate a truck in which refugees were found dead on a freeway between Parndorf and Neusiedl, Austria, Aug. 27. (CNS photo/Herbert P. Oczeret)

VIENNA (CNS) — Austrian church leaders, reacting to the discovery of dozens of dead refugees on a truck near Vienna, said they hoped it would increase awareness of the plight of migrants.

“Such refugee suffering should awaken us, like a bolt from the blue, to the need for more generous attitudes and courageous decisions. The joint handling of the refugee tragedy in the face of such inhumanity is a test for European values,” Vienna Cardinal Christoph Schonborn, president of the Austrian bishops’ conference, told the Kathpress news agency Aug. 28.

“My sympathy is with those who’ve suffered this imaginably agonizing death, and I cannot find words for the contempt for human life shown by the traffickers,” he said.

Police in neighboring Hungary said Aug. 28 that they had arrested three Bulgarians and an Afghan in connection with the deaths of the 59 men, eight women and four children, whose decomposing remains were found by police Aug. 27 when a maintenance team reported the abandoned refrigerator truck.

Bishop Agidius Zsifkovics of Eisenstadt said Aug. 28 that he was praying for the refugees, all believed to be Syrians, who had fallen victim to “a smuggling network deprived of any scruples” and “a subtly complicit and failed European policy.”

“Europe has lost its innocence, and the idea of Europe as an area of peace, freedom and justice (has) been perverted by a lack of human vision by European elites,” Bishop Zsifkovics added.

“The cup is now full, and the horror of the refugee tragedy is now part of daily life for the countries of Europe. Suffocating and drowning children, women and men are no longer just distant events.”

Catholic leaders repeatedly have urged a more humane and effective policy by the European Union toward migrants and refugees, tens of thousands of whom have tried to enter Europe this year from conflict-hit regions of the Middle East and Africa.

A record number 107,500 migrants were reported to have crossed the EU’s borders in July alone; many paid large sums to smugglers to arrange their entry illegally.