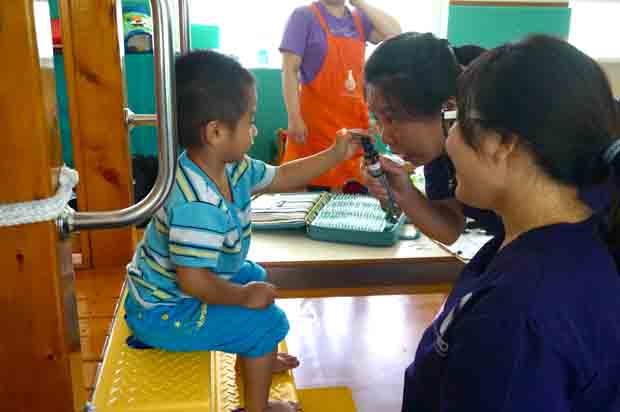 Instead, Kao and her friends, motivated by their Catholic faith, are using their skills to help poor people see in the Far East and even California’s San Joaquin Valley.

In the past three years, the Catholic nonprofit See the Lord has brought eyeglasses, and vision health care to thousands of poor people in rural areas of Taiwan, the Philippines and Sanger, California.

“I walked away knowing that God had a different path for me, knowing I was called to do missionary work at that point in my life,” said Kao, now 30. Kao decided the day her mother died in February 2011 after a nine-year bout with cancer that she had to “love big” with her life.

“There were a lot of people trying to talk me out of it,” she said.

When she quit all her jobs at age 28 in 2012, Kao was in full-time private practice, teaching at the University of California, Berkeley School of Optometry, and doing research for Google.

See the Lord is staffed almost entirely by volunteers, young professionals who became friends through their faith and involvement in the San Jose Chinese Catholic Mission in Santa Clara. Kao, the only one who works full time for the organization, receives a small stipend as chief executive officer. 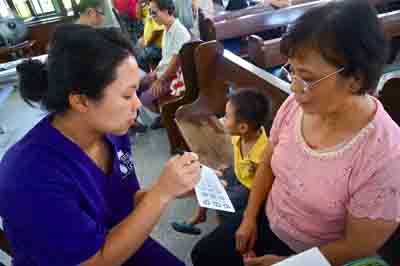 “I think it is the work of the Holy Spirit. What can bring young people to do this kind of thing if it is not the Holy Spirit?” said Father Carlos Olivera, pastor of San Jose Chinese Catholic Mission.

Since 2012 when incorporation of the nonprofit was completed, See the Lord has organized 12 mission trips with three more on the calendar for 2015. All but three of the trips have been to Taiwan where people in the rural mountain areas have little access to vision care. This year a U.S. trip is planned to New Orleans.

The Bay Area Chinese Catholic community supports See the Lord, said Kao, who grew up in San Mateo and attended St. Luke Parish in Foster City. The Mid-Peninsula Chinese Catholic Community at St. Matthew in San Mateo, where Kao’s father sings in the choir, is very supportive, as are St. Clare Parish in Santa Clara, and St. Joseph Church in Fremont, she said.

Most of those served in Taiwan are poor children, elderly and disabled people who find it difficult or impossible to travel the three or four hours to a town to get their eyes examined and frequently could not afford glasses if they were prescribed, Kao said. While Taiwan has national health care, it does not include vision care and optometrists are reluctant to travel to remote areas, she said.

“I was surprised by how nearsighted the children were;yet they did not even own a pair of glasses. I wondered how these children could function in daily life when they could barely see the largest shapes on the eye chart,” volunteer Elaine Oetomo, a mission volunteer in March 2013, said in a testimonial on the See the Lord website.

“People work out in the sun all day and have major sun damage or a tree branch has hit their eye and they have lost their vision,” said Jean Young, See the Lord spokeswoman.

See the Lord mission trips attract young adults, mostly Chinese Americans with some family connection to Asia, Young said. Many are not Catholic.

“We have students who are interested in optometry who go on these trips. We have people who just have a heart for the mission,” she explained.

“They are not always Catholic, that’s fine with us. We do Mass and we do prayers together. We don’t make it a criteria that you have to be Catholic,” Young said.

“They can use their talents. It lets young students and young professionals actually serve,” Kao said.

About 1 percent of Taiwan is Catholic, Young said.

Kao’s deeply religious and loving Catholic mother is a big part of the story, because it was some comments her mother made a few months before her death cancer that started Kao thinking.

“Her mother was like a saint, never complaining even though she was suffering,” Young said. “She said to Kelly — in Chinese, of course — my one regret in life is I don’t feel like I loved big. I wished I loved on a grander scale.”

The night her mother died, Kao said she had a vision of her mother asking her to use her talents on that grander scale. The next day Kao procured the website rights for See the Lord, although she said it took more than a year to get the nonprofit up and running.

“They are great people with a dedication to the mission of the church, of Jesus,” Father Olivera said. “They are good, good Catholics.” 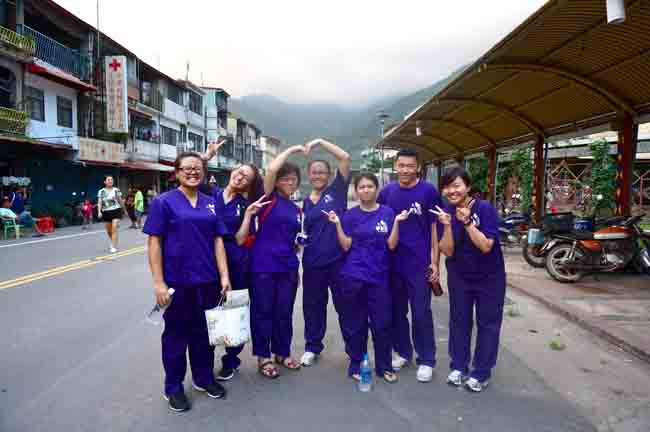