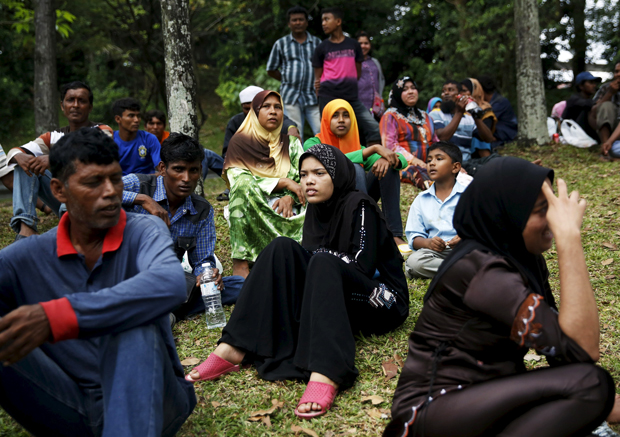 WASHINGTON (CNS) — Exploitation and discrimination abound among refugees from Myanmar’s ethnic minority communities who have landed in Malaysia, a five-member contingent from the U.S. Conference of Catholic Bishops learned.

The extent of the struggles facing the Rohingya people, Muslims who have been denied recognition by the Myanmar government, and other ethnic minorities was disappointing to experience, said Kristyn Peck, associate director of children’s services for Migration and Refugee Services at the USCCB.

Hundreds of refugees from Myanmar’s ethnic minority communities flood Malaysia each month in the hope of a better life, only to find themselves being exploited, ignored or trafficked for sex and labor. Many have left Myanmar because their pleas for basic rights have been ignored by longtime military rulers as well as by recently elected civilian leaders.

Some Rohingya have fled only to be trapped aboard boats at sea as countries have refused them entry.

The delegation also met refugees from war-torn Afghanistan, Iraq and Syria, all of whom are vulnerable to poverty, extortion and trafficking.

The contingent, including two bishops who chair USCCB committees, heard from immigrants, their advocates and Catholic and nongovernmental social service providers who described how non-Malay newcomers are often mistreated. In some cases, they are confronted on the street by police seeking bribes equal to about $12.50 under the threat of detention.

“The people who are fleeing Myanmar are so vulnerable to exploitation and trafficking while they’re seeking refugee status. That process of seeking protection takes years and years,” Peck said.

However, gaining refugee status does not guarantee that refugees are protected because Malaysia is not a signatory to the 1951 Convention and Protocol Relating to the Status of Refugees and they remain vulnerable until they leave the country,” Peck explained.

The USCCB delegation is considering recommending in a future report that the Malaysian government provide work permits, that more countries accept refugees and those nations accepting them boost quotas, she said.

“It is shocking. What I think is so upsetting to me we are familiar with these issues. We’re familiar with the suffering experienced by and how vulnerable immigrant and refugees are,” Peck told Catholic News Service in an interview from Kuala Lumpur, Malaysia, in mid-August, two weeks into a tour of four Southeast Asia nations that ended Aug. 20.

At a shelter outside of Kuala Lumpur — which Peck declined to identify because of the threat that traffickers would track them down — the contingent watched a performance by a small group of child refugees, all unaccompanied by an adult. Peck said it was readily apparent they were traumatized. Some had been forced to beg on the street;others had been forced to work for little or no pay while being mistreated by traffickers.

“We were advised they were not in a place to talk about their experience,” Peck said.

In other meetings, including with the U.N. High Commissioner for Refugees and Kuala Lumpur Archbishop Julian Leow Beng Kim and his staff, the USCCB representatives learned that detention “is not a great place.”

Despite several requests, the group was unable to meeting with Malaysian government officials to hear their point of view, Peck said.

“It would have been nice to have their perspective,” she told CNS.

Those reports will include one to the USCCB at its annual fall assembly in November. The findings also will be shared in meetings on Capitol Hill and with the Department of State when the status of Southeast Asia refugees is discussed.

Despite the difficulties facing refugees, the State Department upgraded Malaysia’s status on human trafficking from Tier 3, the lowest level, to the Tier 2 Watch List in its 2015 Trafficking in Persons Report.

Under the rankings, Tier 3 countries are considered those not adhering to standards under the Trafficking Victims Protection Act and are not taking steps to do so. Tier 2 Watch List countries do not comply with the act’s minimum standards “but are making significant efforts to bring themselves into compliance with those standards.”

The report said that the majority of people who are trafficked in Malaysia are among the 2 million documented and more than 2 million undocumented foreign workers in the country.

Sarah Sewall, undersecretary for civilian security, democracy and human rights at the State Department, said at a briefing when the report was released July 27 the upgrade reflects Malaysia’s efforts to reform its response to trafficking.

She cited reforming victim protection services, adopting a pilot project to allow a limited number of trafficking victims to leave government facilities for work, consulting civil society in drafting amendments to anti-trafficking laws and increasing trafficking investigations and prosecutions from 2013 to 2014 as positive steps.

Despite the increased prosecutions, the number of convictions declined, which, Sewall said, was cause for concern.

“We also remain concerned with the restrictions on victims detained in government facilities and in adequate efforts to address pervasive passport retention by employers,” she said. “The TIP Report documents these concerns and will continue to work over the course of the next year with the government to impress upon them and support their efforts for change.”

In Congress and elsewhere, talk has emerged that the upgrade came to allow Malaysia to fully participate in the Trans-Pacific Partnership trade deal being negotiated among the U.S. and Asian countries.

Sewall declined to address the issue, saying that the State Department assessed Malaysia’s status only as it pertained under the 15-year-old Trafficking Victims Protection Act.

Malaysia was the third stop on the USCCB contingent’s agenda. They also visited Myanmar, Thailand and Indonesia, exploring the status of minority communities, refugees, unaccompanied migrating children and people being trafficked for sex or labor throughout the region.

The contingent included Bishop Oscar Cantu of Las Cruces, New Mexico, chairman of the Committee onInternational Justice and Peace; Auxiliary Bishop Eusebio L. Elizondo of Seattle, chairman of the Committee on Migration; Kevin Appleby, director of migration and refugee policy for the USCCB; and Matthew Wilch, refugee policy adviser for the bishops.