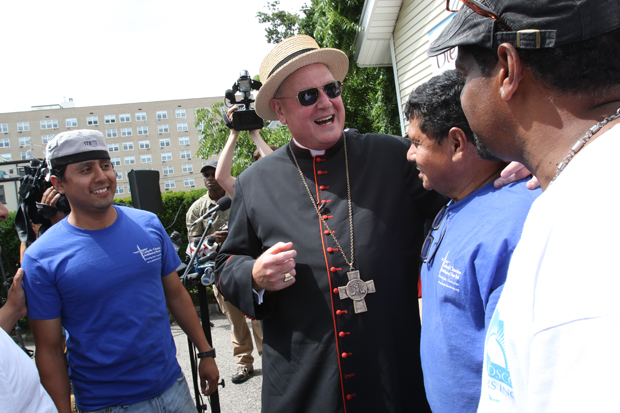 Cardinal Timothy M. Dolan of New York greets day laborers Aug. 6 in Port Chester, N.Y., where they are constructing a chair for Pope Francis. The chair will be used by the pope when he celebrates Mass at Madison Square Garden Sept. 25 in New York City. (CNS photo/Gregory A. Shemitz) 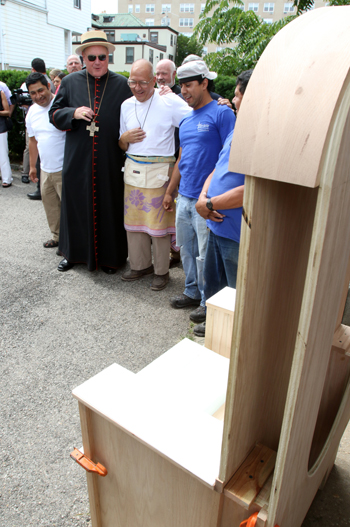 Cardinal Timothy M. Dolan of New York and Salesian Brother Sal Sammarco look at a chair Aug. 6 that Brother Sammarco and a team of Latino day laborers are constructing for Pope Francis in Port Chester, N.Y. (CNS photo/Gregory A. Shemitz)

The men are drawn from the ranks of two groups that champion fair wages, worker safety and skills training. Don Bosco Workers Inc. Mission in Port Chester and Obreros Unidos Mission in Yonkers are associated with Catholic Charities of the Archdiocese of New York.

At the same time, William Kelly, another master craftsman and wood-shop teacher, guides three teenagers at Lincoln Hall Boys’ Haven in Lincolndale. They are making the oak altar and matching ambo. Lincoln Hall is a Catholic Charities-affiliated educational center that provides residential and community services for boys and their families. Youth are assigned to the program by family courts throughout New York state.

“Obviously Madison Square Garden isn’t a church,” he said at Port Chester. Instead of buying furnishings or having them professionally made, Cardinal Dolan said he and others planning the Mass wanted to have them made by “people who are particularly close to the heart of Pope Francis.”

Specifically, they wanted to involve immigrants and troubled young people “who have beautiful skills and will use them for the glory of God and in the service of other people,” Cardinal Dolan said.

Brother Sal said his group worked from designs provided by the organizers and that are consistent with the pope’s desire to keep liturgical furnishings “humble, pure and poor.” 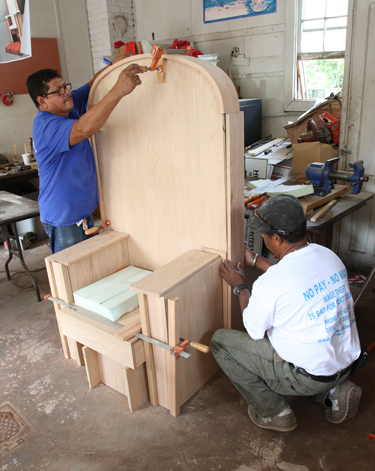 Day laborers Francisco Santamaria, an immigrant from Nicaragua, and Fausto Hernandez, an immigrant from the Dominican Republic, work Aug. 6 on a chair that will be used by the pope when he celebrates Mass at Madison Square Garden Sept. 25 in New York City. (CNS photo/Gregory A. Shemitz)

He said there will be no carvings or symbols on the chair, and that it will be covered with white canvas. “It’s not plush. It’s like eating at the kitchen table, not in the dining room,” Brother Sal told Catholic News Service.

Work on the chair will take about two weeks from start to finish. The elliptical curve at the top is the most challenging element, Brother Sal said.

The day laborers working on the chair are from Mexico, Nicaragua and the Dominican Republic.

Gonzalo Cruz, director of Don Bosco Workers, told CNS the project is “significant for us as Catholics. We represent justice for the workers and we’re happy to be a part of this.”

During Cardinal Dolan’s visit to the garage workshop, he got a preview of the altar linens that will be used at the Mass. Two women from Obreros Unidos showed him altar purificators they are embroidering with heart and dove designs to represent the Sacred Heart of Jesus and the Holy Spirit.

The project site is owned by the Communications Workers of America, Local 1103, which also provides meeting space for the day laborers’ organization to conduct safety training and other programs throughout the year. Kevin Sheil, president of Local 1103, told CNS, “The Don Bosco workers had been abused. We’ve had meetings with them over the last year and a half, offered assistance and helped them start their campaign against wage theft.”

Sheil admitted he thought it was a joke when he heard his day laborer colleagues would be building the papal chair at the local’s garage. Now the union is providing space, tools, water and meals, as needed.

“We’re unbelievably honored to be associated with this project,” he said. 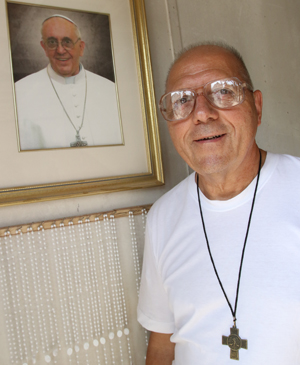 Salesian Brother Sal Sammarco poses next to a portrait of Pope Francis at a workshop in Port Chester, N.Y., Aug. 6. Brother Sammarco is overseeing a team of Latino day laborers who are constructing a chair that the pope will use when he celebrates Mass at Madison Square Garden Sept. 25 in New York City. (CNS photo/Gregory A. Shemitz)

At Lincoln Hall, the altar and ambo are being made in a brightly lit vocational building on the sprawling 454-acre campus.Wood-shop teacher Kelly said he chose the best students from last year’s daily classes to build the furnishings. He has been rewarded with a new level of persistence and engagement.

“They really wanted to be on this project. There’s already a change in their attitude and behavior. There’s no hand play or fighting, no problems now,” he said. “The trick is to get them interested in doing a project and then you can teach other things, including getting along with fellow students.”

Frank C., from Westchester County, told CNS, “I feel proud of myself to be doing this for the pope. It’s an honor I’ll tell my sons about. My family’s proud, too. They’re happy to see me do something good in my life.”

Byron D. from Nassau County, said, “I told my Mom yesterday and she didn’t believe it at first. She’s happy and excited and proud of me, and that makes me happy.”

He and the other worker gave only their first names and last initial.

Byron added, “I didn’t know how to cut, sand or stain before Mr. Kelly taught me.”

The students are looking forward to attending the Mass where their work will be put to use. Byron has worked on the ambo. He said if he met Pope Francis, he’d say, “It’s a pleasure to meet you. I’m happy to be here and it was an honor to make your stand.”

Cardinal Dolan toured the workshop with the teens and told them, “Way to go! You guys are following the footsteps of our Lord.”

Jack Flavin, executive director of Lincoln Hall, said boys generally stay at the school for “about a year.” They have academic and vocational classes, as well as therapeutic treatment, clinical services and health care. Young men who want to continue their education at trade schools or colleges are eligible for assistance through the Lincoln Hall Scholarship program.

“My favorite thing is seeing these kids working. They are so into it,” Flavin said. “They go home and tell their families, and come back and work harder!”

NEXT: Groups decry rising abortions for babies with disabilities