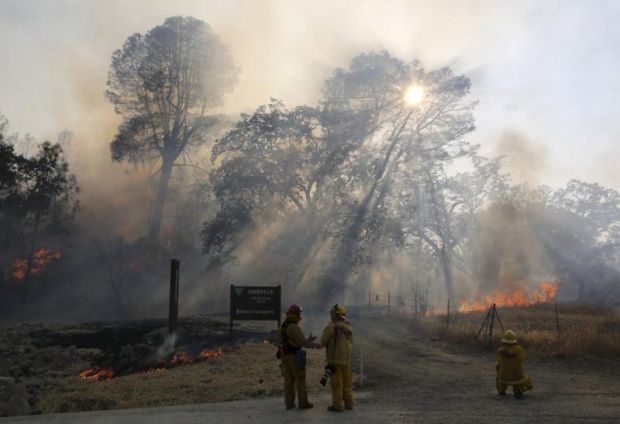 CHARLOTTE, N.C. (CNS) — The Conference of Major Superiors of Men overwhelmingly passed a resolution Aug. 7 committing to “a deeper engagement” to protect the earth and “cherish all creation.”

The conference, made up of leaders who represent more than 17,000 Catholic religious brothers and priests in the United States, laid out steps for member congregations to take in solidarity with Pope Francis’ call to action on climate change in his encyclical on the environment.

“With this act, CMSM commits to a deeper engagement on this issue and transforming practices in communities where they and their members live and minister,” the resolution said.

“The biblical vision with Christ in the center of our lives and communities, along with our vows and our mission as religious, calls us to see the urgency of this issue, not simply as a justice and peace concern but as embedded in who we are,” it said.

Action on the resolution, titled “Cherish All of Creation,” came during the annual CMSM assembly, held Aug. 5-8 in Charlotte. This year’s theme was “Celebrate the Year of Consecrated Life: Gratitude, Passion, Hope.”

U.S. men’s religious orders “have a long history of walking with those in most need,” the resolution said.

Quoting from the encyclical “Laudato Si’,” it added: “CMSM deeply feels the suffering of our ‘common home’ and all the creatures, each of whom ‘have a value of their own in God’s eyes.'”

The resolution calls religious brothers and priests to, among other things:

— “Change our lifestyle and personal habits, such as consuming less, creating community gardens, and eating less or no meat as we cultivate the virtues of an ‘ecological citizenship.'”

— Create dialogues on the issue and “preach and teach” about it.

— Increase reliance on green energy in communities’ various ministries and buildings and decrease reliance on fossils fuels in those areas, as well as “support these same commitments in any investment portfolios.”

— Advocate for significant policy changes at all levels of government to address this issue, “including a more equitable economic system.”

In his encyclical Pope Francis calls for a “broad cultural revolution” to confront the crisis of climate change and address the needs of the world’s poor communities as well as poor and marginalized people, all of whom are heavily impacted by assaults on the environment.

The CMSM resolution said men religious must “include the most affected community in our own deliberations toward improving our care for creation.”

“This is a positive and concrete way to accept and advance, in a proactive way, the challenge that Pope Francis has placed before all people” through his encyclical, said Father James Greenfield, an Oblate of St. Francis de Sales, who is CMSM’s president.

“We invite people of goodwill to join us in this liberating and holy practice,” he added.

Earlier in the assembly, delegates heard a keynote address by Cardinal Joao Braz de Aviz, prefect of the Vatican Congregation for Institutes of Consecrated Life and Societies of Apostolic Life.

He was unable to attend so his address was delivered by Indianapolis Archbishop Joseph W. Tobin, former secretary of the congregation.

Cardinal Braz encouraged the delegates to remember that “now more than ever, the presence of consecrated women and men in the church and the world can help contemporary culture ‘not to be afraid of happiness.'”

“With their guidance, this wish and goal can be brought to a deeper level, provided that consecrated men and women themselves are happy and fulfilled human beings, who testify to the fact that following God and living the Gospel is indeed a self-fulfilling experience,” he said.

Massimo Faggioli, assistant professor of theology at the University of St. Thomas in St. Paul, Minnesota, gave the second keynote address, speaking on “The Ecclesiology of Vatican II as a New Framework for Consecrated Life.”

In his presidential address, Father Greenfield said, “The ambiguities of life abound. How we respond to them as consecrated men obviously calls forth a prayer and discernment that brings us to address a key question … when discussing a sufficiency mentality. What is enough for me, for us, for our congregations?”

“Certainly, God’s mercy is enough,” he said. “We are enough. Our confreres are enough. And, perhaps most of all, Jesus is enough.”

In elections during the assembly’s membership meeting, delegates chose as president-elect Father Brian Terry, who is minister general of his order, the Franciscan Friars of the Atonement. He will be installed as president at the conclusion of the 2016 assembly.

Elected vice president was Father Joseph Rodrigues, U.S. provincial of his order, the Society of the Divine Savior, also known as the Salvatorian Fathers and Brothers. He begins a two-year term.