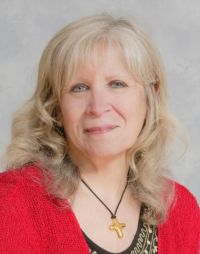 Sue Harvath, who has counseled post-abortive women in the St. Louis area for more than 30 years, is pictured in a 2013 photo. (CNS photo/courtesy of Kenrick-Glennon Seminary)

ST. LOUIS (CNS) — Women who have an abortion are being further victimized when given the option to donate their child’s body parts for research, according to Sue Harvath, who has counseled post-abortive women in the St. Louis area for more than 30 years.

Harvath said it shouldn’t matter whether Planned Parenthood is making money from the sale of fetal body parts, as alleged in a series of undercover videos, because even the act of obtaining the body parts is manipulative and flat wrong.

Harvath, a professor and director of psychological services at Kenrick-Glennon Seminary, is a founding member of Project Rachel, the archdiocese’s ministry to women who have had an abortion.

Project Rachel is coordinated by the archdiocesan Respect Life Apostolate, and there is a companion ministry for men who have been through an abortion experience, called Project Joseph.

Harvath said that women have an abortion because they’re in a state of trauma. They often find themselves overwhelmed with the responsibilities of caring for a new child or pressure from others to have the abortion. In those situations, best judgment and moral guidelines are set aside to cope with the trauma.

Denial also is an element of trauma, which serves as a protection, but also causes difficulty recognizing right from wrong. That’s why the pro-life movement has made advances in slowing down the abortion process for women, such as legislation that incorporates waiting periods and informed consent, she said.

“That gives them an opportunity to … just step back from the state of confusion that happens so much with trauma and be able to make a better decision,” Harvath told the St. Louis Review, archdiocesan newspaper.

According to a 2005 study from the Guttmacher Institute, nearly three-quarters of women surveyed said they couldn’t afford to have a baby.

Other reasons included that a baby would interfere with school/employment, a reluctance to be a single mother, having relationship problems, or being done with childbearing. Younger women typically said they were unprepared for motherhood, and older women cited responsibility to other dependents.

Guttmacher is a nonprofit organization that advocates access to abortion through research and other programs.

“The reality is that women don’t set out to have an abortion per se, but rather choose not to have a baby at that time,” stated Sharon Camp, then-president and CEO of the Guttmacher Institute. “For many women, it is the only decision they can make, given their circumstances.”

On Aug. 4, the fifth undercover video released by the Center for Medical Progress showed Melissa Farrell, director of research for Planned Parenthood Gulf Coast in Houston, discussing a potential partnership to harvest fetal organs with actors posing as representatives from a human biologics company.

Cecile Richards, president of the Planned Parenthood Federation of America, in a statement issued after the first video was released in mid-July, said that “allegations that Planned Parenthood profits in any way from tissue donation is not true.”

She later apologized for “the tone” the physicians used in describing abortion procedures and also argued the videos had been heavily edited to distort the truth.

The Center for Medical Progress urged viewers to judge the videos themselves, because all have been posted in their entirety on its website: www.centerformedicalprogress.org.

The videos have prompted calls for federal and state investigations of Planned Parenthood’s activities and for defunding the organization.

It receives more than $500 million of its $1.3 billion annual budget from federal and state programs. According to 2013 data, the latest available, Planned Parenthood says abortions represent 3 percent of the total services its facilities provide, which include dispensing birth control and doing some women’s health screenings. Supporters of Planned Parenthood say it meets the needs of low-income women who otherwise could not afford such services.

In a July 29 statement decrying Planned Parenthood, Boston Cardinal Sean P. O’Malley, chairman of the U.S. bishops’ Committee on Pro-Life Activities, also urged any woman traumatized by the news coverage of the videos to seek help from Project Rachel (www.projectrachel.com), which is nationwide.

In the St. Louis Archdiocese, both Project Rachel and Project Joseph include free, confidential and professional counseling, a monthly spiritual support group, a day of prayer and healing retreat for men and women, a weekend retreat for men and women, and spiritual direction and the Sacrament of Reconciliation. Last year, more than 650 free one-on-one professional counseling sessions were offered through the two projects.

Harvath has counseled women who have very little recollection of their abortion and what happened in the clinic, such as the paperwork to sign or hearing what the abortion entails. “They shut down emotionally and enter a state of denial to protect themselves from this process,” she said. “Sometimes they’ll say, ‘All I remember was the sheet that they covered me with.'”

Questions about what happened to the baby after an abortion usually don’t arise immediately. It might be the death of a loved one or a birth of another child years later that triggers what happened in the past.

“It’s never a lucid decision to take the life of your own child,” Harvath said. “It is an act that is contrary to everything in the female, about procreation and caring for their offspring. It’s such an unnatural thing, that women protect themselves psychologically.”

Organ/tissue donation is a valiant act, but it’s undermined when a child has knowingly been destroyed by another human being, said Harvath. “This is another bad process that’s being foisted upon these women,” she said. “It’s another way to sugarcoat a horrific event and to victimize women.”