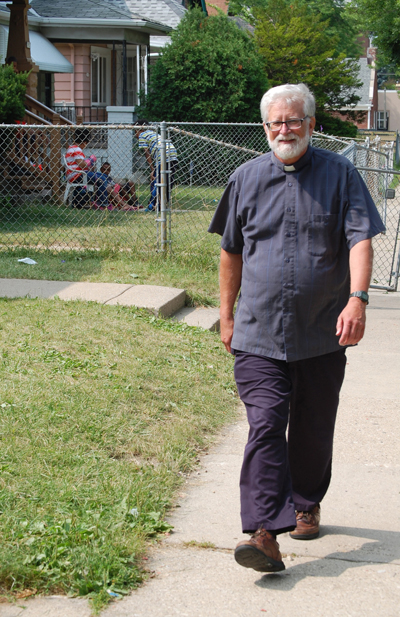 Father Bob Stiefvater, newly appointed pastor of All Saints Parish in Milwaukee, strolls through a neighborhood around the church on the city’s north side July 10. He takes a daily walk in an effort to get to know the neighborhood and to let neighbors know of the church’s presence. (CNS photo/Ricardo Torres, Catholic Herald)

MILWAUKEE (CNS) — Keysa Franklin was inside her home and her four children were playing outside in the front yard when Father Bob Stiefvater, dressed in his black clerical clothing and Roman collar, walked up and introduced himself to the kids.

Father Stiefvater, pastor at All Saints Parish on the north side of Milwaukee since June 16, takes daily walks in the community as a way for the neighborhood to know him, for him to know the neighborhood and to show the church’s presence in the area.

When Franklin stepped outside, she was surprised.

“He’s bold because I wouldn’t be walking this neighborhood,” she said, alluding to violence and crime in the area. “And I live over here.”

By the end of July, homicides in the city of Milwaukee numbered 89, more than the total for all of 2014. That violence has come within a few blocks of All Saints Church, but that doesn’t deter Father Stiefvater.

The sight of a priest in the community brings a special kind of peacefulness to a community in need of it.

“This is my first time seeing a priest walk around in the neighborhood, so it’s comfortable,” Franklin said.

For Father Stiefvater, that’s the goal.

Father Stiefvater spoke about an incident that occurred only a block away from the church — a person was dumped from a car after being shot.

Tommy Lee Grant was working on his truck in an alley when he saw Father Stiefvater walking toward him.

“It’s a great idea because a lot of priests don’t do that; it’s wonderful,” Grant said. “The way things are going on now in the neighborhood, we need more priests walking around.”

Father Stiefvater will talk to anyone he sees and will give each person his card. If the individual has questions, he does his best to answer them. He never wants to make assumptions, but he tells them about the meal program. And he’ll always remind them about the parish’s Sunday Masses.

The walks by Father Stiefvater are small gestures, but as the violence gets worse, parishes in the area are looking for additional ways to positively impact their communities and help end the violence.

Capuchin Franciscan Father David Preuss, pastor at St. Benedict the Moor and St. Martin de Porres parishes in Milwaukee’s central city, said: “There’s a fair amount of crime that touches us and our immediate neighborhood. Probably most of the murders that happen in our immediate vicinity are directly drug related.”

“A lot of this is getting this whole undereducated group into some degree of skill so that they can get jobs,” he said. “When you have that racism and economic segregation, it leads to alienation.”

Strict gun laws, Father Preuss added, might help curb some of the violence.

“There’s a sense that sometimes people who don’t live in the city don’t understand the effect ‘gun rights’ has on poor neighborhoods,” he said. “They see it from a different perspective and here, we’re on the receiving end of it.”

Father Preuss said people need to feel optimistic about their future, and until that happens, there will be more crime.

“You can’t have people that are poor and oppressed and hopeless and expect that it’s going to be peaceable,” he said. “Hopelessness breeds violence.”

No one parish or community group can alone completely tackle the issue of violence in Milwaukee.

In light of seven shootings in a span of 10 days, Milwaukee Archbishop Jerome E. Listecki announced he will celebrate a Mass for peace Aug. 13, followed by a candlelight vigil at St. Francis of Assisi Church in the central city.

In announcing the Mass, the archbishop said, “I am calling on our Catholic parishes to be beacons of light that shine in our community. I want our parishes and schools to be the collective force that creates a culture of peace and hope in southeastern Wisconsin.

“We begin by challenging the contemporary norm, that violence is simply a normal part of life in the city, in ‘those’ neighborhoods or anywhere. It is not and cannot be.”

Torres is a reporter at the Catholic Herald, a publication serving the Catholic community in southeastern Wisconsin.