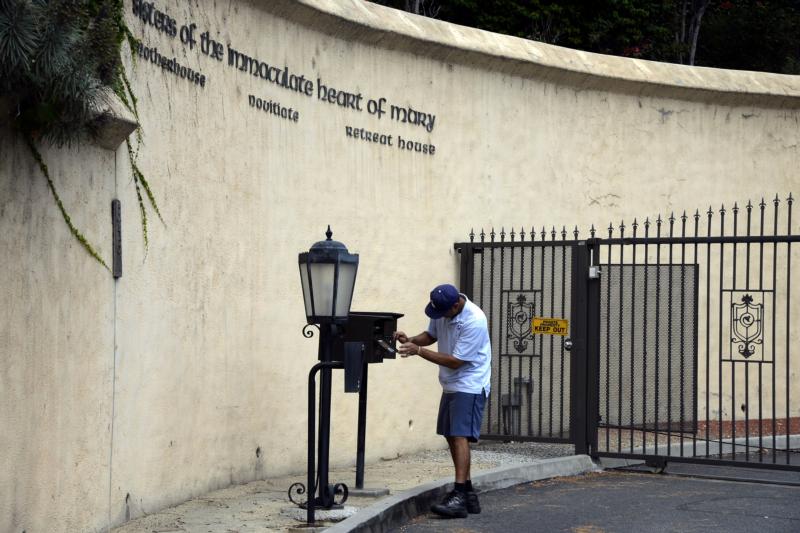 A postman delivers mail to the former Sisters of the Immaculate Heart of Mary convent in the Los Feliz neighborhood of Los Angeles July 23. Los Angeles County Superior Court James Chalfant ruled July 30 that the contested sale of the former convent to restaurateur and urban developer Dana Hollister is invalid.(CNS photo/Mike Nelson, EPA)

LOS ANGELES (CNS) — Los Angeles County Superior Court James Chalfant ruled July 30 that the contested sale of the former convent of the Sisters of the Immaculate Heart of Mary to restaurateur and urban developer Dana Hollister is invalid.

The judge also confirmed that the eight-acre, villa-style hilltop property located in the Los Feliz section of Los Angeles is Church property under the oversight of Archbishop Jose H. Gomez.

“I would like to reiterate my continued commitment to all of the Immaculate Heart sisters that the archdiocese will take care of them and ensure their well-being now and in the future,” the archbishop said in a recent statement.

The Los Angeles Archdiocese initiated legal action June 19 to protect the sisters by seeking to nullify the “unauthorized” transaction with Hollister.

In a recent deposition, Hollister confirmed that she took possession of the property for $100,000 (of which the sisters received only $44,000), and the balance of $9.9 million in a non-recourse promissory note, with no payments for three years.

The archdiocese contended that the sale violates the California law protecting the elderly from transactions that are not in their best interest — the five surviving Immaculate Heart of Mary sisters are between the ages of 77 and 88.

Because the loan is non-recourse, it does not require payment after the three years, the archdiocese explained in a recent statement. As such, if Hollister were unable to pay the remaining $9.9 million, the only remedy to get the property back would be foreclosure and the sisters would have to pay the related legal costs.

Other points of contention include the archdiocese’s lease of the buildings on the property for the priests’ house of prayer, which has a remaining term of 77 years, and Hollister’s reported plan to convert the villa property into a boutique hotel.

Chalfant set another hearing for Sept. 15 and ordered the lawyers to prepare proposals detailing possible remedies that would most benefit the five sisters. He said that Hollister may remain in possession of the property pending the hearing, but ordered her to pay $25,000 a month rent and stipulated that she cannot sell, lease or modify the property in the interim.

“The care and well-being of all five sisters has always been our primary concern,” said the archdiocese in a statement released shortly after the July 30 court ruling. “We were forced to take legal action to protect the sisters from the Dana Hollister transaction, which allowed Hollister to take possession of their property away from them.

“We are grateful that the judge found the sale to Hollister to be invalid, and that he agreed that this was a ‘bad deal’ for the sisters.”

Most of the sisters agree.

During July 29 interviews with The Tidings, the archdiocesan newspaper, three of the five — Sisters Jean-Marie Dunne, Marie Christine Munoz Lopez and Marie Victoriano — reiterated their unequivocal support for the archbishop.

All three sisters had previously signed declarations stating that they agree that the institute may not sell the property without the written approval of leadership in the archdiocese, as outlined in the institute’s amended articles of incorporation.

Further, the activities of the sisters are overseen by the archdiocese under orders issued in 2005 and 2013. Father Thomas Anslow was appointed as the legal agent authorized to act in all civil matters on behalf of the institute.

The remaining two sisters, Sisters Rita Callanan and Catherine Rose Holzman, disagreed and opted to move ahead with the sale to Hollister.

At the time of the unauthorized transaction, the archdiocese had already accepted an alternate offer from pop star Katy Perry, which was supported by Sisters Jean-Marie, Marie Christine and Marie Victoriano, for $14.5 million — $10 million in cash and $4.5 million for an alternative property for the house of prayer, which is to be owned by the sisters.

Continued litigation has left the sale in limbo, but all proceeds from any future final sale will be dedicated to the care of the sisters, according to the archdiocese.

“I am sad, frustrated and disappointed, because I feel this shouldn’t have happened; the sisters have no right to sell the property,” said Sister Marie Victoriano. “And I have never, never thought that the archbishop ever took advantage of us. … I would like to see the situation resolved as soon as possible.”

“The archbishop has counsel … and we feel that he knows more about selecting between the two (buyers),” she explained. She emphasized that her opinion isn’t being “suppressed” or coerced; rather, she agrees with the archbishop in part because Perry’s cash offer for the property versus “an IOU (is) a no-brainer.”

“And according to the decree … the archbishop can’t sell (the property) without us, and we can’t sell without him,” continued Sister Jean-Marie. “So all this wasting of money on lawyers, and wasting of everybody’s time — it’s just ridiculous.”

Sister Marie Christine said her position is simple and straight-forward: “As I say all the time, I am with (the archbishop), always with him.”

The sisters vacated the villa in 2011.

Despite having fond memories of her years in residence at the villa — feeding the squirrels outside, having educational retreats and celebrating her mother’s 90th birthday — Sister Jean Marie said she doesn’t feel a sense of loss nor overly sentimental at the prospect of selling the property.

“People are more sacred than the ground of the villa,” she said.

For Sister Marie Victoriano, who is enjoying her 60th year of consecrated life, living at the villa made her feel “as if I was near God, because it is a very peaceful place.”

“As I would take a walk in the morning, I would watch the sun rise from the east. … It’s an incentive to praise God,” she said, adding that she hopes the property will be sold to a buyer who will love it and “enjoy the beauty around them.”

Torres writes for The Tidings, newspaper of the Archdiocese of Los Angeles.

NEXT: Milwaukee parishes meet rising violence by walking and listening