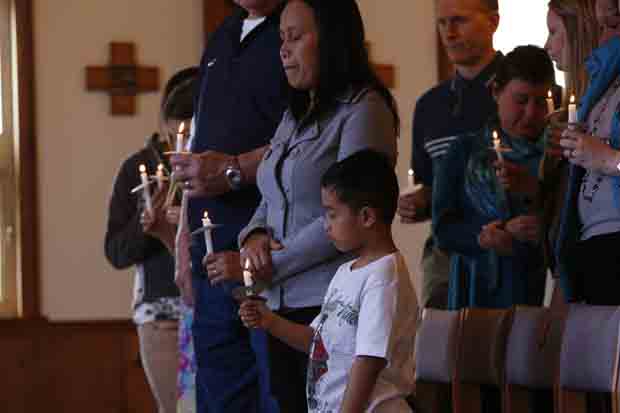 Families gather for Easter Mass at St. John by the Sea Church in Klawock on Prince of Wales Island in southeastern Alaska, April 19, 2014. (CNS photo/Nancy Wiechec)

This is the sixth story in a series on the American Parish.

WASHINGTON (CNS) — American parishes are not so monolithic anymore.

Traditionally European parishes, once the hallmark of the American Catholic Church, have become places where immigrants from Africa, Mexico, Central America and Asia have increasingly felt at home.

It’s an indication of the ever-changing face of the U.S. church.

While many parishes have gone through growing pains as new ways of doing things or ministries are adopted to help the newcomers feel at home, in the end parishioners largely have come to appreciate the diversity in worship, prayers and music.

The full spectrum of the Catholic community has become more evident with the migration of Christians from the Middle East. The profiles of once largely unknown Melkites and Maronites, among others, have become more prominent as they take their place in various neighborhoods and the workplace.

Dioceses, better recognizing a need to reach out to once marginalized Catholics, now encourage parishes to develop ministries to lesbian, gay, bisexual and transgender (LGBT) people and their families. While such ministries remain few, they have proven to be successful in helping people who long have felt abandoned by the church to feel welcomed and full participants in parish life.

The Church of the Sacred Heart in South Plainfield, New Jersey, has become one Catholic community known for its outreach to LGBT Catholics.

The LGBT outreach began with parishioner Bruce Zehnle’s suggestion. About eight years ago, Bishop Paul G. Bootkoski of Metuchen, New Jersey, opened the doors to the In God’s Image ministry and it then emerged at Sacred Heart.

Zehnle said that for him, “it’s very special the fact that Sacred Heart has a group like In God’s Image because most churches don’t even recognize gays and lesbians let alone has a group that meets.”

The parish’s Gay and Lesbian Faith Sharing Group, which includes heterosexual participants as well, meets monthly with about 15 to 20 people attending. Participants not only pray and study Scripture, but talk about difficulties in their lives as they try to live their faith.

David Harvie and Mark Nebus are regular participants. They credited Father John Alvarado, pastor, and St. Joseph Sister Kathleen Rooney, who is parish pastoral minister, for their willingness to welcome people who often are shunned in other faith communities.

Parishioner Nora Rodriguez said she joins the gatherings because she wants to demonstrate support for the LGBT community. She said members of her family are gay.

“I wanted to join in the end because of the folks that I love and how I was taught at a very young age that God is a loving God,” she said. “I grew up with that message and that there is no lesser person.”

A second community — those of Filipino descent — have found a home at Sacred Heart as well.

Numbering more than 100, the Filipinos have immersed themselves in parish life and have welcomed parishioners to events that celebrate the joys and traditions of their culture.

From special liturgies in the days before Christmas to an annual dinner and dance to raise funds for a shrine in the Philippines, the Filipino-American Association of Sacred Heart has given parishioners the chance to appreciate cultural differences while recognizing the faith they share.

Gilbert and Lilibeth Delacruz, born in the Philippines, have raised their family in South Plainfield. Their three children, 20, 18 and 10, remain active in church activities, either at Sacred Heart or in Newman Campus Ministry at college.

The Delacruzes are leaders in the association, which focuses on serving the church and the wider community through an expression of faith rooted in the Filipino culture.

“It’s important because as we grow and build our family, we want to continue to share our religious values, to continue those values molding our children as they grow up as Catholic. Because of that we have them involved in the church,” Gilbert said.

Father Alvarado has welcomed the association and said it is one of the many important ministries of the parish. Association activities are family focused and church centered.

“What I like about the parish is welcoming the diversity of people. I always hear Father John talking about we are a diverse society, but in heart we are Catholics. As a Filipino Catholic, I say we have the same upbringing,” Gilbert said.

Elsewhere, cultural activities are important to the life of Catholic communities.

At Our Lady of Redemption, a Melkite parish in the Detroit suburb of Warren, Michigan, active parishioners worry about the threat assimilation poses to their Eastern-rite heritage and their Arabic identity and traditions. More Melkites hail from Lebanon than elsewhere in the Middle East.

The drift away from their roots is already being felt, according to Lebanon-born Father Michael Cheble, pastor. “A lot of our parishioners, they don’t come, they go with Latin (rite churches), because it is closer. They put the kid in the (Roman Catholic) school, they get more and more inclined to go to the American church: ‘We already support the school,'” he said.

The phenomenon is not new. “When I was a child, everything here was totally Arabic. And my mother was the devout member. She came every Sunday,” said Sue Elek. “But I was more comfortable in the American church, because it was down the street, all the kids in the neighborhood were there, and so I would have to say I went there more than here when I was a young kid.”

In her teen years, though, she felt the draw to Melkite customs. When she married her Latin-rite husband John, it was in the Melkite rite. Over the years, Elek said, “John absorbed the Arabic culture. And he is affectionately known as ‘the White Arab.’ He’s more Arabic in many ways than I am. He speaks better Arabic than I do.” John also sings in the church choir at Our Lady of Redemption.

Still, there are downsides to having a cultural identity, whether chosen by you or for you. “I think I look like Arabic, but they think I’m Italian,” Elek said. Her Czech surname helps blur her identity to others. She added she hears prejudiced remarks “every once in a while. Once I went to the hospital and all of the doctors were (saying), ‘Arabs, why don’t they go back where they belong?’ But very rarely do I hear something like that. But my brothers are constantly singled out, like at the airport.”

“Oh, yep,” agreed Sara Raad, 20, an Our Lady of Redemption parishioner. “My brother got singled out the other day.”

“My sister-in-law,” added Elek, “who’s American and blonde, gets pulled over, because her name’s Habib. And I sail through because my name’s Elek.”

At St. Ann Parish, a 9,000-household parish in the Dallas suburb of Coppell, Texas, about 30 percent of registered parishioners are Hispanics, and the trends are shifting their way “Hispanics are growing here,” said Debbie Gonzales, parish family life director. “The baptisms in Spanish are up here compared to the baptisms in English. So it’s growing, it blows out of the water in Spanish, so that means when those children grow up and they go to religious education, religious education starts to look more Hispanic.”

St. Ann has seven weekend Masses at its 1,300-capacity church. All are pretty full, but some are more crowded than others. The 2 p.m. Spanish Mass — another Mass in Spanish is at 7 p.m. — is near overflowing, with latecomers watching the Mass on a closed-circuit feed, and 140 children being led out of the church early in the Mass for the children’s Liturgy of the Word — more by far than any other Mass. After the liturgy, a vendor in the church parking lot sells ice cream and other frozen sweet treats from a pushcart.

The drive of 10-15 minutes to go to a Mass in her native tongue is important to Marjorie Gomez of Lewisville, Texas, in the neighboring Diocese of Fort Worth. “In Lewisville, we used to have Mass in Spanish back in ’86, then the priest died, so the Mass in Spanish ended,” she said.

Msgr. Henry Petter, pastor, said he had been offered St. Ann’s pastorate a few times with the impending retirement of its predecessor, and each time he politely declined. But when his bishop invited him in for a face-to-face meeting, Msgr. Petter knew the assignment was in the work, so he said he insisted on having a full-time associate pastor who was a native Spanish speaker. While “Father Henry” speaks Spanish and can celebrate and preach in Spanish, he did not want to be solely responsible for the Spanish Masses. Under the current arrangement, he makes sure to celebrate each of the weekend Masses once a month.

Mark Pattison in Warren, Michigan, and Coppell, Texas, contributed to this report.