Parish views: From do-it-all pastors to 100 ministries to guide 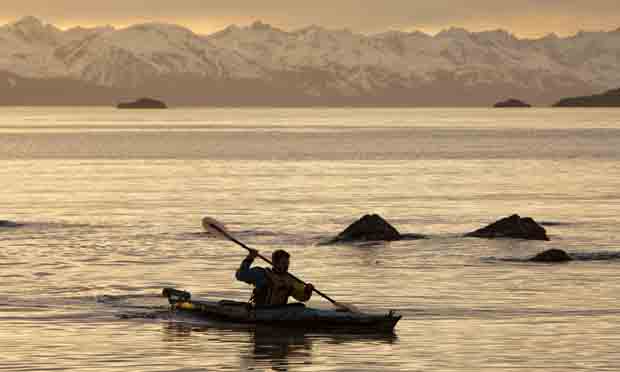 Father Thomas Weise kayaks off the shoreline of the Shrine of St. Therese in Juneau, Alaska, to visit parishioners. In terms of Catholic population, the Diocese of Juneau is small with 10,600 Catholics. Yet it covers an area of about 53,000 square miles. Priests often travel by sea plane, and sometimes even kayak, to get to more remote locations. (CNS photo/Nancy Wiechec)

This is the fourth story in a series on the American Parish. 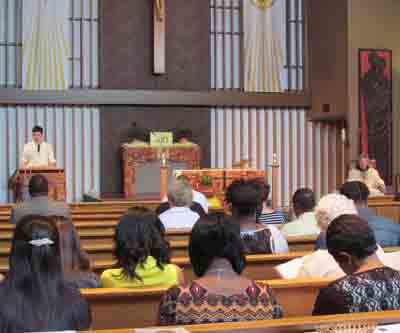 Franciscan Father Greg Plata and congregation listen to Scripture reading during Sunday Mass at St. Francis of Assisi Catholic Church in Greenwood, Mississippi, June 1, 2014. The church is one of two parishes and three missions for which Father Plata is responsible. (CNS photo/Patricia Zapor)

GREENWOOD, Miss. (CNS) — Franciscan Father Gregory Plata is the key to one example of how Catholic parishes are dealing with the decline in the number of priests.

He’s pastor of two small, geographically close, but vastly dissimilar parishes in Greenwood. Three missions and a struggling school also are his responsibility. Combined they serve 2,385 square miles of the Mississippi Delta, where Catholics have always been few and scattered.

As part of a look at how different types of parishes handle contemporary challenges, Catholic News Service reporters visited churches around the United States over the past few years. This package of stories, American Parish, presents a glance at some of the kinds of communities that Pope Francis might see if he had the time to visit a variety of parishes on his visit to the United States.

Workloads like Father Plata’s, with responsibilities for multiple parishes and missions, are one way U.S. dioceses have adapted to deal with a 35 percent decline in the number of priests since 1965. Elsewhere, parishes merge, lay administrators or deacons pick up much of the work or communities simply do without a priest in a daily, weekly or even monthly role.

To fill the gap, many retired priests, or those who have other day jobs, such as teaching, running charitable organizations or staffing diocesan offices, are “in residence” at parishes and help with ministerial functions as their schedules allow.

Until last summer when some Redemptorist missionaries came to do Hispanic outreach in the Greenwood area, it was just Father Plata and a retired priest covering the four weekend and five weekday Masses, and all pastoral needs for hospital and home visits and sacraments at two parishes and three missions scattered across Leflore County. Now one of the Redemptorists is assigned there. A half-time secretary rounds out the official staff at St Francis of Assisi Parish in Greenwood. 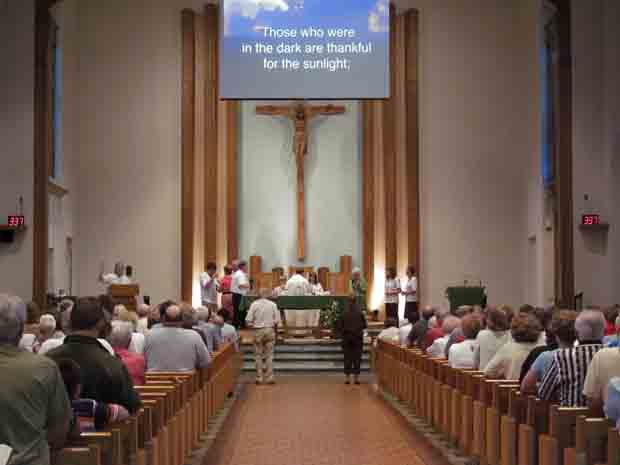 Saturday evening Mass is celebrated at the Waldo worship site of St. Francis of Assisi Parish in Manitowoc, Wisconsin, June 23, 2012. The worship site is one of three former parish churches now used by the single city-wide St. Francis. Prayers and song lyrics are projected on the screen. (CNS photo/Patricia Zapor)

Three miles across town at Immaculate Heart of Mary, the older of the two churches in Greenwood where Father Plata also is pastor, a paid staff of three manages day-to-day functions. That includes a joint religious education program for both parishes. About 300 families are in Immaculate Heart Parish and 200 at St. Francis.

Volunteers in the two parishes and the missions make nearly everything else possible.

For instance, at one of the missions, Sacred Heart in Winona, about 25 miles east of Greenwood, members host Communion services when a priest cannot get there. They also run the religious education programs and any other functions.

“We operate as a parish,” said Agnes Parker, albeit without a priest on hand most of the time.

In fact, said another Sacred Heart member, Margaret Harris, compared to the days when a priest staffed the church and led most everything, “we’re more organized than ever” as a laity-managed operation. When a priest is available, Sacred Heart members said, about 30 to 40 people attend Mass. As for other activities, the members run weekly Bible study, visit a nursing home and prison, sponsor annual luncheons for Easter and co-sponsor a Lenten lunch with Winona’s Methodist church.

At St. Francis School, thin resources mean the teachers are mostly retired public school employees, who can only afford to work there because they have pensions to supplement their low pay, acknowledged the principal, Franciscan Sister Mary Ann Tupy.

As when the Franciscans opened the St. Francis Mission — first a school and then the church — as an outreach to impoverished African-Americans at the height of civil rights tensions, the order’s missionary commitment continues. Besides Father Plata and Sister Mary Ann, Franciscan Brother Craig Wilking, development director, finds the school grants and other forms of financial support. A retired military chaplain, Franciscan Father Adam Szufel, is in residence at St. Francis, celebrating Mass and helping ensure the mission churches get regular visits from a priest.

In the past year, the Redemptorists established a presence in the county, primarily to serve the growing population of Hispanic immigrants. One has been living at St. Francis and joining Father Plata and Father Szufel in pastoral services.

The ongoing commitment of the Franciscans to Greenwood was further stretched a few years ago, when Father Plata was asked to also serve as pastor of Immaculate Heart of Mary because of a shortage of priests in the Diocese of Jackson.

The two parishes traditionally have been home to distinct communities. Although the days have passed when blacks were pointedly told they were unwelcome at Immaculate Heart, few African-Americans worship there regularly.

On the other hand, the formerly all-black congregation of St. Francis includes a handful of white regulars, who either find the Mass schedule suits them better or, as several said, they appreciate the more multicultural community and lively liturgies. St. Francis’ growth in the last decade has come largely from Hispanics, leading Father Plata to schedule a weekly Spanish Mass, which is generally better attended than the English one.

Marc Biggers, a lifelong Immaculate Heart parishioner, said that since his childhood the black and white communities of Greenwood have come a long way toward being comfortable with each other.

“The last 10 to 15 years we’ve really mingled a lot better,” he said. Sharing a pastor has helped. “At first the transition to having a Franciscan was kind of awkward,” he said. “But I think it’s working.”

Katherine Fisher a parishioner at St. Francis, said she does not go to Immaculate Heart for Mass primarily because she has so many obligations at St. Francis. But she and other African-Americans expressed some lingering discomfort with their Catholic counterparts across town, largely dating to the racial tensions of decades ago.

A cracked blue window pane above the front door at St. Francis has intentionally been left unrepaired since someone shot a gun at the church in the 1960s, a pointed reminder of the struggles faced by the Franciscans and the parishioners. Memories of those times are hard for some people to leave behind, said several parishioners.

Georgette Griffin said “we’re always talking about bridging the gap, but I don’t see people putting forth the effort.”

Father Plata described the sentiments within the two parishes toward each other as “not exactly a division, but more that people are more comfortable in their own cultures.”

Immaculate Heart parishioner Dave Becker is among those who recognized that while the two churches have quite different cultures, they will need more and more consolidation if the Catholic presence in Greenwood is to survive.

About 450 miles to the west of Greenwood and 180 degrees around the spectrum of parish size, Father Henry Petter is pastor of St. Ann Church in Coppell, Texas, where he’s assisted by two parochial vicars, three permanent deacons and a paid staff of about 60 full-time and 30 to 40 part-time workers. Their Catholic megachurch is home to 30,000 people. It has no school, but the religious education program serves 2,500 young people. A recent volunteer dinner was attended by 560 people.

It’s a big, complicated place to operate, Father Petter told CNS. But the size ensures that 30,000 people in the fast-growing Dallas suburbs have a vibrant parish with 100 different ministries. That likely would not be the case if instead the diocese had built three or four more traditionally sized churches which may not have been able to count on even one priest to staff them.

Father Petter said a parish of St. Ann’s size works because there are good directors of ministries.

“It’s a big operation,” he said, adding that he “can’t keep on top of all of them. I meet with my directors regularly … and once a month we have an all-staff meeting, at least for full-time staff.”

Protestants, especially in high-growth areas of Texas, are accustomed to megachurches, but Father Petter said the model can work well for Catholic parishes as well, if done right. It takes strong finances — St. Ann’s budget last year was about $7 million — in addition to lots of paid staff and volunteers.

“Everything about our parish, there’s nothing small about it,” Father Petter said.

“You can get lost in a megachurch,” he acknowledged. “The reality is you have a lot of people who just go to church on Sunday and go back home. The challenge is to get as many people engaged as you can.

The most apparently traditional of the parishes visited by CNS is Church of the Sacred Heart in South Plainfield, New Jersey. At least it looks that way from the outside. There, Father John Alvarado ministers not far from where he was born and raised.

Father Alvarado has part-time clerical help from a priest-in-residence, as well as two permanent deacons and Sister Kathleen Rooney, a Sister of St Joseph is pastoral associate.

Sister Kathleen’s responsibilities include coordinating the schedules for baptism, meeting couples preparing for marriage, and organizing the RCIA program. The deacons generally do family ministry, visit hospitalized parishioners and those who are homebound, and do some counseling including marriage preparation. At Sacred Heart, nearly half the weddings have a deacon, not a priest, as presider.

In the Diocese of Metuchen, which includes South Plainfield, permanent deacons outnumber priests.

Father Alvarado said the deacons and the parish staff ensure that his workload doesn’t feel overwhelming. He encouraged Deacons Greg Caruso and Wayne Otlowski to do more than function as “glorified altar server,” they said.

Mark Pattison in Coppell and Dennis Sadowski in South Plainfield contributed to this story. 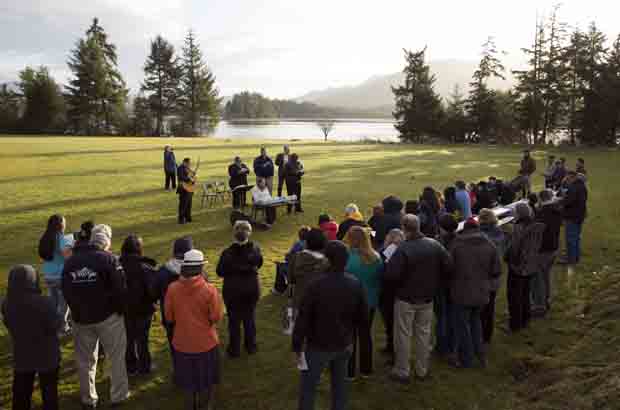 Father Jean Paulin Lockulu and a few parishioners from St. John by the Sea Church join an ecumenical Easter sunrise service in Klawock on Prince of Wales Island in southeastern Alaska, April 19, 2014. They took part in the service before celebrating Easter Mass at their parish of St. John by the Sea. (CNS photo/Nancy Wiechec)

PREVIOUS: Although of many styles, Catholic schools face similar challenges