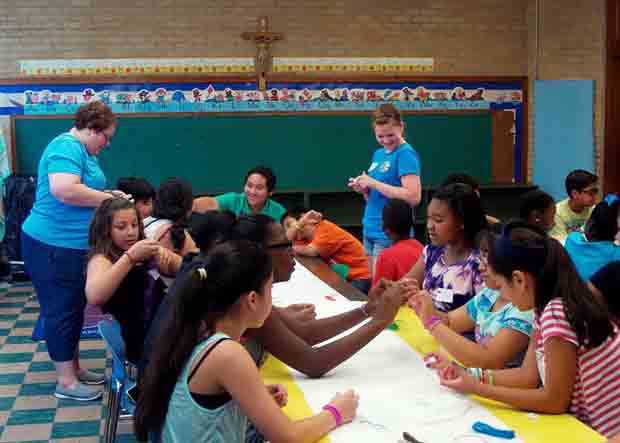 This is the fifth story in a series on the American Parish.

WASHINGTON (CNS) — Just as one Catholic school does not reflect all of them, there isn’t one religious education program Pope Francis could visit while he is in the United States that would represent the variety of faith formation programs in churches across the country.

Programs vary according to parish size and styles of ministry. And although they run the gamut from structured weekly classes in school settings to informal discussions with pastors and children before or after Mass on Sundays, the programs face the similar challenge of how to keep children and their parents involved in the process.

In 2014, 2.7 million elementary school students and 631,943 high school students participated in religious education programs, according to Georgetown University’s Center for Applied Research in the Apostolate.

As Father Edmund J. Penisten, pastor of St. John by the Sea in Klawock, Alaska, put it: In a parish as small as his, the pastor has to be the director of religious education. “There’s just no other way.”

The priest said half the men in the parish work in the fishing industry and are often away from home in late spring and summer so the parish only has about 40 people attending Sunday Masses during that time. Eight children are signed up to attend religious education classes before Mass this year.

For those children, Catholic school is not an option. There is only one Catholic school in the Juneau Diocese, located in Ketchikan, a three-hour ferry ride from Prince of Wales Island, where Klawock is located.

Juneau Bishop Edward J. Burns said the diocese has conducted adult religious education in online settings. He believes that might be the future for Catholic education in his diocese, and that diocesan staff are exploring if such a program might work for elementary education.

Father John Alvarado, pastor at Church of the Sacred Heart in South Plainfield, New Jersey, has seen a decline in the number of students enrolled in the religious education program recently. He attributes that to shifting demographics.

But he also expressed frustration that “we have all these kids go through our program and we don’t see them in church. I suppose that’s everywhere;but it drives me nuts.”

Father Alvarado, who is likely not alone with that frustration, spoke of another challenge that is likely not an isolated one: parents dropping their children off at religious education classes but not taking part in anything else at church.

Parental involvement in Catholic schools and religious education is a challenge across the board, especially with so many things tugging at parents’ time.

Immaculate Heart of Mary Parish in Greenwood, Mississippi, tries to address that problem by providing a family-style supper prior to religious education classes one night a week. Donations pay for the meals and parishioners are encouraged to get involved by preparing the meals. But just to offer the classes requires recruiting volunteers, of course.

The next big challenge is to keep young people involved, especially after they’ve received the sacraments.

Mike Leminger, middle school youth minister at St. Ann Parish in Coppell, Texas, knows all about that, describing it as a “carrot/stick approach to confirmation.”

He warns against “using your sacraments as a check mark” and says he always tells the parish’s eighth graders: “Once you receive confirmation it’s not like it’s graduation and you never set your foot back in the school.”

Instead, he tells them: “You’re fully initiated. You’re fully Catholic, now let’s jump in and embrace it.”

Leminger has been at this work for more than 10 years, in a parish that does religious education in a big way. St. Ann’s is often described as a megachurch since it has more than 30,000 registered parishioners. It doesn’t have a school, but it more than makes up for that with a religious education program that serves 2,500 students each week. Of those, 850 are in English classes and 500 in Spanish classes — and that’s just grades one-five. Middle school and high school programs account for the rest.

Kurt Klement, director of St. Ann’s high school and young adult ministry, is confident that what has worked at his parish can be replicated anywhere if a parish is committed to “making disciples,” not forming a social club or just being busy.

To that end, he says parishes need to have good youth leaders and attractive events that engage young people. Leminger said they also need to tap into what makes a Catholic parish different from “the appeal that some the nondenominational super-churches may have.”

“We have Jesus in the Eucharist. We have the sacraments. We have the liturgy, the Mass,” he reminds parish leaders who have asked about what works in attracting young people to church.

His co-worker, Klement, also acknowledges that with any religious education program, time is limited.

“On one hand, we do believe we can help provide experiences that can be life-changing for young people and we can create a community where young people are loved and accepted, that can make all the difference in the world for them. But we recognize that we see most of these youth for an hour and a half a week,” he said.

Parental involvement is key, he added.

Contributing to this story were Mark Pattison in Coppell, Nancy Wiechec in Klawock, Patricia Zapor in Greenwood and Dennis Sadowski in South Plainfield.

PREVIOUS: Parish views: From do-it-all pastors to 100 ministries to guide

NEXT: Portland Archdiocese to stay in conversation with school on job offers