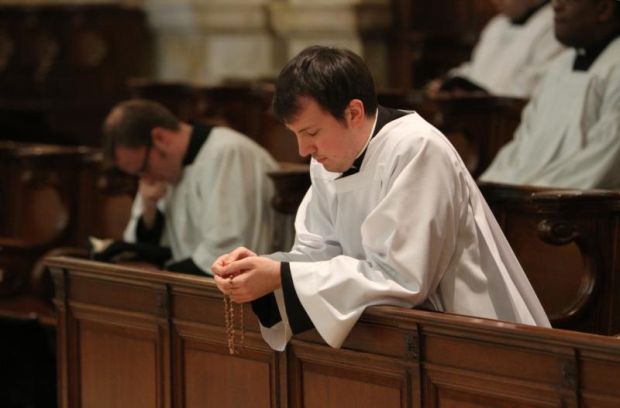 A seminarian prays the rosary in 2014 at St. Joseph's Seminary in Yonkers, N.Y. Seminarians at St. Joseph's come from 22 countries and represent the universality of the church, according to Msgr. Peter I. Vaccari, rector of St. Joseph's. The seminary choir will sing for Pope Francis' Mass at Madison Square Garden in September. (CNS photo/Gregory A. Shemitz)

“Appropriate attention is given to men on what it means to be formed as a priest, but men’s formation cannot take place in isolation,” he said.

Msgr. Vaccari has been the rector of St. Joseph’s Seminary in Yonkers since 2012. The seminary is the centerpiece of a young inter-diocesan partnership among the Archdiocese of New York and the dioceses of Brooklyn and Rockville Centre.

The seminarians come from 22 countries and represent the universality of the church, according to Msgr. Vaccari. They also reflect the long history of immigration in the church in New York.

“Our immigrant character remains, but the faces change,” said the priest, who also served for three years as the rector of Immaculate Conception Seminary in Huntington.

He told Catholic News Service one of the benefits of the inter-diocesan partnership is that “the seminarians have a greater sense of their ordination into a presbyterate that will serve the metropolitan area.”

They share some of their theology classes with deacons and lay and religious candidates for master’s degrees in theology, pastoral studies or Catholic philosophical studies.

Msgr. Vaccari said the side-by-side study gives seminarians the opportunity to learn with people they may ultimately work with or serve in parishes. In addition, studying with men from neighboring dioceses enables seminarians to examine common pastoral questions in the same context, he said.

The leaders of the three dioceses signed an agreement in 2011 to create the St. Charles Borromeo Inter-Diocesan Partnership in Spiritual and Theological Formation for Clergy, Religious and Laity.

The formation program now includes more than 105 seminarians from the three founding dioceses; the Diocese of Bridgeport, Connecticut; the Syro-Malankara Catholic Exarchate; and three religious congregations: the Franciscan Friars of the Renewal, the Piarists and the Idente Missionaries.

The Diocese of Albany will send its seminarians to the program in the upcoming academic year. St. Joseph’s also hosts men who will be ordained for dioceses in other countries.

By January 2016, candidates for the permanent diaconate from New York, Brooklyn, Rockville Centre and Bridgeport will share formation programs through St. Joseph’s. The classes are held at four campuses in the three partnership dioceses.

There is strength in numbers. Msgr. Vaccari said the partnership reflected a commitment to do what is best for formation, for faculty and for the finances of the participating dioceses. There are more full-time faculty members and fewer adjuncts than in the pre-partnership arrangement. In addition, the program uses video link technology to allow faculty to teach students simultaneously in two locations.

“The heart of St. Joseph’s is priestly formation. Without the heart, the bishops would close the door and it would be over,” Msgr. Vaccari said.

Priestly formation integrates the human, spiritual, intellectual and pastoral dimensions described by St. John Paul II in his exhortation “Pastores Dabo Vobis” (“I Will Give You Shepherds”) and mandated by the Catholic bishops of the United States in the Program of Priestly Formation, according to Msgr. Vaccari.

“The goal of the church, the seminary and the faculty is pretty clear. There’s a desire to be involved in the formation of men who will become happy, healthy, holy priests,” Msgr. Vaccari said.

Today’s seminarians are “living in a society that is broken,” he said. Some of the men looking to serve are coming from broken families and “a lot of healing has to go on.” Nonetheless, he said, “the seminary is not a therapeutic community.”

Father Thomas Berg, director of admissions at the seminary, said there is more attention paid now than in the past to issues of human formation, both in the admissions process and throughout the seminary studies.

“The process is much more thorough, and has intensified. It includes psychological assessment, interviews with the admissions board, review of transcripts and assessing vocational stability and readiness to take this journey,” he said.

“There is a greater sense of the need to begin the process of accompaniment from day one,” Father Berg said.

This is most evident in the interaction with faculty advisers, according to Father William Cleary, director of the department of biblical theology, who graduated from St. Joseph’s and was ordained in 2004.

When he was a student, seminarians met their advisers once a year, he said. Now, the meetings take place almost once a month and include conversations guided by the needs of the student and the input of faculty beyond the advisers.

Father Cleary said, “The structure of advisement is much more regimented, in a good way, so we get to know the man better.” There is more communication on a broader range of subjects, including areas of potential improvement, he said.

Msgr. Vaccari said the open communication and ongoing formation help administrators determine whether ordination of a candidate is in the best interest of the church. “That’s our first priority. Years of formation become years of relationship with Jesus, facilitated by self-knowledge and relationship-building with him.”

Father Cleary said there is an effort to make training more practical by, for example, relying less on dry commentaries and more on scripture, saints and early Christian writers in preparing homilies.

Msgr. Vaccari said third-year students visit the Holy Land, which informs their study of Scripture and preaching, and helps them understand the impact of contemporary issues in the church.

One of the benefits of the inter-diocesan partnership is a renewed emphasis on teaching liturgical music.

“By the time they leave here, they are competent to sing the Mass and work with musicians in the parish,” she said.

“Their singing forms the basis for the congregational singing. They’re not musical spectators,” Donelson said. “It’s important for the men to understand sacred music on a very practical level. What’s going on at Mass is sacred and holy and the beauty of sacred music touches hearts in a way explanation can’t.”

Donelson said there’s no magic trick to teaching people to sing on key. “If you expose men to how to listen, they can learn to do it,” she smiled.

The seminary choir will sing for Pope Francis’ Mass at Madison Square Garden in September.

All students get help with writing in their first year and those for whom English is a second language can access remedial support. Father Berg said the help includes mentoring, tutoring and accent-reduction.

On the cusp of its fourth academic year, the partnership was re-accredited by two agencies, Middle States Commission on Higher Education and the Association of Theological Schools.

Father Berg said 10 to 12 priests now live at the seminary and provide a renewed sense of cohesiveness, as well as an example to the seminarians. “We like each other and have a wonderful rapport,” he said.

He said the merger created a momentum that has slightly increased the number of seminary candidates. “You can make the case that what we’ve done here is working. The bishops were paying attention. Now that we’re together, others are taking note,” Father Berg said.

PREVIOUS: Charitable works inspired by pope’s call to serve people on the margins