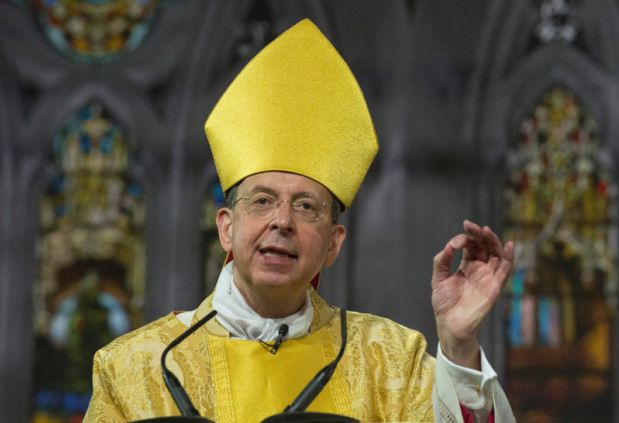 Baltimore Archbishop William E. Lori delivers the homily during the Aug. 6 closing Mass at the Knights of Columbus annual convention in Philadelphia. Approximately 2,000 knights from around the country and abroad gathered at the Pennsylvania Convention Center for the Catholic fraternal organization's 133rd Supreme Convention. (CNS photo/Knights of Columbus)

PHILADELPHIA (CNS) — St. John Paul II often referred “to the witness of holy men and women as ‘transfigured lives capable of amazing the world,'” Baltimore Archbishop William E. Lori told members of the Knights of Columbus in a homily Aug. 6.

Father Michael J. McGivney, the founder of the Knights, is an example of just such a holy man, he said.

Archbishop Lori made the comments in a homily at a Mass on the feast of the Transfiguration, the last day of the Knights of Columbus Supreme Convention in Philadelphia.

It was the annual memorial Mass for deceased members of the Knights.

“Father McGivney’s charity as a parish priest,” Archbishop Lori said, “revealed a soul that had been transfigured, changed, transformed by the Holy Spirit into the living image of God’s glory, that is to say, his love. How many lives has Father McGivney’s ministry changed and transformed?”

The day’s Gospel account of the Transfiguration describes how Jesus “revealed his glory before the awestruck apostles Peter, James and John” on Mount Tabor, he said.

It is “presented as the high point of Jesus’ ministry, for here, on the heights of Tabor, Jesus not only reveals in human flesh the divine glory that is his for all eternity but he also reveals how we are to be transformed so as to share the glory of God,” Archbishop Lori said.

“You might say that when we climb Mount Tabor with Peter, James and John, our eyes of faith behold the divine origin of that charity and unity which are at the heart of our beloved order, the Knights of Columbus,” said Archbishop Lori, who is supreme chaplain for the Knights.

Father McGivney did not “just invent these principles” that are the foundation of the fraternal organization, he said, “but he drew them from the very heart of the Gospels he knew and loved so well.”

“He knew that if we were to share the glory of God,” Archbishop Lori continued, “we must be people who are united in charity: united in opening our hearts to the love of God poured forth by the Holy Spirit;united in bearing witness to the love of God we have received by leading lives of unhesitating charity, especially on behalf of the poor, the sick and the vulnerable.”

Approximately 2,000 members of the Knights of Columbus from around the country and abroad gathered at the Pennsylvania Convention Center in Philadelphia for the Catholic fraternal organization’s 133rd Supreme Convention.

The theme for the Aug. 4-6- convention was “Endowed by Their Creator with Life and Liberty,” paraphrasing the famous words penned by Thomas Jefferson in the same city 239 years ago.

In the business portion of the convention, the Knights passed several resolutions including one on traditional marriage.

“We will remain steadfast in our efforts to promote the church’s understanding of marriage as the faithful, exclusive and lifelong union of one man and one woman joined in an intimate partnership of life and love,” it stated.

“We pray that the Holy Spirit enlighten elected officials to adopt laws, and judges to make judicial decisions that affirm the family and the authentic nature of marriage,” it said.

The Knights said they would work to push for the protection of traditional marriage at all levels of government.

They also expressed their continued solidarity and ongoing humanitarian assistance to Christians and other religious minorities being persecuted in the Middle East.

On the opening day of the convention, Supreme Knight Carl Anderson and two archbishops from the Middle East, from Syria and Iraq specifically, discussed the ongoing strife in the region. Anderson said the Knights remained committed to raising more money for the organization’s Christian Refugee Relief Fund.

In other resolutions, the Knights also called on Catholic to push the Obama administration to rescind the federal contraceptive mandate requiring most religious employers to provide employees with coverage of contraceptives, other birth control measures and abortafacients even if they are morally opposed to doing so.

They called the mandate “a clear and direct violation of our religious liberty rights.”

In a resolution on supporting “a culture of life,” they said: “We will continue to speak out to our elected representatives about the need to enact legislation protecting human life in all its stages and to oppose abortion, embryonic stem-cell research, human cloning, euthanasia, assisted suicide, or other offenses against life.”

The Knights called for laws “that recognize and protect in law the right of conscience” for doctors, nurses, pharmacists and other medical personnel as well as for Catholic hospitals.

They also reiterated their long-standing support for church teaching on the death penalty.

A resolution welcoming Pope Francis to the U.S. in September urged all Knights to express “solidarity with the Holy Father through a commitment to prayer, fasting and acts of charity for the intention that God may protect him during his visit to the United States and grant him the courage and wisdom to guide the church at this time.”

It added: “The Knights of Columbus offers its deep appreciation to Pope Francis for his witness and for his encyclical ‘Laudato Si” which reminds us that the protection of God’s creation is inextricably linked to healthy family life.”

NEXT: Women are further victimized by harvesting of fetal parts, says counselor