Abducted girls remembered, but not with urgency, in Nigeria 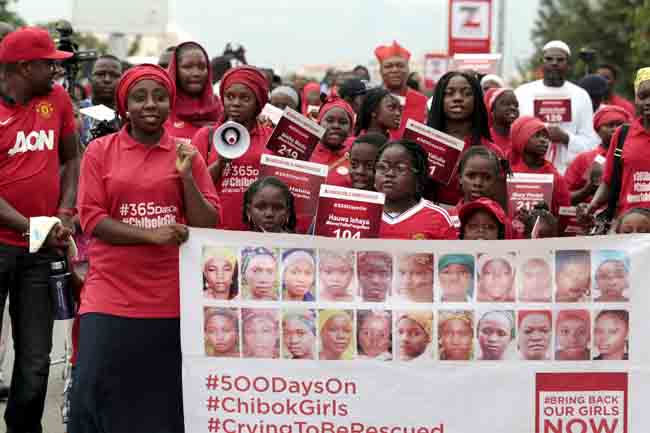 #BringBackOurGirls campaigners take part in a protest in Abuja, Nigeria, Aug. 27, to mark the 500th day that more than 200 girls of the Government Secondary School were abducted by Boko Haram in their dormitory in Chibok, Nigeria. (CNS photo/Afolabi Sotunde, Reuters) 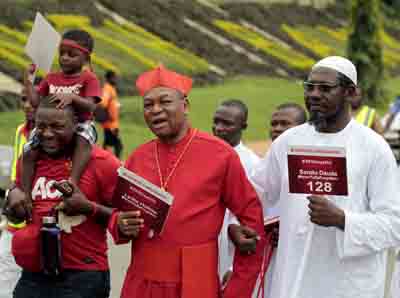 ABUJA, Nigeria (CNS) — Cardinal John Olorunfemi Onaiyekan of Abuja and Sheik Nura Khalid, chief imam of Apo Legislators Quarters Jumu’at Mosque, joined the members of the #BringBackOurGirls movement Aug. 27 to mark the 500 days that more than 200 girls of the Government Secondary School, Chibok, who were abducted by Boko Haram in their dormitory in Borno state April 14, 2014.

Speaking during the commemoration, Cardinal Onaiyekan expressed sadness that the students were still in the hands of their captors.

“The Joint Task Force kept telling us that it had combed the Sambisa Forest where the abductors alleged to have kept the children, but we have not got an inkling regarding their whereabouts,” he said.

He expressed hope that the 500 days would be a symbolic catalyst to move the Nigerian community into recognizing the serious problem on its hands and finding a solution.

“I have always identified with this group. That is the reason I came this day; we are commemorating the 500 days they, Chibok girls, were abducted. This is a serious matter. Our girls taken from us,” the cardinal said.

Cardinal Onaiyekan called on Nigerians to understand the magnitude of the issue of the abduction and pray for the students’ safe return.

“I thought that this whole place would be congested, but I was terribly disappointed. This whole thing doesn’t seem to hit the hearts of Nigerians unless we are lucky that the media carries it tonight and amplifies it, so the country hears that something happened here today.”

He said he had not planned on going to the commemorations but had received a call from Vatican Radio asking him about it. He said he told Vatican Radio he hoped 500 days would “be a symbolic catalyst to move the Nigerian community into recognizing we have a serious problem. My heart bleeds for the young ladies, the fact that they called me from Rome means that they have not forgotten, it is we that have forgotten.”

Sheik Khalid said his presence at the commemoration was to tell the world that the Muslims faithful were always ready to unite with their Christian brothers and sisters to fight for the soul of the country.

“I want to challenge all the imams that we should use our purpose to fight for the freedom of the Chibok girls. We must tell the world that Boko Haram will never succeed and they are not winning and Nigeria will win this battle, we are peace lovers, we are peace workers and we shall die as peace workers,” he said.