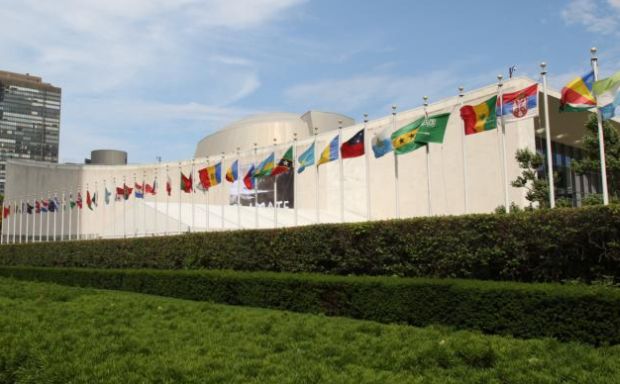 Flags of some of the 193 full member-countries of the United Nations are seen outside the U.N. General Assembly building in New York City June 30. (CNS photo/Gregory A. Shemitz)

VATICAN CITY (CNS) — In the month before Pope Francis was scheduled to visit the U.N. headquarters, a little flap unfurled regarding the flying of flags.

The Vatican said seeing the flags of the Holy See and Palestine flying with the banners of the 193 full member-countries of the United Nations is not its desire.

The Palestinian observer mission at the United Nations formally asked that its flag and the flag of the only other U.N. permanent observer — the Holy See — be flown at the U.N. headquarters and at U.N. offices.

Pope Francis is scheduled to visit the headquarters Sept. 25 and address the General Assembly.

Late Aug. 28, the Vatican press office issued a statement saying that U.N. rules prevent member and observer states from objecting to the introduction of resolutions, so it does not object to the Palestinian proposal.

“The Holy See, however, notes the long established praxis and tradition of the U.N., since 1945, whereby only flags of member states are displayed at the U.N. headquarters and offices, and will accept whatever decision that the U.N. may wish to take in this regard in the future,” the statement said.

PREVIOUS: Abducted girls remembered, but not with urgency, in Nigeria