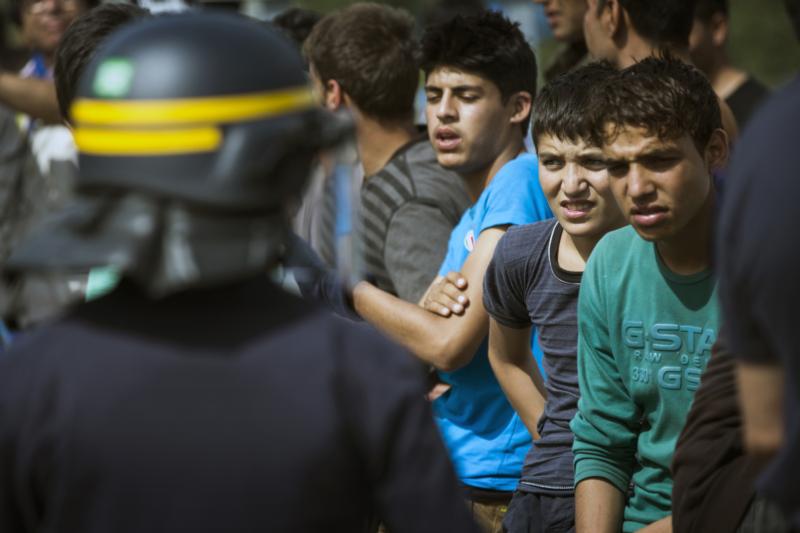 French police face migrants next to the "Jungle" migrant camp and try to prevent them from jumping on trucks near Calais, France, Aug. 5. (CNS photo/Etienne Laurent, EPA)

OXFORD, England (CNS) — French and British Catholic bishops urged their governments to settle a growing refugee crisis around the port of Calais, where highways have been blocked and migrants from Africa and the Middle East have died attempting illegal crossings of the Channel Tunnel, or Chunnel.

“These men and women crowded together in no man’s land around the city of Calais, waiting to cross secretly to England, are not murderers or terrorists. They’re often young and have risked everything for months to find a better life far from the conflicts and persecutions of their home-countries,” said Bishop Marc Stenger of Troyes, head of France’s Catholic Pax Christi movement.

“When an undersea tunnel linking two countries — an astonishing technological feat — becomes a place of tension, violence and death, it’s time for us to wake up,” he said in an Aug. 3 statement as the French and British governments announced steps to tighten security around the Chunnel and keep migrants away.

Bishop Stenger said the crisis highlighted a “lack of coherence” in Europe’s migration policies and labor laws, which could not be “tackled solely with technical adjustments” or by treating migrants as “numbers in statistical columns.”

Across the English Channel, the British bishop in charge of migrant issues also urged his government to recognize “the desperation of those seeking asylum” and provide more efficient procedures for handling their claims.

“The causes of this mass migration are complex — armed conflict, civil war, the rise of (Islamic State), the failure of some states to function adequately, social deprivation and poverty,” wrote Auxiliary Bishop Patrick Lynch of Southwark, who heads the Office for Migration Policy of the English and Welsh bishops’ conference.

In an Aug. 4 letter to Britain’s Daily Telegraph, he wrote: “All these factors deepen desperation. Churches and faith communities in some of these countries are uniquely placed to offer care to those fleeing conflict, but also to help people, especially the vulnerable, to see through the human traffickers’ false promises.”

At least 5,000 migrants, many from Eritrea, Syria and Sudan, have been stranded in makeshift camps and shanty towns outside Calais, after traveling across Europe to reach Britain.

At least 10 have died since June as they jumped aboard trains and trucks entering the 32-mile tunnel, which opened in 1994 to the port of Dover, England. French police said 1,700 had attempted the crossing on the night of Aug. 2; 700 were intercepted inside the freight terminal.

Bishop Lynch urged the British government to “work closely with humanitarian agencies and faith communities in the migrants’ countries of origins” and said he welcomed a joint Aug. 2 pledge by the British and French interior ministers to “provide protection for those genuinely fleeing from conflict and to pursue the callous criminals who encourage so many to make this perilous journey.”

“We must respond to the situation in Calais by recognizing the desperation of those seeking asylum,” he added.

NEXT: In Japan, U.S. bishop says USCCB will push for nuclear disarmament