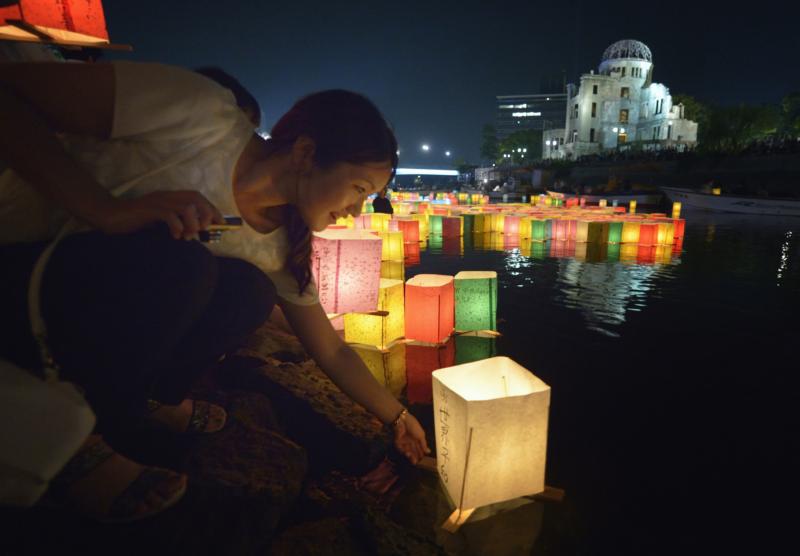 A woman sets a floating candle lantern on the river Aug. 6 in Hiroshima, Japan. The lanterns, thousands of which were launched on the 70th anniversary of the atomic bombing of the city, bear handmade messages and drawings, conveying each person's prayers for peace and comfort for the victims of the violence. In the background are the ruins of a building damaged by the bomb and now converted into a peace memorial. (CNS photo/Paul Jeffrey)

HIROSHIMA, Japan (CNS) — For a long minute on a sunny morning, silence fell over the memorial park that commemorates the Aug. 6, 1945, atomic bombing of the city.

A gong sounded repeatedly as local residents and visitors from around the world stopped to remember a similarly sunny morning 70 years ago when a fireball ripped apart the skies.

Among the visitors to Hiroshima was Bishop Oscar Cantu of Las Cruces, New Mexico. It was the bishop’s first visit to Japan, and he said he was moved by what he saw and heard from Japanese Catholics, who have been adamant in demanding an end to nuclear weapons.

“It’s important for an American delegation to be here with the Japanese in this moment, because we celebrate the efforts they have made for peace, and we stand in solidarity with them. They are part of a church that around the world has spoken against the proliferation of nuclear weapons, a message that here is directed particularly at the United States,” Bishop Cantu told Catholic News Service.

“So although our countries were enemies 70 years ago, we have become allies in this effort. We do, however, recognize that there’s movement in Japan toward building up their military capabilities again. We caution against that, and we stand with the bishops of Japan in opposing that,” he said.

Bishop Cantu, who serves as chairman of the U.S. bishops’ Committee on International Justice and Peace, said that as a U.S. citizen, he arrived in Hiroshima with a sense of “sorrow and repentance.”

He also was to travel to Nagasaki, the second Japanese city on which the U.S. dropped an atomic bomb, for similar ceremonies Aug. 9.

“The Japanese bishops have much to teach us. I was heartened to read their statement from earlier this year in which, on behalf of all Japanese, they repented for the harm they did to people of the region (in the wars). That attitude allows us to start moving forward,” he said.

Following a Mass that marked the bombing’s anniversary at the Catholic Memorial Cathedral for World Peace, Bishop Cantu spoke to the congregation about the work that U.S. bishops are doing to ensure that the world will experience no more Hiroshimas.

The bishop said that since the end of the Cold War in 1991, Americans think little about nuclear weapons and the threat they pose. The recent agreement negotiated by the several countries with Iran “puts nuclear weapons in the forefront of political debate after years of being an afterthought in the minds of most Americans,” he said.

For many of his generation, Bishop Cantu said, “the return to a serious discussion of nuclear disarmament may seem like an outdated exercise. Sadly, it is not.”

He cited the nuclear threats of Russia over Ukraine and Russia’s announcement in June that it is boosting its nuclear arsenal by putting 40 new intercontinental ballistic missiles into service. He said those developments have lent fuel to hawks in the U.S. Congress, who in turn want to modernize the U.S. arsenal, replacing old weapons systems they claim are obsolete. Such an attitude likely reflects changing public opinion in the U.S., he said, noting that opinion polls show declining support for reducing nuclear arsenals.

That means the U.S. bishops, who have for decades argued for reducing and eliminating nuclear weapons, have major work ahead, he said.

“The task of the U.S. bishops is to convince the majority of Americans … that they need to support the vision of a world without nuclear weapons. They need to believe that such a goal is possible,” he said.

But the bishops cannot go it alone and have often partnered with others with similar interests in peace, he explained.

“Happily, our partners in nuclear non-proliferation and disarmament are not confined to just the religious community in the United States. There are scientists, politicians, business and military leaders, academics, and civil society activists who have joined this effort,” he said.

Yet the bishop warned that the struggle against nuclear weapons in the U.S. has encountered difficulties of late in Washington’s hot political climate. Given what he called the “increased political polarization within our Congress,” all signs indicate the road to authentic disarmament will be long and difficult, but Bishop Cantu pledged that the U.S. bishops will continue “to fight the good fight to eliminate nuclear weapons.”

NEXT: Pope talks to youths about discernment, grandparents, Eucharist