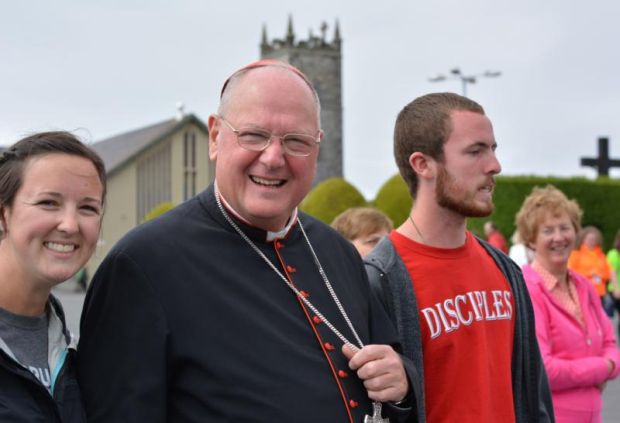 The United States is “a nation of immigrants and we are proud of that,” New York Cardinal Timothy M. Dolan told Catholic News Service at the Marian shrine of Knock, where he delivered a keynote opening a novena.

“If there is one thing we have done well, it is to welcome the immigrant. Every person in the United States, unless you are Native American, is a descendant of an immigrant,” he told CNS.

Recalling that his own great-great-grandfather came to America from Ireland, he commented, “We didn’t have this intense anti-immigrant sentiment back then; America was known as a land of welcome, and there weren’t these restrictions.”

Discussing Pope Francis’ September visit to the United States, he said the pope was particularly concerned about the treatment of immigrants and had suggested that America “might be a light to the rest of the world, showing it how to welcome and embrace and assimilate the immigrant.”

Cardinal Dolan said Pope Francis expressed a desire to see the work of American Catholic charities helping immigrants because New York is synonymous with the Statue of Liberty. He also wanted to see an inner city Catholic school, so he is scheduled to visit Our Lady Queen of Angels in Harlem, and there he will also meet about 150 immigrants and some of the charities working with them. He is also scheduled to meet with immigrants in Philadelphia.

Cardinal Dolan told CNS that during his week in Ireland, more than 160 Americans had visited ancient places of pilgrimage, and many of the people they met expressed gratitude to the U.S. bishops and Catholic leaders for their “call for sound and fair immigration reform” in the United States.

Separately, Cardinal Sean P. O’Malley of Boston led 1,500 people commemorating the 50th anniversary of the Cathedral of Our Lady Assumed Into Heaven and St. Nicholas in Galway Aug. 14. Boston Cardinal Richard Cushing represented Blessed Paul VI at the dedication of the cathedral in 1965.

In his homily, Cardinal O’Malley spoke of the deep historic links between the United States and Ireland and particularly between his city of Boston and Galway.

He noted that Massachusetts was a Puritan colony that was historically hostile to Catholicism, where Catholics were forbidden residence, priests imprisoned, and an effigy of the pope was burned every November on Boston Common.

But all of this changed following the 19th-century famine in Ireland that sent millions of Irish across the sea to start a new life and to send help back to those who stayed behind.

“As a young seminarian, I was here in Ireland when John F. Kennedy, the first Irish Catholic president of the United States, came to visit the land of his ancestors. He received the cead mile failte, the 100,000 welcomes of the Irish people,” he recalled.

“In Boston, we are very proud of our Irish heritage,” he said.

NEXT: Pope: Keep work, prayer and time for family in balance