Pope: Keep work, prayer and time for family in balance 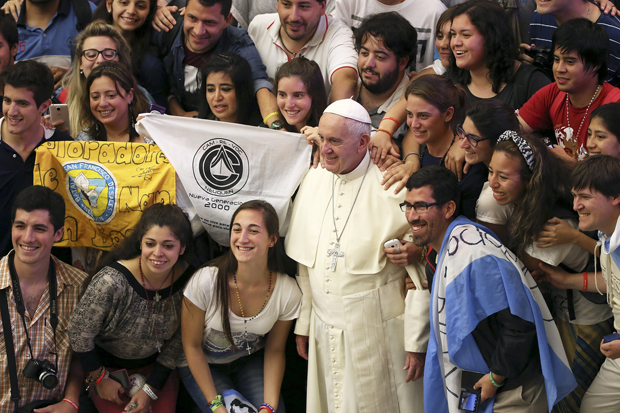 Pope Francis poses for a photo with Argentine youths during his weekly audience in Paul VI hall at the Vatican Aug. 19. (CNS photo/Alessandro Bianchi, Reuters) 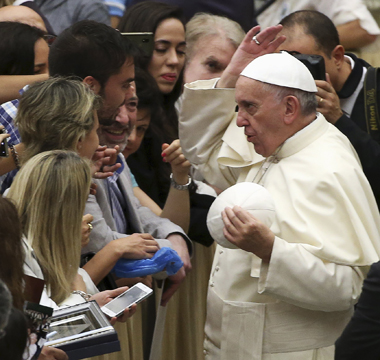 Pope Francis has fun exchanging his zucchetto, or skull cap, with a pilgrim during his weekly audience in Paul VI hall at the Vatican Aug. 19. (CNS photo/Alessandro Bianchi, Reuters)

VATICAN CITY (CNS) — Work is an important expression of human dignity and of caring for one’s family, but today there is a “dangerous tendency” to consider a worker’s family obligations as an obstacle to productivity and profit, Pope Francis said.

“But let’s ask ourselves: What productivity? And for whom?” he said Aug. 19 at his weekly general audience as he continued a long series of audience talks about the family and family life.

“Work, in its thousand forms, beginning with housework, is about caring for the common good,” providing for one’s family and cooperating with God in creating goods and services that are useful to others, the pope said.

To say someone is a “hard worker,” he said, is a compliment, just as saying someone “lives off” of another is a put down. St. Paul, in 2 Thessalonians, tells Christians that if they do not work, they should not eat. “It’s a great recipe for losing weight, eh?” the pope said.

“Work — and I repeat, in all its forms — is human. It expresses the dignity of being created in the image of God, which is why it can be said that work is sacred,” Pope Francis told pilgrims gathered in the Vatican audience hall.

Work is so important for individual identity, for the ability it gives people to support their families and for its contribution to the community that creating and organizing employment is a huge “human and social responsibility, which cannot be left in the hands of a few or pushed off onto a divinized market,” the pope said.

“To cause the loss of jobs is to cause great social damage,” he said.

“It makes me sad when I see there are no jobs, when there are people without work who cannot find a job and who do not have the dignity of being able to bring bread home,” he said. “And I rejoice when I see governments making great efforts to promote employment, to find jobs and to try to make sure everyone has work.”

Work is part of the normal rhythm of life for individuals and for families, he said. It must alternate with times of rest or celebration and, especially, time for prayer.

Balance is important, Pope Francis said, for protecting individuals, their families, society and the environment.

Attitudes toward work that consider the family an obstacle to productivity, he said, also tend to see the workforce as something “to assemble, use or dispose of” only according to how much money it makes.

The family is “the proving ground” of labor policies, he said. “When the organization of work takes the family hostage or blocks its progress, then we can be certain society has begun working against itself.”

Christian families, the pope said, have a mission to remind the world of the fundamental principles of God’s creation and God’s plan: “the identity and bond between man and woman; the generation of children; work that tames and makes the world habitable.”

“The loss of these fundamentals is a very serious matter and in our common home there are already too many cracks,” Pope Francis said.

“The beauty of the earth and the dignity of work were made to go together,” he said. But when the family, the earth or labor are “hostage to the logic of profit,” then everything is poisoned and the poorest families suffer most.

“The task isn’t easy. Sometimes it seems that families are like David facing Goliath, but we know how that story ended!” Pope Francis said.

NEXT: Head of Scottish bishops apologizes to abuse victims, Catholics