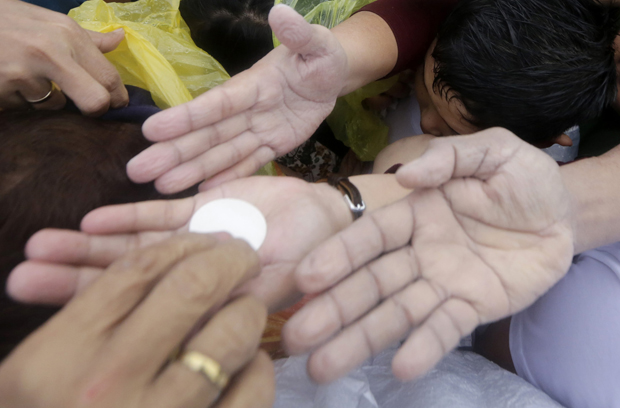 Pilgrims reach to receive Communion as Pope Francis celebrates Mass Jan. 18 in Manila, Philippines. As Catholics prepare for the world Synod of Bishops on the family in October, a number of church leaders and theologians are discussing ways to reach out to divorced and civilly remarried Catholics. (CNS photo/Francis Maalasig, EPA)

VATICAN CITY (CNS) — The discussion at last year’s extraordinary Synod of Bishops on the family was lively — some media coverage made it sound like a battle — and a new book from the Pontifical Council for the Family shows the debate continues.

“Family and Church: An Indissoluble Bond,” published this summer only in Italian, is a collection of presentations by theologians and canon lawyers gathered by the council for three full days of discussion and debate.

Their consensus is that the church must do something to present more clearly its teaching on marriage; it must do more to help young couples prepare for marriage; it must be more effective in helping couples in trouble; and it must reach out to those who divorced and remarried without an annulment.

At the same time, the text indicates that many bloggers and reporters are wrong when they try to pigeon-hole church leaders as being in either-or categories of loving ministers of God’s mercy or strong defenders of God’s truth. The challenge lies in being both.

The meetings brought together two dozen participants, men and women, most teaching at pontifical universities in Rome, including the Pontifical John Paul II Institute for Studies on Marriage and Family. The experts — Europeans, an Indian, Africans and South Americans — met in January, February and March.

Archbishop Vincenzo Paglia, president of the family council, told an Italian Catholic magazine that finding pastoral approaches to express God’s mercy while being faithful to church teaching is complicated. However, he told Famiglia Cristiana, “It is pharisaical to limit ourselves to repeating laws and denouncing sins. The church must be frank in admonishing, but it also must be ready to find new paths to follow.”

One of the paths suggested before and during last year’s extraordinary Synod of Bishops on the family was a “penitential process” that gradually would lead some divorced and civilly remarried Catholics to confession, absolution and Communion.

Participants at the family council’s meetings explored the idea, giving suggested steps and highlighting potential pitfalls beginning with the obvious danger of signaling to the couples and the world at large that perhaps some sacramental marriages are not indissoluble after all. But doing nothing, several said, risks signaling that entering a new union — even after being abandoned by a husband or wife — is the only situation where the church cannot be a minister of God’s forgiveness.

In his presentation, Father Giampaolo Dianin, an Italian professor of moral theology, insisted forgiveness is not “some kind of amnesty.” In Catholic teaching it is “a free and full gift of God which asks for and provokes a commitment to repair, begin again and rebuild.”

A possible “penitential path,” he said, would include:

— A diocesan bishop appointing a priest or a team of qualified people to evaluate individual cases and accompany the applicants, first determining if they have the grounds for an annulment, which would allow them to have their new union blessed as a marriage.

— Evaluating the solidity of the second union and the commitment of the couple to live seriously as Christians.

— “Readmission to the sacraments could be full or partial.” Some might maintain that permanent readmission downplays the fact that the second union is not a sacramental marriage, Father Dianin said; they would allow the couple to receive absolution and Communion during the Easter season and on special occasions.

In Father Dianin’s process, there is no requirement that the couple abstain from sex, living “as brother and sister.” In current church practice, that is what is required of divorced and civilly remarried Catholics who want to receive the sacraments.

Father Dianin and several other participants said that beyond the difficulty, and perhaps impossibility, many couples would have in fulfilling that requirement, there is a theological problem in suggesting that the spiritual and corporal aspects of love can and should be separated. In addition, Father Alberto Bonandi, another theologian, said it gives the message that the sexual relations in a new union are the only way the couple is living in conflict with their original marriage bond when, in fact, they have withdrawn their affection and are building a life with someone else.

Father Eugenio Zanetti disagreed. The Italian canon lawyer outlined not a “penitential path,” but what he called a “path of conversion to Love,” meaning to God who is love.

The process would begin with a year of individual and group prayer and reflection, particularly looking at the obligations that remain to the spouse and any children from one’s sacramental marriage, he said. During Lent, the prayer would intensify and the reflection would include attention to the Christian understanding of sexuality. At the end of Holy Week, the couple would be invited to confession, “recognizing their sins, including their complex and not fully correct marriage situation.” As a condition of granting them absolution, the church would ask for a promise that they abstain from sexual relations during the Octave of Easter, which would permit them to receive Communion on Easter and on Divine Mercy Sunday.

Publishers have announced the coming release of other books on Catholic teaching and the family before the world Synod of Bishops on the family begins Oct. 4. One of them, coming from Ignatius Press, is: “Eleven Cardinals Speak on Marriage and the Family: Essays from a Pastoral Viewpoint.”

The book, widely expected to be cautious about broadening the church’s “penitential path,” is described by the publisher as steering “a wise and merciful course that engages genuine concerns, while avoiding false compassion, which compromises both truth and authentic love.”

The discussion and debate continues.

PREVIOUS: Some say exchange of shots at border not big news in South Korea