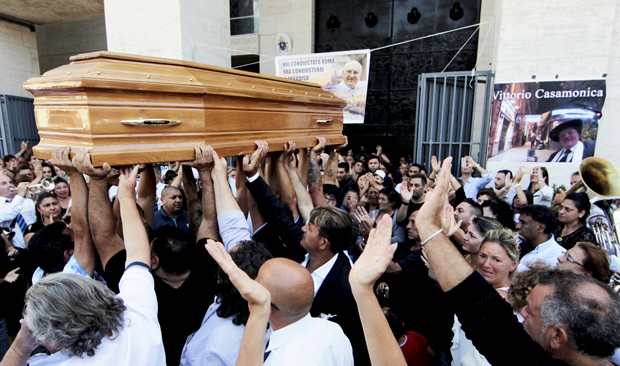 People carry the casket of Vittorio Casamonica into St. John Bosco Church in Rome for his Aug. 20 funeral Mass. Television programs, coffee bars, Italian Twitter accounts and the corridors of political power were abuzz Aug. 20-21 with news and commentary about the extravagance surrounding the funeral of the reputed boss of an organized crime ring in Rome. (CNS photo/Reuters)

ROME (CNS) — Television programs, coffee bars, Italian Twitter accounts and the corridors of political power were abuzz Aug. 20-21 with news and commentary about the extravagance surrounding the funeral of the reputed boss of an organized crime ring in Rome.

The funeral Mass for Vittorio Casamonica, 65, was celebrated at St. John Bosco Church in southeast Rome Aug. 20. His body was carried to the church in an antique gilded black hearse drawn by six black horses. When it arrived at the church, a band outside played the theme song from the film “The Godfather.”

A poster hung over the entrance to the church said, “You conquered Rome, now you will conquer heaven.” Another, taped to a column alongside the entrance, proclaimed him “King of Rome” and featured a photo of Casamonica dressed in a white suit and wearing a large cross, a photo of the dome of St. Peter’s Basilica and one of the Colosseum.

After the Mass, a helicopter flew over and dropped rose petals, and the coffin was transported to the cemetery in a Rolls-Royce hearse.

Raffaele Clemente, the commander of Rome police, was criticized on Twitter for the police being present, but doing nothing to stop what has been described as a “show funeral.” Clemente responded that the police directed traffic around the church “because that was their obligation.”

Vatican Radio reported Aug. 21 that officials from the Diocese of Rome were “ashamed” at the “Hollywood scene” outside the church, but insisted church officials had no control over what happened on city property.

The Mass itself was a normal Catholic funeral “without any element disruptive to the religious climate,” according to the diocese.

“During the Mass, mercy, hope and repentance were the only things talked about. What happened outside — diocesan sources said — was done without authorization,” Vatican Radio reported.

When Casamonica’s family requested the funeral, the sources said, “the pastor evaluated it on the basis of canon law and could not refuse to celebrate the funeral.”

Rome Mayor Ignazio Marino and Italian Interior Minister Angelino Alfano have called for investigations into how the scene outside the church was planned and executed.

Marino tweeted late Aug. 20, “It is intolerable that funerals become instruments for the living to send mafia messages.”