At White House, hours in line for brief welcoming ceremony 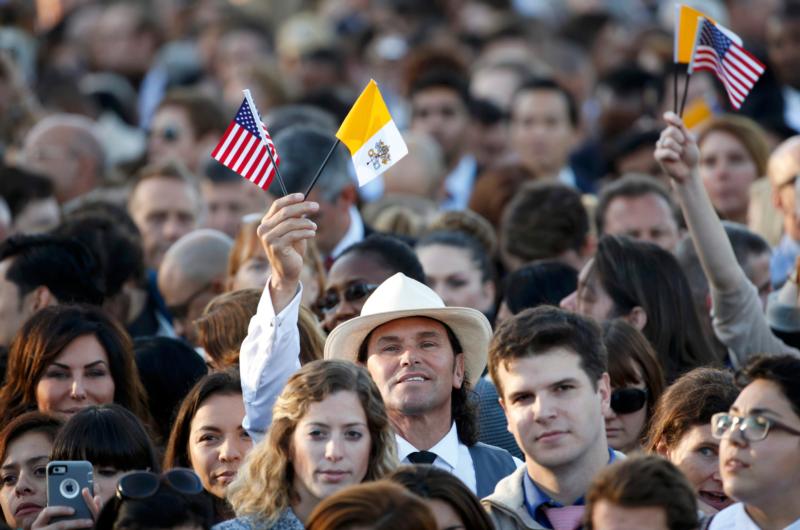 WASHINGTON (CNS) — The 11,000 ticketed guests and a cast of hundreds extra — military units, musicians and federal employees — who waited on the White House lawn to greet Pope Francis Sept. 23 were clearly there as fans of the visiting pope.

As the sun rose over a spectacularly blue September sky, a cross section of the U.S. population from across the country waited for hours for a welcoming ceremony that was over in a matter of minutes.

Blocks-long lines for security checkpoints stretched through closed-off streets in the hours before dawn. On the grounds of the White House and its adjacent buildings, yellow-and-white Vatican flags flew alongside the U.S. Stars and Stripes.

Once through security, people then spent a couple more hours waiting on the South Lawn, with musical selections provided by military bands.

As the designated time drew near, circling helicopters and eventually the revving of motorcycles at the lead of the papal motorcade signaled the approach of the third pope to visit the White House.

When the small Fiat carrying Pope Francis looped onto the White House driveway, those standing farthest from the small stage set up on the lawn were the first to get a glimpse, sending up a chorus of cheers that moved through the crowd, mirroring the car’s path.

At the top of the driveway, President Barack Obama and first lady Michelle Obama greeted the pope for the second time in as many days, having first welcomed him at Joint Base Andrews on Francis’ arrival from Cuba the afternoon of Sept. 22.

The prepared remarks of both Obama and Pope Francis were met with cheers and applause every few lines. Obama told of his early work as a community organizer for Catholic organizations in Chicago and ticked off a list of issues on which his administration and the Holy See have collaborated, including the resumption of diplomatic ties with Cuba and environmental protections.

For his part, speaking in heavily accented, carefully pronounced English, Pope Francis drew cheers with his acknowledgement of the role of immigrants in his life — his parents emigrated from Italy to Argentina before he was born — and in the history of the United States. Talking about climate change and the legacy it may leave future generations, he observed that millions of people live under a system “which has overlooked them.”

Quoting the Rev. Martin Luther King Jr., Pope Francis noted: “We can say we have defaulted on a promissory note and now is the time to honor it.”

Among the more vocal contingents, an enthusiastic group of people from the Argentine Embassy waited to greet their fellow countryman, the first pope from the Americas. Other guests included two dozen mayors from across the country, students from Washington, Maryland and Virginia Catholic high schools and individuals who traveled from Texas, New York and just across town.

The St. Augustine Gospel Choir, from the oldest black Catholic parish in Washington, closed the morning’s events with a song.

Following the brief ceremony, the Obamas and the pope stepped into the White House, where the president and the pope sat down for private talks in the Oval Office.

The two also exchanged official gifts. Pope Francis gave the president a bronze bas-relief of a medallion from the World Meeting of Families, the Philadelphia event which drew the pope to the United States this week.

Obama presented Pope Francis with a sculpture of an ascending dove, incorporating an original armature bar from the Statue of Liberty, preserved during the statue’s centennial restoration, the White House said. The sculpture’s pedestal was made from wood reclaimed from the White House lawn, with a personalized inscription.

Obama also presented a key from the Maryland home of St. Elizabeth Ann Seton. The first U.S.-born person to be named a saint, was canonized 40 years ago this September.