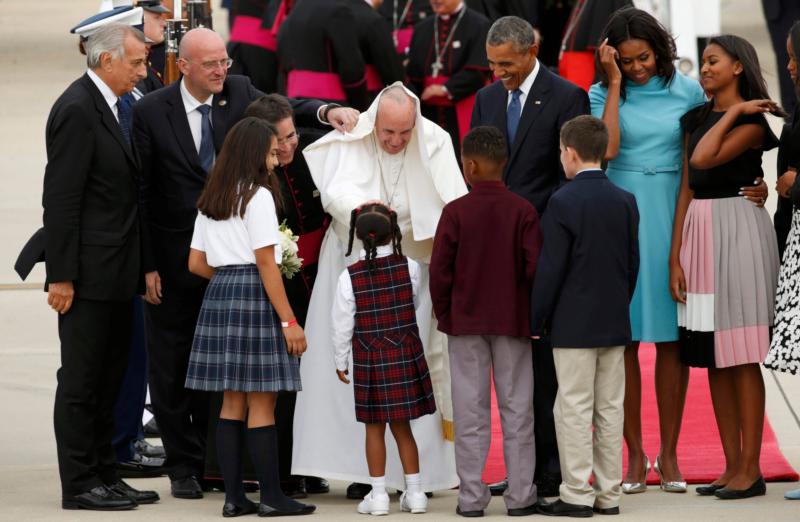 Catholic school students welcome Pope Francis to the United States on the airfield at Joint Base Andrews outside Washington Sept. 22. Standing beside the pope is U.S. President Barack Obama and his family. The students are from left, Jocelyn Aquino, Karlena Somerville, Langston Davis and Zachary Alderman. (CNS photo/Kevin Lamarque, Reuters)

WASHINGTON (CNS) — Parishioners and visitors attending the predawn bilingual Mass at the Shrine of the Sacred Heart Church in Washington Sept. 23 were urged to pray that the pope’s words during his U.S. visit would have an impact.

Pray that “all will hear his message and that this country will receive what he says: the message of Christ,” said Capuchin Franciscan Father Moises Villalta, pastor of Sacred Heart, in his homily.

The crowd, who filled the dimly lit church to overflowing, gathered first for Mass and then to walk together to the papal parade route on Constitution Avenue about two miles from the church.

While waiting on the sidewalk and the church steps after Mass, many parishioners in the predominantly Spanish-speaking parish told Catholic News Service they felt the pope was bringing them hope.

His recent words about welcoming immigrants and refugees particularly struck a chord with many of them.

“He understands our community,” said Marlena Aquino, adding that it was a blessing to be able to see him.

Hever Leonzo said he hopes the pope brings a “positive message, especially about immigration” to the United States and the world.

He said it is exciting “as a Catholic to have our leader visit us,” with the message of Christ, but he also noted that the pope has a message for non-Catholics.

Many parishioners said the pope’s message would not be something hard to understand. As Aldo Ramos put it: “He will say everyone needs to love each other.”

But that’s not to say the challenge is an easy one to live out. Sister Leticia, a Capuchin Poor Clare, said what the pope is asking for is unity in families and the unity of all Christians.

His message is not always spoken either. Jocelyn Aquino, a seventh-grade student at Sacred Heart School and one of three youngsters who greeted Pope Francis at Joint Andrews Base, Maryland, said: “The pope’s smile said more than words.”

The 12-year-old hadn’t had much time to reflect on seeing the pope up close and shaking his hand but she had been asked about it by many reporters that afternoon and she said she watched herself on the news when she got home that night.

Even though her meeting occurred before the pope had addressed anyone in the United States, she said she believed he would speak here “in a way everyone would understand.”

NEXT: At White House, hours in line for brief welcoming ceremony