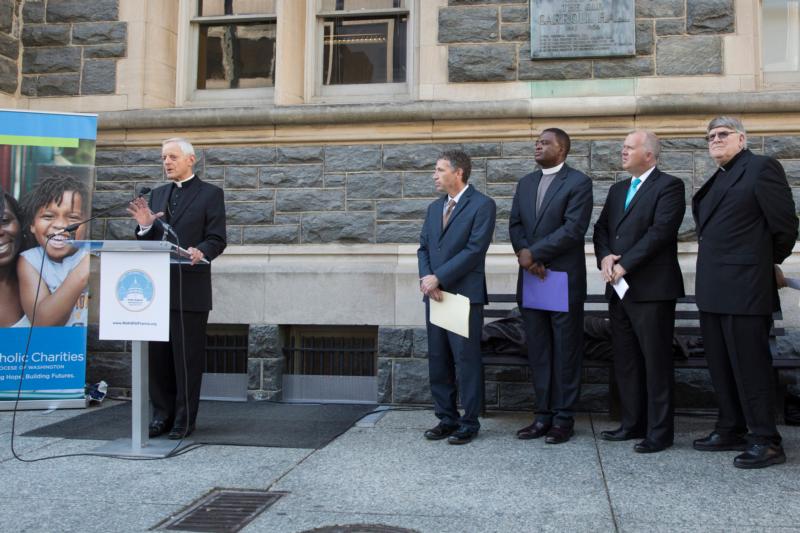 WASHINGTON (CNS) — As part of the Walk With Francis Pledge campaign to benefit the local community and reach out to those in need in the days leading to Pope Francis’ Sept. 22-24 visit to Washington, a group of Christian leaders is advocating for “a fair and more welcoming” criminal justice system in this country.

Cardinal Donald W. Wuerl of Washington joined with other Christian leaders Sept. 11 to advocate for a criminal justice system that “aids those who have paid their debt (to society) and are ready to rejoin us.”

The Christian leaders, in a news conference organized by the U.S. Conference of Catholic Bishops, said Pope Francis’ visit to the United States is an opportune time to advocate for sentencing reform laws and laws to counter recidivism. Pope Francis is a frequent visitor to those in prison, and will visit prisoners at a Philadelphia correctional center Sept. 27.

“During this momentous visit, we will walk with Francis when he speaks to Congress, visits the White House and addresses the United Nations,” said Jonathan Reyes, executive director of the USCCB’s Department of Justice, Peace and Human Development. “We will also Walk with Francis when he visits Curran-Fromhold Correctional Facility in Philadelphia.”

“There is currently an active debate on (criminal justice) reform that is bipartisan and interreligious,” Reyes said. He said that as lawmakers consider reform legislation, “this is a great moment to walk with Francis.”

The Walk With Francis Pledge campaign — jointly sponsored the Archdiocese of Washington and its Catholic Charities arm — invites people to serve others in their community and then share their pledge on social media. The pledge involves three ways to “Walk with Francis” — through prayer and learning about the faith; through charitable service to others; and through taking action to spread the Gospel in families, workplaces and public policy.

“Pope Francis gives us a very visible sign how to care for those incarcerated. His is a pastoral approach,” Reyes said.

Msgr. John Enzler, the president and CEO of Catholic Charities of the Archdiocese of Washington, pointed out that Catholic Charities has for nearly two decades run a Welcome Home Program to assist those how have formerly been incarcerated.

“We are not huge, but we are effective,” he said.

Rudolph Washington, who is currently in the Welcome Home Program, said his participation “has given me a new lease on life and helped me learn about myself. I am grateful.”

Washington will be inside St. Patrick’s Church Sept. 24 when Pope Francis visits there. He will be one of five Welcome Home clients representing prisoners and returning citizens struggling in the metropolitan area.

Other speakers at the news conference included a Methodist minister, the Rev. Maidstone Mulenga, the assistant to Bishop Marcus Matthews of the Baltimore-Washington Conference of the United Methodist Church.

“The Methodist Church is committed to Walk With Francis, especially for people impacted and severely harmed by the criminal justice system,” Rev. Mulenga said. “We should be ashamed that there are more young black men in prison than in college.”

He said that the call for reform of the criminal justice system “shows (those incarcerated) they are not forgotten. They are loved.”

“We do not believe in retribution. Restorative justice is our call,” he added.

Craig DeRoche, a former speaker of the Michigan House, and currently vice president of the Justice Fellowship, said Pope Francis’ “example of compassion and care … shows us we can make a difference.”

Justice Fellowship is the public policy arm of Prison Fellowship, an evangelical Christian outreach to prisoners, former prisoners and their families that was founded by Chuck Colson, a former aide to President Richard Nixon. Justice Fellowship advocates for criminal justice reform based on the principles of restorative justice found in the Bible.

The outreach organized a campaign asking prisoners to write letters addressed to the pope.

“Pope Francis has demonstrated faith through humility,” DeRoche said. “It is wonderful to see Catholics, evangelicals and Methodists working together to care about prisoners.”