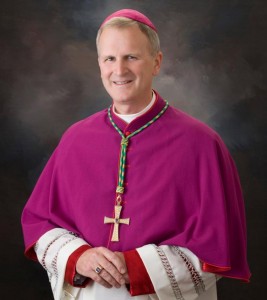 The appointment was announced in Washington Sept. 15 by Archbishop Carlo Maria Vigano, apostolic nuncio to the United States.

Calls for Bishop Finn’s resignation or removal followed his conviction in 2012 on one misdemeanor count of failing to report suspected child abuse. The situation developed after a diocesan priest’s computer was found in 2010 to have contained child pornography, but the diocese did not report the situation to civil authorities for another six months.

Archbishop Joseph F. Naumann of Kansas City, Kansas, has been apostolic administrator of the diocese since the bishop resigned.

Bishop Johnston’s installation Mass will be Nov. 4. Until then he will continue as administrator of Springfield-Cape Girardeau. His episcopal motto is: “The love of Christ urges us on.”

Born Oct. 16, 1959, in Knoxville, Tennessee, he is the oldest of four children of Vann and Patricia (Huber) Johnston. He attended Catholic grade school and high school. As a youth he was active in the Boy Scouts of America and was awarded the rank of Eagle Scout.

In 1982, he graduated from the University of Tennessee in Knoxville with a bachelor of science degree in electrical engineering. From 1982 to 1985, he worked in Houston for an engineering consulting firm and for an electric utility.

In 1985, he left his occupation to pursue a call to the priesthood. From 1985 to 1990, he attended St. Meinrad College and School of Theology in Indiana, where he obtained his master of divinity degree.

He was ordained a priest of the Knoxville Diocese June 9, 1990, at his home parish, Holy Ghost Church in Knoxville. After ordination he held a number of pastoral assignments, including as chaplain and teacher at Notre Dame High School in Chattanooga, Tennessee.

He has a canon law degree from The Catholic University of America in Washington and also served as chancellor and moderator of the curia for the Knoxville Diocese.

In his free time, Bishop Johnston enjoys sports and spending time hiking and exploring the mountains, woods and terrain around the United States and Canada.

In 2005, he and two other priests received the Citizen’s Award for Bravery from the U.S. Department of the Interior for helping save a father and two of his children from plunging over a waterfall in Glacier National Park in Montana.

The award is given to “private citizens for their heroic acts or unusual bravery in the face of danger.”

On March 31, 2008, he was ordained the sixth bishop of Springfield-Cape Girardeau, succeeding Bishop John J. Leibrecht, who retired.

During Bishop Johnston’s tenure in as head of that diocese, Catholic Charities of Southern Missouri was established, serving thousands of people across the southern portion of the state. In 2011, Trinity Hills Catholic Worker House and Farm was instituted for prayer, service and formation.

In August 2014, he traveled some 2,300 miles in 17 days to visit each parish and mission church in the diocese to establish its new vision, priorities and goals: “One Church, East to West: Loving Jesus, Serving Jesus, Sharing Jesus.”

Since 2008, four Catholic radio stations have been launched in the diocese.

On the national level, he has served on the U.S. bishops’ Committee on Child and Youth Protection and is currently episcopal liaison to the National Council of Catholic Women.

Bishop Johnston is a fourth-degree Knight of Columbus and a member of the Equestrian Order of the Holy Sepulchre.

The Diocese of Kansas City-St. Joseph comprises more than 15,000 square miles. Out of a total population of 1.5 million people, about 8 percent, or close to 126,000 are Catholic.

NEXT: More must be done to help Middle East Christians, say speakers