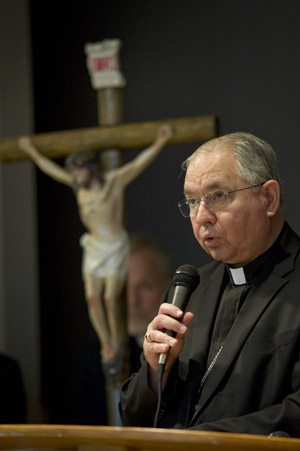 LOS ANGELES (CNS) — California’s newly passed measure to legalize assisted suicide for the terminally ill “is no way for our government to make policy on a life and death issue that will affect millions of individuals and families,” said Los Angeles Archbishop Jose H. Gomez.

“I am deeply disturbed by the California Legislature’s decision to allow doctors to help their patients kill themselves,” he said.

He made the remarks in a statement issued the night of Sept. 11, not long after the state Senate approved the bill with a 23-14 vote.

The state Assembly passed the bill two days earlier 44-35. It has been sent to Gov. Jerry Brown for his signature, but as of Sept. 14, he had not indicated whether he will sign it.

According to an AP story, the bill requires that a patient with a terminal disease must be physically capable of taking medication that would end his or her life. It says that a patient must submit written requests for the medication, that two doctors must approve the request and that there must be two witnesses.

Archbishop Gomez noted in his statement that in early July, a previous bill to allow doctor-assisted suicide was pulled by its primary sponsors hours before a state Assembly hearing on it. The bill had already passed the state Senate, with votes largely along party lines. But the bill’s authors had said it was dead for this year.

However, the Legislature called a special session to deal with a number of issues, including the assisted suicide bill and “chose to rush this legislation through in less than three weeks, holding only two hearings,” Archbishop Gomez said.

“As a result, lawmakers did not have any chance to consider the deeper issues raised by end-of-life care in the state,” he continued. Those issues, he said, include “the cost of treatments, especially the cost of cancer medications; insurance practices that limit access to hospice care and physicians’ options in providing adequate pain relief; the impact of this legislation on the poor and other underserved populations.”

“The people of California — especially the poor, the elderly, minorities and the disabled — deserve much better from their leaders. And make no mistake, it will be these most vulnerable populations who are going to suffer from this legislation.”

Archbishop Gomez is a member of the Legislation and Public Policy Committee of the California Catholic Conference, the public policy arm of the state’s Catholic bishops.

He urged the measure be vetoed and said the legislation, as well as the process by which it was passed, “is not worthy of our great state, which continues to do so much to promote human dignity and equality of access to health care.”

Disability rights advocates have campaigned against the bill. Those backing it include the parents and husband of Brittany Maynard, a California woman who, upon learning she had a terminal illness, moved to Oregon last year so she could take advantage of that state’s physician-assisted suicide law.

Stephanie Packer, 32, a wife and mother of four, was told in 2012 she had three years to live. She is affected with scleroderma, which is a hardening of the skin and connective tissues. All the scarring caused by the disease has paralyzed her gastrointestinal tract, requiring her now to take all of her nutrients through a tube.

“If everyone had a doctor who cared, no one would even consider ending their own life,” she said in a posting on her website, stephaniesjourney.org. “Patients don’t know how to find that doctor or how to navigate the complicated health care system and they don’t have the tools or information they need. They’re so tired and don’t have the strength to deal with the fight. Instead, they’ll take the assisted suicide option because it’s easier.”

Archbishop Gomez in his statement said those who will be most affected by doctor-assisted suicide will be poor families, African-Americans, Latinos and immigrants, because they do not have access to quality health care and have limited treatment options when they face a serious or terminal illness.

“In a health care system that is cost-conscious and profit-driven, do we really imagine that these vulnerable populations will have a ‘choice’ to receive end-of-life care once we make lethal prescriptions an acceptable ‘treatment option’?” he asked.

He said the bill gives those relying on subsidized health care “no explicit rights or guarantees that they will be able to choose to be treated and cared for rather than to kill themselves.”

He added that the measure “only deepens the divides in our society along the lines of race, ethnicity and income. The reality is that millions of Californians do not have the luxury to advocate for ‘death’ with dignity are too busy struggling against poverty, discrimination, disability, illness and crime.”