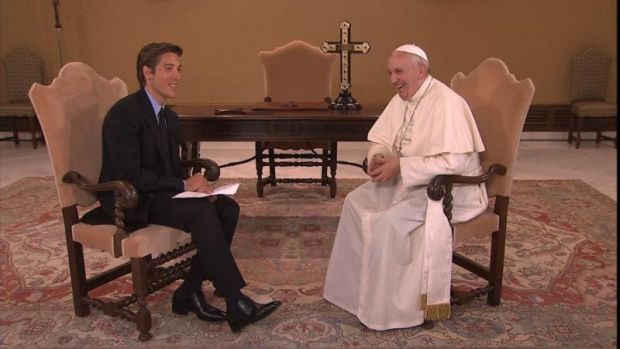 David Muir, anchor of ABC's "World News Tonight," talks with Pope Francis at the Vatican during a virtual town hall meeting with Catholics in Chicago, Los Angeles and McAllen, Texas, Aug. 31. The meeting via satellite link was arranged and hosted by ABC News. (CNS photo/courtesy of ABC News) 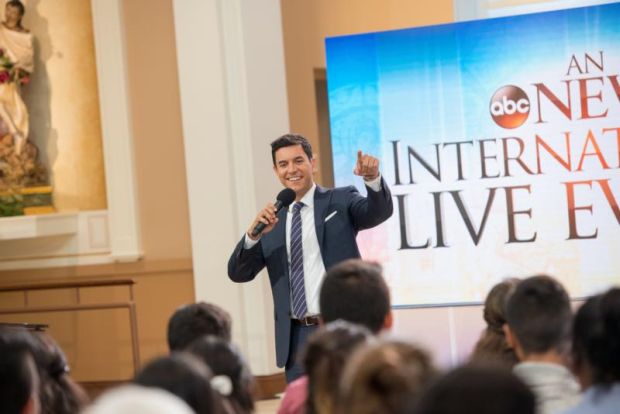 WASHINGTON (CNS) — Pope Francis gave words of affirmation and encouragement to predominantly Hispanic audiences gathered in Los Angeles, Chicago and a small town on the U.S.-Mexico border who had little clue they had been selected for a “virtual audience” with the pope.

The audience was arranged by ABC News, which aired major excerpts of the audience Sept. 4 on “Pope Francis & the People,” a special installment of its “20/20” newsmagazine.

Pope Francis consoled Valerie Herrera, a student at Cristo Rey High School in Chicago, who has been suffering since age 4 with vitiligo, which has turned many patches of her skin white.

“Once I started growing up, I didn’t see it as such a big deal, but when I actually started growing up and I started going to school, well, you know I was picked on, I was bullied, because of how I look,” she told Pope Francis, who was seated in a makeshift studio at the Vatican with “ABC World News Tonight” anchor David Muir.

“But with the help of my family, I was able to overcome it, and with music, which is something that I loved ever since I was a child,” Herrera told the pope. After she asked the pope what he expected from youth, Pope Francis replied, in one of the few instances in which he spoke in English: “I would like to hear you sing. May I ask of you to sing a song for me?”

With cheers from her fellow students and Herrera nearly overcome with emotion, it took her a half-minute to think of a song to sing. It was a Spanish Marian hymn, “Junto a Ti, Maria.”

Then, answering her in Spanish — ABC News provided the interpretation — Pope Francis said, “What I hope for from youth is for you all not to walk alone in life. … Life is very difficult. It’s very difficult to walk alone. You get lost, you get confused, you can find the wrong path. Or you can be walking around in circles in a maze. Or the worst: You can stop because you get tired of walking in life. Always walk hand in hand with someone you loves you, someone who gives you tenderness.”

The pope added, “Always move forward with courage and with hope. And if you ask God, God will give you that. That’s my response. And thank you for the song.”

In Los Angeles, the pope talked briefly about his Sept. 22-27 visit to the United States. “That is why this trip is so important,” he said, “for me to trace your path, your history.”

Pope Francis also was introduced to Rosemary, a single mother, and daughters Celeste and Elissa. Their last names were not given.

Rosemary and her daughters are now living in their first apartment since arriving in the United States after having lived in shelters in Los Angeles.

Rosemary curled her hands to form a heart before telling Pope Francis, “It’s hard for me to be a single mom. It’s hard for me to hear my daughter tell me these things. I wish that it was different, that we were a family, a mom and dad. … I’ve made some mistakes, as a person, as a mother. I felt guilty at times and ashamed. I just remember down deep inside my heart, I would remind Elissa and Celeste and tell them, ‘It’s OK. We’re OK. We have each other, and that’s what’s important, and we can still do it.’” 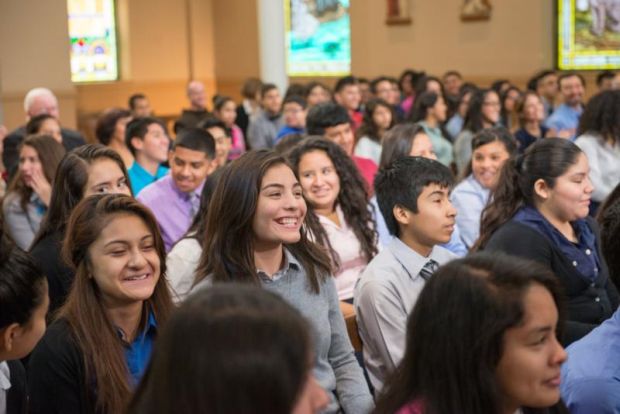 She added, ‘Every day, I hope and I pray. … I want to say thank you and I love you and God bless you.” Pope Francis thanked Rosemary for her ‘testimony.”

“I know it’s not easy to be a single mother. I know that people can sometimes look askance at you. But I’ll tell you one thing: You’re a brave woman. You’re capable of bringing these two daughters into the world,” Pope Francis told her. “You could have killed them inside your womb and you respected life. You respected the life you were carrying inside you. And God will reward for you that. He does reward you for that. Don’t be ashamed. Hold your head high. ‘I didn’t kill my daughters. I brought them into the world.’ I congratulate you. I congratulate you, and God bless you.

At Sacred Heart Church in McAllen, Texas, five miles from the Mexican border, Pope Francis surprised Sister Norma Pimentel, a Missionary of Jesus who is executive director of Catholic Charities of the Rio Grande Valley, by asking her to come forward, to hearty applause from those gathered in the church.

Pope Francis interrupted the ABC News moderator inside the church by pointing at Sister Norma. “She was hidden there among all the people,” he said. “Sister, I want to thank you and through you I want to thank all the sisters of religious orders in the U.S. for the work that you have done and will do in the United States. It’s great! I congratulate you. Be courageous. Move forward. Take the lead always.”

He told the nuns gathered inside the church, “I’ll tell you one thing. I don’t know if a pope should say this, but I love you all very much.”

Pope Francis also blessed a young boy. His mother, who crossed the border illegally from El Salvador, said he had cataracts. With the boy in his mother’s arms, the pope imparted a blessing.

NEXT: Three new auxiliary bishops ordained for the Archdiocese of Los Angeles