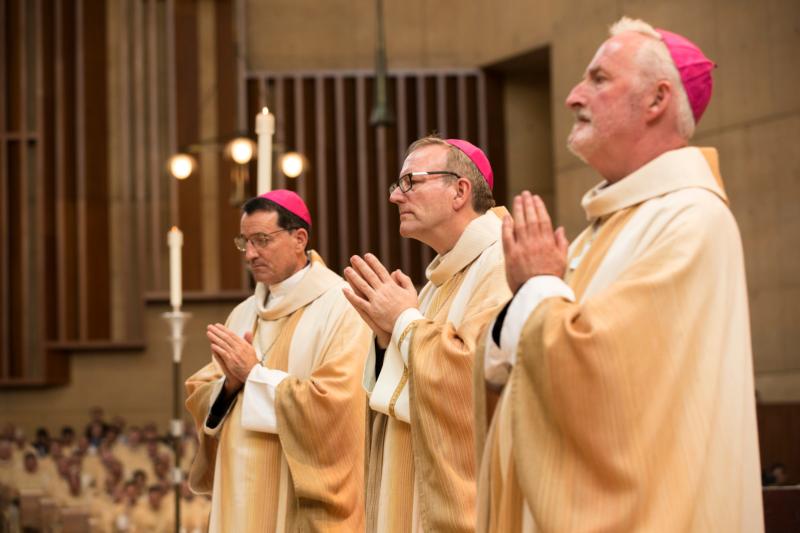 Auxiliary Bishops Joseph V. Brennan, Robert E. Barron and David G. O'Connell, pray during their Sept. 8 episcopal ordination at the Cathedral of Our Lady of the Angels in Los Angeles. (CNS photo/John Rueda, The Tidings)

LOS ANGELES (CNS) — Three new auxiliary bishops have been ordained to help shepherd the Archdiocese of Los Angeles, the largest in the United States.

Archbishop Carlo Maria Vigano, apostolic nuncio to the United States, presented the mandates from the Apostolic See. More than 500 Los Angeles and Chicago priests and 45 bishops from throughout the United States — including Cardinal Roger M. Mahony, retired archbishop of Los Angeles — concelebrated the Mass.

“Our Holy Father has said that there are three basic qualities that we should look for in a bishop,” Archbishop Gomez said in his homily to the thousands that filled the cathedral.

“As the famous expression indicates: ‘If he is holy, let him pray for us. If he is learned, let him teach us. And if he is prudent, let him govern us,'” the archbishop said. “So today we rejoice! Because we will ordain three fine priests, chosen because they are men of prayer, intelligence and prudence.”

Through the power of the Holy Spirit, God anointed the three men to be “successors of the Apostles and pastors of souls — to teach, sanctify and nourish the family of God,” the archbishop said.

He encouraged the new bishops to never forget where they come from and to never think that being a bishop makes them better or above anyone else. Being a bishop is a privilege of service, the archbishop said.

People come to bishops seeking friends, brothers and fathers. But above all, they come seeking the “face of God.”

“Mercy is the face of God,” the archbishop said. “So mercy must be the way of your ministry as bishops.”

Kieran O’Connell and his family traveled from Cork, Ireland, to witness the ordination of his brother.

“It’s fantastic for Ireland and for Cork,” he said. “He’s such a humble guy. It’s great to see him as a bishop.”

It proved to be an emotional week for the O’Connell family. Bishop O’Connell’s sister and other two brothers have already passed away, but Kieran O’Connell carried them and their parents in his heart.

“He’s a simple, loving person,” Kieran O’Connell said of his brother. “He’s a man of God. He has a profound love for God and for people. He’s always wanted to be a priest.”

Bishop O’Connell was ordained to the priesthood in 1979, having studied at All Hallows College in Dublin. He served as associate pastor and then pastor of several parishes in the Los Angeles Archdiocese.

“It is a wonderful time to be ordained auxiliary bishop as we plan for the Holy Year of Mercy,” Bishop O’Connell said.

“I hope we can all make this mission of showing the compassionate face of Jesus to the world. It has always been a privilege to minister here in the Archdiocese of Los Angeles, but most especially in these days. I look forward to great years ahead.”

He has worked alongside community leaders and law enforcement in various gang intervention programs in the inner city. He is also a member of the archdiocese’s pastoral committee on immigration.

Father Edward Benioff, director of the archdiocesan Office for the New Evangelization, recalled a day when Bishop Brennan returned to the rectory after anointing a parishioner in the hospital.

“I asked him how the parishioner was doing and he said the person died with family around and that everyone was weeping and mourning,” said Father Benioff, who was serving as Bishop Brennan’s associate pastor at the time.

“I also noticed that he was crying,” he added. “I said to him, ‘This is terrible’ and he agreed. However, when he realized how much love was burning in that hospital room he added, ‘And it was also very beautiful.’

“Only someone in touch with the mystery of God’s love could see the divine light in this very dark situation,” Father Benioff said. “Bishop Brennan will radiate God’s love for our local church.”

“I am humbled by this appointment and blessed to be able to continue to serve in such a beautiful community of faith,” said Bishop Brennan, who was ordained to the priesthood in 1980.

Father John Muir, a former student and now friend of Bishop Barron, traveled from the Diocese of Phoenix to attend the ordination.

“That energy to evangelize is here,” he said. “It’s a beautiful signal from Pope Francis that the pastoral life is evangelical. Everything about Christian life is about spreading the good news of our Lord.”

Bishop Barron was ordained to the priesthood in 1986 and began serving as associate pastor at St. Paul of the Cross Parish in Park Ridge, Illinois. He later became rector/president of Mundelein Seminary University of St. Mary of the Lake in the Archdiocese of Chicago.

“I am filled with gratitude to Pope Francis and to Archbishop Gomez for the confidence they have placed in me,” Bishop Barron said.

“I am also very excited at the prospect of serving the good people of the Archdiocese of Los Angeles and working with the priests and pastoral ministers who serve here.”

Bishop Barron is the founder of Word on Fire, a global media ministry that has been spreading the message of the new evangelization since 2000.

“I see my fundamental role as proclaiming Jesus Christ, risen Lord and fulfillment of the deepest desires of the human heart,” Bishop Barron said. “And I invoke the help of Our Lady of the Angels as I commence my ministry.”

NEXT: ‘Priesthood is countercultural,’ seminarians told as academic year begins