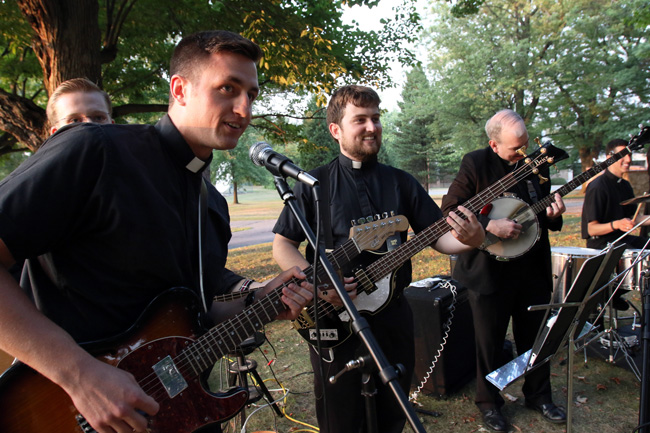 Seminarians Michael Plona, left, and John Wachowicz, center, of the Diocese of Rockville Centre, N.Y. prepare to perform with fellow rock band members of St. Joseph's Seminary in Yonkers, N.Y., during a barbecue Sept. 2. Ninety-two men are studying for the priesthood at the seminary in 2015-2016. (CNS photo/Gregory A. Shemitz)

YONKERS, N.Y. (CNS) — At St. Joseph’s Seminary in Yonkers, third-year student Tom Griffin said he finds “a sense of camaraderie here, of belonging, that you’re not in this alone.”

“You see here that the church is bigger than just your diocese. It’s a universal force,” he said about the flagship of the St. Charles Borromeo Inter-Diocesan Partnership in Spiritual and Theological Formation for Clergy, Religious and Laity.

Established by the Archdiocese of New York and the dioceses of Brooklyn and Rockville Centre in 2011, the partnership began its academic year in September with 92 seminary students from the originating dioceses; the Diocese of Albany; the Diocese of Bridgeport, Connecticut; the Syro-Malankara Catholic Exarchate; the Franciscan Friars of the Renewal; and the Piarists congregation.

“Seminary is not supposed to be easy. It’s supposed to be a bit of a challenge, a process of growing into who you are as a man and learning to be a good priest,” Griffin said. He is from Wantagh, in the Rockville Centre Diocese.

Griffin and other seminarians spoke with Catholic News Service Sept. 2 after a Mass to mark the opening of the academic year.

Brooklyn Auxiliary Bishop James Massa was the main celebrant of the late afternoon Mass in the seminary chapel. He told students, faculty, trustees, deacon candidates and guests the beginning of September is a “kairos” moment for seminarians. The bishop said it is an opportunity for decision and action, where the Holy Spirit meets future priests “on their journey and says ‘it’s time to choose to be with Jesus.'”

“Jesus in the Gospel does his best work after sunset. Evening time is a good time for God to prune us and for us to enter into his healing presence,” Bishop Massa said. A pre-sleep review, akin to the Jesuit examen practice in which God’s words become very powerful, “can possibly exorcise the bad spirits that throw us off track and make us forget why we’re here in the seminary in the first place.”

Bishop Massa urged students to demonstrate a humble openness to constructive criticism. “A capacity for criticism is a sign that one can lead others to reconciliation and a sign of a truly apostolic grace,” he said.

“Priesthood is countercultural. Many times people don’t understand,” Henry Torres said. He is a third-year student from Brooklyn. Being in a seminary environment with people from other dioceses and religious orders “has enhanced our discernment and the priestly experience. You see there are young men from different places discussing your same concerns,” he said.

Torres, whose parents emigrated from the Dominican Republic, said seminarians can use the interaction with people of different cultures “to enhance our ability to evangelize, and learn others’ experiences of evangelization. It opens the doors to dialogue,” he said. Students at St. Joseph’s come from 22 different countries.

The young inter-diocesan partnership model draws deacon candidates and laypeople into the seminary experience through classes that overlap with those of men studying for the priesthood.

Jerry Mathew, a fourth-year student from the Syro-Malankara Catholic Exarchate, said studying with the laity “gives us hope that our ministry will be helped by laity who are educated almost the same way we are. They have opportunities in their everyday lives we don’t have and the way they bring Christ to others is different. They complement what we do and we complement what they do,” he said.

With the inclusion of the laity living their own vocation, Torres sees “the reality of the Second Vatican Council vision to give laity the opportunity to be the hands of the priest in the world to evangelize. Our hands are expanding to reach out to people in ways that we can’t,” he said.

At St. Joseph’s and other seminaries, priestly formation integrates the human, spiritual, intellectual and pastoral dimensions described by St. John Paul II in his exhortation “Pastores Dabo Vobis” (“I Will Give You Shepherds”) and mandated by the U.S. Catholic bishops in their Program of Priestly Formation.

Fourth-year student Brother Innocent Montgomery of the Franciscan Friars of the Renewal said the dimensions or “pillars” are taught and demonstrated by the rector and the faculty. “At seminary, the challenge is we’ve got to live them every day and then integrate them into our life,” he said. “Our prayer life feeds our apostolic life and they all work together.”

Faculty advisers counsel students and advocate for them with other staff. Mathew said advisers are “a kind of liaison who also guide us and show us if we need to change.”

“These are the men who represent you when the faculty comes together. They want to mold you into the best priest you can be when you get to a parish. They understand parish dynamics and make sure you’re well-equipped with the four pillars to mold, form and guide the people of God, Torres said.

For the seminarians from St. Joseph’s, Pope Francis’ Mass at Madison Square Garden Sept 25 is an “all hands on deck” event. Some will serve at the altar, others will sing in the choir, and some will direct 20,000 worshippers through the labyrinthine halls of the arena.

Griffin will coordinate the schedule for the “Bodyguards of the Blessed Sacrament.” Hosts for the papal Mass will be consecrated the night before the event and secured in attended tabernacles accessible to sacristans during the Mass.

Griffin said his behind-the-scenes role is “a very powerful and awesome thing.”