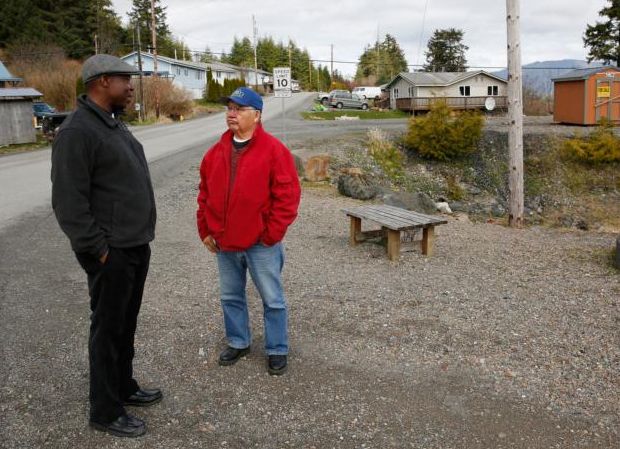 African Father Jean Paulin Lockulu, known as Father J.P. to his American parishioners, talks with a neighbor in Klawock, Alaska. Born and raised in the Congo, Father Jean was a religious missionary priest before joining the Diocese of Juneau in 2002. (CNS photo/Nancy Wiechec)

KLAWOCK, Alaska (CNS) — The challenges of managing most parishes don’t usually extend to needing to travel by airplane and boats to celebrate Mass.

But when your Delaware-sized parish is part of a diocese that itself is larger than 22 U.S states, the standard ways of operating really don’t apply.

Catholic News Service reporters visited communities across the country over the past few years in a project to learn about some of the parish structures that have evolved in the United States.

As Pope Francis visits the U.S. in September, the CNS parish studies became a way of looking at what it might take to give the pope a sense of some of the many different models that make up the “American Parish.”

Of the 17,340 U.S. parishes, 3,500 lack a resident priest, according to the Center for Applied Research in the Apostolate at Georgetown University. CARA notes that before the 1950s, it was rare to have more than one priest per parish in the U.S. After the number of priests-per-parish shot up to 1.79 in the 1960s, there’s been a steady decline, to the current number of .93 — less than one per parish.

In some of the most far-flung places, creativity paired with pioneering spirit are what parish management demands.

Among the more unusually structured parishes CNS visited was St. John by the Sea in Klawock, Alaska, on an island the size of Delaware, and where until recently an African immigrant priest was its pastor.

Father Jean Pauline Lockulu, an immigrant from the Democratic Republic of the Congo, was reassigned to another parish in the Juneau Diocese this year. But when CNS visited St. John by the Sea, Father Lockulu was handling almost all parish pastoral and administrative responsibilities as pastor of a one-man operation including writing, printing and distributing the weekly one-page bulletin.

St. John is the only Catholic parish on Prince of Wales Island in southeastern Alaska. Only about 2 percent of the population of 6,000 are Catholic, but they’re scattered around a territory that can be reached only from the mainland by plane or boat.

The pastor also oversees a mission church in Thorne Bay, 38 miles from Klawock, and celebrates Mass regularly in four other communities. Parish functions are managed by a core of about a dozen people among the 130 active parishioners.

The small size of the parish makes for an informal, friendly relationship among the parishioners and their pastor. “Just call and the priest will be there for you any day,” read a note in the parish bulletin during Father Lockulu’s time there.

So few bulletins are needed that Father Lockulu would occasionally hand write notes to parishioners right on the bulletin. The seven members of St. John’s parish council take on responsibility for whatever needs arise when the pastor is away at one of the far-flung communities.

The landscape of Alaska and some tiny Catholic communities makes running a diocese there all the more challenging, said Juneau Bishop Edward J. Burns.

Bishops Burns and 10 priests minister to 16 parishes and missions, as well as several smaller sub-missions.

He calls their work a “joy and adventure.”

“It’s a vast land,” he said. “There are a lot of challenges to getting around.” Some communities are accessible only by boat or plane. The village of Tenakee Springs has no roads at all.

“The plane becomes the modern-day church bell,” the bishop said. It signals to people in Alaskan towns and villages that a priest has arrived to celebrate Mass.

But sending priests around a diocese by plane can get costly, upward of $300 for one round-trip charter flight, he said.

PREVIOUS: How a Wisconsin town transforms its notion of parish

NEXT: In an era of fewer priests, some Catholic parishes are run by women