Amid refugee crisis, church agencies on the ground and offering homes 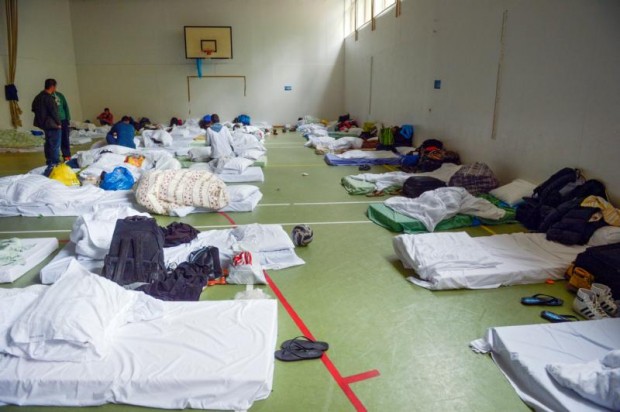 WASHINGTON (CNS) — The tens of thousands of would-be Syrian refugees who have flooded European countries this summer have prompted U.S. and international Catholic agencies to respond with both on-the-ground support and longer-term preparations to host them in the United States.

At points where refugees are in transit or are awaiting next steps, CRS offers “essential living supplies” that include sleeping bags and mats, hygiene materials, food and water.

Domestically, Migration and Refugee Services of the U.S. Conference of Catholic Bishops has been fielding offers from parishes that are willing to take up Pope Francis on his call for parishes, religious houses and colleges to welcome refugees.

William Canny, director of MRS, told Catholic News Service that his office is helping a half dozen dioceses that currently do not have refugee resettlement programs to launch them.

In an op-ed published by The New York Times Sept. 15, Canny joined calls for the United States to dramatically increase the number of refugees it admits, by accepting 100,000 Syrians in the next year.

Refugee Council USA, a coalition of religious and other nonprofit entities that work with refugees, in a Sept. 9 letter to President Barack Obama pleaded for the U.S. to increase its annual ceiling for refugee admissions to 200,000, with half of those slots going to Syrians.

The letter said “the vast majority of European countries have the capacity to welcome and provide protection for the refugees who are now risking their lives to find safety in Europe. However, the United States must show solidarity with its close allies in Europe and resettle a small number of refugees from Europe.” The letter said that could include families reuniting with their U.S. relatives, as well as unaccompanied refugee minors and refugees from Syria, Iraq and Afghanistan who have close ties to the United States.

The letter acknowledged U.S. support to date — $4 billion in funding for the humanitarian crisis — but noted that only 37 percent of the United Nations’ appeal for the crisis has been funded and encouraged the U.S. to donate more and to urge greater contribution from other countries.

“It is abundantly clear that the Syrian crisis is nowhere close to ending, and even when it does, the needs of those displaced by the crisis will take years, if not generations, to resolve,” the letter said.

Canny’s op-ed said “a robust U.S. commitment to the resettlement of Syrian refugees would encourage other reluctant nations, especially those in Europe, to accept more and to keep their doors open until this horrific conflict can be ended. It also would show that the United States is not indifferent to human suffering and remains, as always, a beacon of hope to the world.

Canny’s article noted that 4 million Syrians have fled their country in the five years of its civil war. Altogether, about half Syria’s population of 23 million before the war have been displaced from their homes. The World Population Review estimates about 5,000 people leave Syria daily.

The United States will admit close to the 70,000 refugees agreed to by Congress for the fiscal year ending Sept. 30, Canny told CNS. Few of those are from Syria and pretty much all of them have been out of their homelands and their applications for resettlement have been “in the pipeline” for years.

Richard Hogan, associate director of Diocesan Development and Support for MRS, said refugees from the Middle East generally have the longest wait to be admitted to the United States, up to a couple of years. That long process is usually the result of requirements for enhanced security checks or difficulty in reaching refugee populations in host countries, he said.

A State Department fact sheet said less than 1 percent of refugees worldwide are ever resettled in a third country. Only someone who has left their home country for an intermediate nation typically can apply for refugee resettlement.

Hogan explained that the multipart process begins at Refugee Service Centers around the world, funded by the State Department, where information is collected on potential refugees. The office of U.S. Citizenship and Immigration Services then interviews applicants to ensure they meet the criteria of fleeing persecution required for admission as refugees into the United States. Several levels of security checks follow that.

Ultimately, people who are approved for admission receive cultural orientation classes and their information is forwarded to the Refugee Processing Center in Virginia, where the cases are allocated among nine resettlement agencies — including MRS — that are funded by the State Department to settle those people into new homes in the United States. That’s the level at which individual parishes working with diocesan offices would become involved in accepting individual refugees.

Canny said the half dozen dioceses that have asked to start resettlement programs would be receiving people not just from Syria, but from the broader population of worldwide refugees as well.

Hogan explained that the resettlement programs will attempt to put as many Syrians as possible into communities that already have Syrians living there. He said the largest populations of Syrians in the U.S. are in central New Jersey, parts of Pennsylvania, Ohio, Michigan, California, Oregon and Texas.