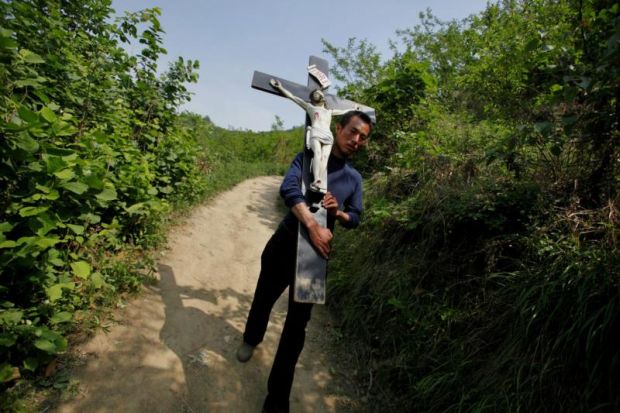 In this 2013 file photo, a Chinese Catholic carries a crucifix during a pilgrimage in the Shaanxi province of China. Hong Kong Cardinal John Tong Hon has asked Communist Party chiefs in Beijing to order a halt to an ongoing cross-removal campaign from churches in Zhejiang province. (CNS photo/Wu Hong, EPA)

KONSTANCIN-JEZIORNA, Poland (CNS) — Prominent Chinese Catholics have warned that a campaign to remove crosses from church buildings could signal wider restrictions on religious freedom, but cautioned Christians not to overreact.

“Whatever those in power do, their first question now is how they can best serve their own interests, rather than socialism or any common purpose,” Archbishop Savio Hon Tai-Fai, secretary of the Vatican’s Congregation for the Evangelization of Peoples, told the ninth European Catholic China Colloquium in mid-September.

“In this case too, there’s clearly something behind these nasty actions. You don’t provoke the anger of the people by burning and ripping down crosses unless you want to achieve something,” he said, referring to the removal of crosses from places of worship in Zhejiang province, widely believed China’s most Christian region.

In a Sept. 11 interview with Catholic News Service, Archbishop Hon said Zhejiang’s provincial Communist Party boss appeared to have been encouraged by central government figures to conclude he could further his career by attacking local Christians, at a time when Christianity’s rapid expansion was causing official unease.

Father Paul Han, an official of the church’s Jinde Charities organization, based in Shijiazhuang, said he also believed government moves were now underway to reduce the “visibility of Christianity” in China, and he cautioned against a militant response.

“Having previously been ready to encourage Christianity for its social and moral benefits, the government is becoming scared about its expansion,” he said.

“Whether this is now extended into a wider clampdown could depend on how Christians react. If they resort to violence, this will pour oil on the flames and be used to justify harsher restrictions. There are good people on both sides, but also extremists.”

In 2014, local officials began tearing down crosses in the coastal city of Wenzhou, citing building regulations. Since then, they have removed more than 1,200 crosses throughout Zhejiang.

The campaign was protested by China’s state-approved Catholic and Protestant associations, as well as by Cardinal John Tong Hon of Hong Kong, who appealed to Communist Party chiefs in Beijing Aug. 12 to stop the “illegal cross removals” and “return to the right path, placing supreme importance on the constitution.”

However, Catholic sources said several churches had also been bulldozed and numerous Christians, including Protestant pastors, arrested for opposing the moves, adding that up to 4,000 crosses were believed targeted for removal from spires and towers by the autumn.

He added that Bishop Paul Meng Qinglu, deputy chairman of the communist-controlled Chinese Catholic Patriotic Association, had been told in March that the government had ordered an end to the campaign, but said the cross removals had continued despite this.

“Christian are clearly being warned not to go too far — and being reminded the regime is still in charge and can do the same elsewhere,” Father Lepeu told CNS Sept. 12. “Local rulers are often very powerful and look for ways of expressing this power, and the central government allows them to test reactions and doesn’t intervene.”

Sister Teresa Yu, a member of China’s Congregation of Missionaries of the Sacred Heart of Jesus, described the Zhejiang campaign as a “hurricane,” adding that some lay Catholics had wept, prayed and chained themselves at targeted churches to show they were “ready to die for the cross.”

Archbishop Hon told CNS he agreed that Chinese Catholics should be “very careful” not to be provoked into violence while seeking to protect their churches and crosses, adding that the Vatican would urge them to “follow the Holy Spirit” rather than recommending any concrete action.

Father Han said he believed the best reaction was to pray, rather than “resort to violence to counter violence.”

“As Christians, we should always be ready to suffer persecution for our faith — this is where wisdom and courage really lie,” he told CNS.

“If the government feels the church and its members are doing work for society which complements that of the regime, it will tolerate them. If it can decree they’re colluding with imperialists against China, there will be no further negotiation. It’s essential the church doesn’t give them a pretext for this.”

NEXT: Amid refugee crisis, church agencies on the ground and offering homes