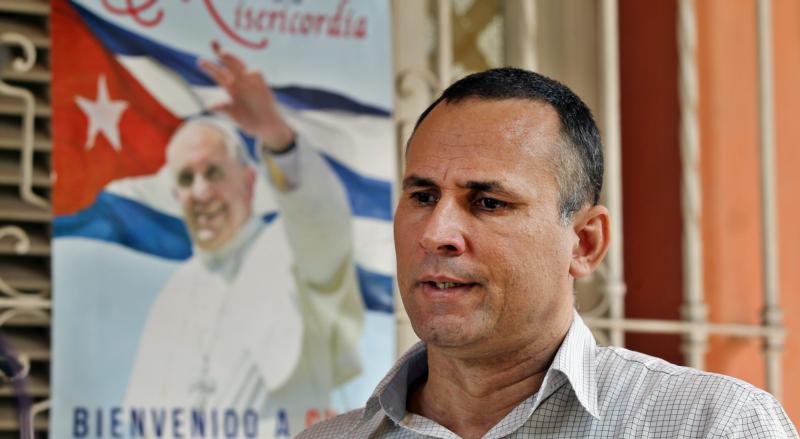 Former political prisoner Jose Daniel Ferrer, who leads the dissent movement Union Patriotica de Cuba, speaks during an interview in Havana Sept. 11. A week before Pope Francis arrived in Cuba, the Communist government agreed to pardon 3,522 prisoners, including elderly and people under 20 with no prior offenses. (CNS photo/Alejandro Ernesto, EPA)

SANTIAGO DE CUBA, Cuba (CNS) — A week before Pope Francis arrived here, the communist government agreed to pardon 3,522 prisoners, including elderly people and people under 20 with no prior offenses.

It was seen as a gesture of goodwill ahead of the papal visit, one meant to signal the Cuban government has grown more tolerant. But just two days later, on Sept. 13, Cuban authorities cracked down on political dissidents, arresting 140 members of two opposition groups and allegedly beating some of them before they attempted to attend Mass in Santiago de Cuba.

In the days that followed, more members of opposition groups were arrested, including more than 20 members of the Ladies in White, a group founded by women whose husbands and relatives had been jailed for their opposition to the government, and members of the Patriotic Union of Cuba, the country’s largest dissident group.

The release of prisoners and subsequent jailing of political opponents underscore the unpredictable environment for activists in Cuba. When the U.S. and Cuba reached a deal to renew diplomatic relations, one Pope Francis helped broker, the U.S. government and many in Cuba hoped it would help usher in a period of greater freedom for opposition groups.

Instead, activists in the country said arrests have continued and, in some cases, increased. Some groups have criticized church leaders in Cuba for being too close to the government. Now, they are asking Pope Francis to use his trip to raise the issue of human rights.

“The objective of this ‘social cleansing’ is to put (dissidents) out of the sight of religious pilgrims, foreign journalists and other visitors who will be in Cuba these days for the visit of His Holiness Pope Francis,” said Elizardo Sanchez, spokesman for the independent Cuban Commission for Human Rights and National Reconciliation, which is viewed as illegal by the government.

Jose Daniel Ferrer, leader of the Patriotic Union of Cuba, wrote an open letter to Pope Francis Sept. 3 asking him to “intercede and take up the defense of the rights of the oppressed in Cuba, who represent the majority.”

“The world has continued to open up to Cuba, but the Cuban government hesitates to open to the world, continuing to maintain a closed attitude,” Ferrer wrote in the letter.

Pope Francis is not scheduled to meet with any of the dissident groups during his visit, Jesuit Father Federico Lombardi, Vatican spokesman, told reporters before the trip.

The Cuban government, through its international press office, did not respond to questions about the arrests. However, the government has said that peaceful opposition is permitted as long as it is not funded by foreign entities.

Cuban news outlets have reported on an alleged plan, called “Project September,” in which dissident groups financed by Miami-based Cuban-American groups are trying to “sabotage” Pope Francis’ visit by occupying certain churches around the country.

“The intention is not only to damage the pope’s visit to Cuba, but also the current negotiating process underway between Cuba and the U.S.,” said an article written by Percy Francisco that was given to Catholic News Service by the Cuban Foreign Ministry.

Various dissident groups did not respond to questions about their plans for Pope Francis’ visit. A spokesman for Patriotic Union said he expected many of the group’s members to be detained when the pope arrives.

The government detained more than 7,180 people from January to August 2014, an increase from 2,900 in 2013 and 1,100 in 2010, according to the Cuban Commission for Human Rights and National Reconciliation. Human Rights Watch cited the figures in its 2015 report on Cuba.

“While in recent years it has relied less on long-term prison sentences to punish its critics, short-term arbitrary arrests of human rights defenders, independent journalists, and other critics have increased dramatically,” Human Rights Watch said in its report.

U.S. President Barack Obama has said that, by engaging with Cuba, the U.S. can do more to encourage political freedoms than it could without a diplomatic presence, an approach that has drawn support of church leaders in Cuba and the U.S.

Yet, how quickly the situation will change depends largely on the Cuban government, said Julissa Reynoso, former deputy assistant secretary of state for Central America, the Caribbean and Cuban.

“President Obama’s reforms help families, as now Cubans in the United States can freely travel to the Island, and facilitate the exchange of ideas and opportunities in Cuba,” said Reynoso, now an attorney at New York-based Chadbourne & Parke. “Of course, this is an ongoing process and any change in Cuba will be in the hands of Cubans.”

PREVIOUS: After decades of separation, Cuban-Americans return to homeland

NEXT: Holguin Catholics delighted their time has come for papal visit