After decades of separation, Cuban-Americans return to homeland 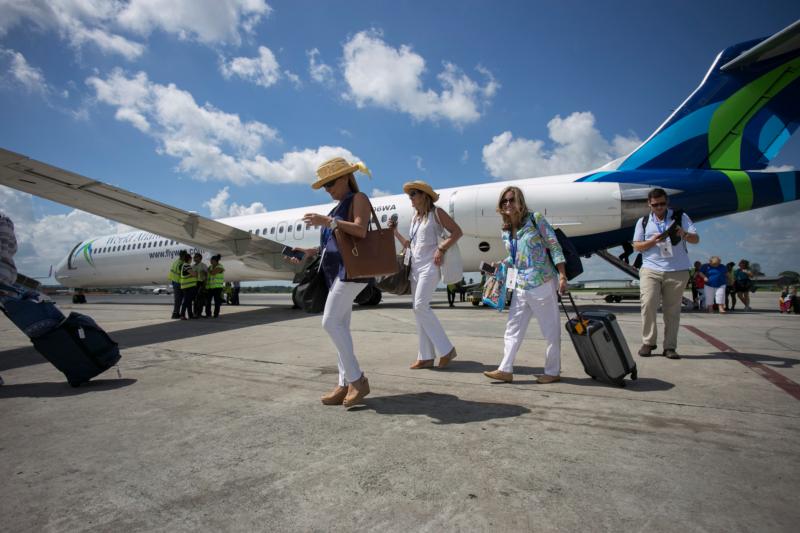 Florida pilgrims arrive Sept. 18 in Havana to see Pope Francis during his historic visit to the island. (CNS photo/Tom Tracy)

HAVANA (CNS) — With looks of astonishment and joy, dozens of Cuban-Americans stepped off a charter flight from Miami to Havana Sept. 18 in advance of Pope Francis’ visit.

For many, it was a first return to the island nation after decades of separation and distrust following the Cuban Revolution. The 2015 papal visit, along with easing of diplomatic relations between Cuba and the United States, meant the time was right to finally see Havana again.

“We left in 1969,” said Marta Mohr, a Cuban-American from Miami who traveled with some 180 other Florida Catholics for a four-day pilgrimage sponsored by the Archdiocese of Miami. Her battle with pancreatic cancer propelled her to choose to come to Cuba but also had threatened to leave her too weak to make the trip.

Mohr’s son, Leonardo “Felice” Gorordo, has traveled to Cuba many times and helped establish Roots of Hope, a Miami-based nonprofit to improve the lives of young Cubans and to foster better relations between young people in the U.S. and Cuba.

“Felice talked me into it, and every time he would come back from a trip, there was always a yearning from me and now, because of my situation, I just couldn’t wait any more,” she said. “I think this is going to be a very spiritual experience. I think being in the presence of the Holy Father will give me strength.”

Gorordo, a graduate of Georgetown University whose father was evacuated from Cuba during Operation Pedro Pan, said he had grown up in a household where Cuba was a nightly subject of conversation.

“I was a freshman at Georgetown and had an identity crisis, so took a class on Cuba, and the teacher told me that you can’t learn Cuba through a book and that you can only know about Cuba by going,” he said. “I took a pilgrimage of sorts about 15 years ago. It was a great experience, but I said to myself that I can’t let this be anything less than a transformative experience.”

He planned to accompany his ill mother around Havana for the papal visit and, afterward, to visit the family’s hometown.

Standing in line for immigration processing at Havana’s airport, another Miami resident, Gloria Arazoza, said it had been 55 years since her family left Cuba. She came with her children and extended family members. 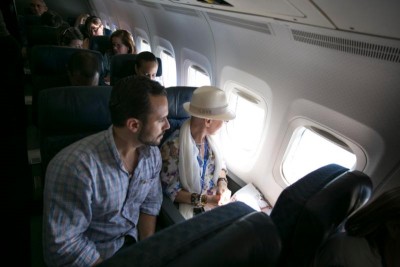 “It has been a great gift to be able to come; I never thought I would be able to return, but this pilgrimage came up with the pope here and my children said, ‘This is the time to go. You either go now or you don’t go,’ and I said. ‘Great, let’s go.'”

Arazoza said she hoped to have a look at her old house, her grandparents’ house, the parish church in Havana where she married and the old campus of St. Thomas Villanova University, where she went to school. She also wanted to see the old Havana Biltmore Country Club, where she and her now-deceased husband spent some of the early years of their marriage.

“My husband was pretty open and was not one of those who said he would never come back, but it wasn’t such a common thing to go,” she said.

Francis Serantes Gomez, a Miami resident who hadn’t been back to her homeland since 1961, said she came with her husband, Andy Gomez, a retired academic from the University of Miami, who has traveled to Cuba in recent years and who is helping support parish programs at one of the churches in Old Havana.

“I did want to come, but I had reservations and also respect for my parents and their beliefs, so this is a big deal,” she said. “I love this pope and I just feel a little safer maybe because of the connections and the reconciliation with the United States.”

Mary Soto, a 25-year-old resident of Columbia, South Carolina, grew up in Miami with her Cuban-American family and made the Havana pilgrimage with her mother, who left at the age of 2.

“I grew up thinking I would never be able to go, so as soon as the chance came up to go and see … everything my grandmother talks about, I want to see that,” Soto said. “I got most of my stories about Cuba from my grandmother. It will be emotional, exciting and very powerful.”

Miami Archbishop Thomas G. Wenski was leading the Sept. 18-21 pilgrimage from Miami to Havana in support of Pope Francis’ visit to the island. The pope was to then make a three-city visit to the U.S., culminating in the World Meeting of Families in Philadelphia.

The trip is the third Miami archdiocesan pilgrimage to Cuba for three papal visits there, beginning with St. John Paul II in 1998, then Pope Benedict XVI in 2012.