Earth and its poor cry out, and we must listen, pope says 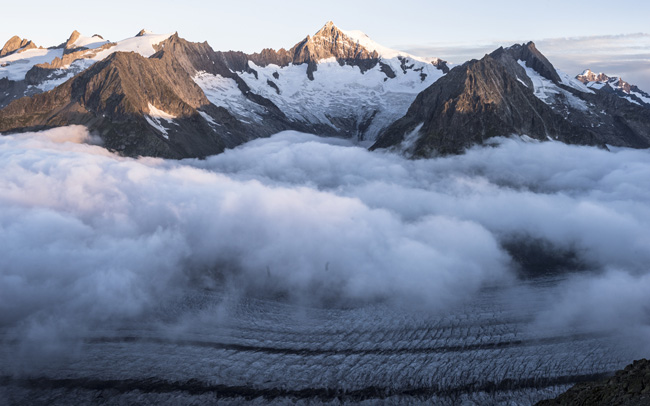 The Aletsch glacier is seen in late July in Fiesch, Switzerland. While there is not unanimous agreement about the causes of climate change, global warming and extreme weather, Pope Francis repeated his conviction that "a widespread consensus is emerging" that places much of the blame on irresponsible human action. (CNS photo/Dominic Steinmann, Reuters) 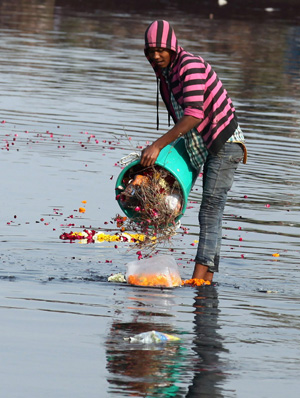 A resident dumps garbage into a river in New Delhi in 2014. (CNS photo/Money Sharma, EPA)

VATICAN CITY (CNS) — While there is not unanimous agreement about the causes of climate change, global warming and extreme weather, Pope Francis repeated his conviction that “a widespread consensus is emerging” that places much of the blame on irresponsible human action.

Addressing participants at a meeting sponsored by the Foundation for Sustainable Development, Pope Francis said the issue is a matter of justice, particularly because destruction of the environment hits the poorest communities first and hardest.

“Climate is a common good, which today is seriously threatened,” he said Sept. 11. “The question of climate is a question of justice and also of solidarity, which can never be separated from justice.”

Pope Francis told those working to mitigate the human impact on the environment and climate that they could count on the support of the church, particularly its prayers.

“I offer to the Lord our common efforts,” he said, “asking him to bless them so that humanity would finally start listening to the cry of the earth — our mother earth today is among the many excluded ones who cry out to heaven for help!”

Listening to the cries of the earth and of “the poorest of those who live there,” should lead to real, serious efforts to care for them both, he said. “In this way, creation will become more of the common home that the one Father had imagined it to be as a gift for the universal family of his creatures.”

Pope Francis said, “Science and technology have placed unprecedented power in our hands; it is our obligation to humanity as a whole, and particularly to the poor and to future generations, to use it for the common good.”

All people have a responsibility to ensure their personal actions respect the environment and they must do what they can “based on the role they have in their family, in the world of work, the economy and research, in civil society and in institutions,” he said.

No one can solve the problem alone, the pope said. Dialogue is necessary as is cooperation, and that means including the poor in discussions about projects and priorities. “The greatest enemy here is hypocrisy,” he said.

Real dialogue, he said, is urgent as representatives of the international community prepare to meet in Paris at the end of the year to discuss commitments to reducing dangerous emissions and mitigating climate change.

“Will our generation be remembered for having generously shouldered its grave responsibilities?” he asked. “Despite the many contradictions of our time, we have sufficient reason to nurture our hopes of being able to do so. And we should let ourselves be guided by this hope. In fulfilling this commitment, I hope that each one of you may experience the satisfaction of participating in actions that transmit life. The joy of the Gospel resides here as well.”