No one can pretend not to know Syrians, Iraqis are suffering, pope says 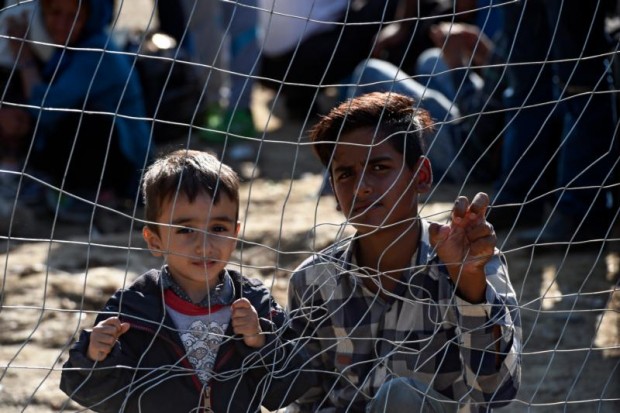 Migrant children look through a fence as they wait permission to cross the border between Greece and Macedonia Sept. 15. "Do not abandon victims" of conflicts in Syria and Iraq, Pope Francis said. (CNS photo/Georgi Licovski, EPA)

VATICAN CITY (CNS) — Millions of Iraqis and Syrians are facing poverty and even death, neighboring countries are bearing more than their fair share of the burden of helping refugees, arms dealers are getting richer and the international community seems helpless, Pope Francis said.

The “atrocities and unspeakable human rights violations, which characterize these conflicts, are transmitted live by the media,” the pope said Sept. 17. “No one can pretend not to know!”

Pope Francis spoke about the ongoing crises during a meeting with Catholic charity and humanitarian organizations working in Iraq, Syria, the neighboring countries and elsewhere to assist victims of the fighting and those who have fled.

The meeting was sponsored by the Pontifical Council Cor Unum, the Vatican office that coordinates Catholic charitable giving. The purpose of the meeting was to share information about the crisis and the status of Christians and other vulnerable communities, the humanitarian needs, projects already underway and priorities for the future.

Some 4 million Syrians have managed to find refuge in the Middle East, with 1.9 million being hosted in Turkey, 1.1 million in Lebanon and about 600,000 in Jordan, Cor Unum said.

Pope Francis described the consequences of the fighting in Syria and Iraq as “one of the most overwhelming human tragedies of recent decades.”

“The international community seems unable to find adequate solutions while the arms dealers continue to achieve their interests,” he said. “We need to find a solution, which is never the one of violence, because violence only creates new wounds and new wounds create more violence.”

The pope urged the Catholic aid agencies to continue their commitment to helping in “this ocean of pain,” and asked that they pay particular attention to the needs of families, the elderly and children. It would be good, he said, to make sure that children are able to get some kind of schooling, which is key to them having a decent future.

In both Syria and Iraq, he said, Christians and Muslims have lived together for centuries with mutual respect. Now, he said, “the very legitimacy of the presence of Christians and other religious minorities is denied in the name of a ‘violent fundamentalism claiming to be based on religion,'” which is the position of the Islamic State forces.

“The church responds to the many attacks and persecution that she suffers in those countries,” he said, “by bearing witness to Christ with courage, through her humble and fervent presence, sincere dialogue and the generous service in favor of whoever that are suffering or in need without any distinction.”

PREVIOUS: Pope says he is ‘a bit feminist,’ thanks women religious for hard work

NEXT: Migration, freedom, ecology to be topics on pope trip, cardinal says