Pope calls on Europe’s parishes to take in refugees 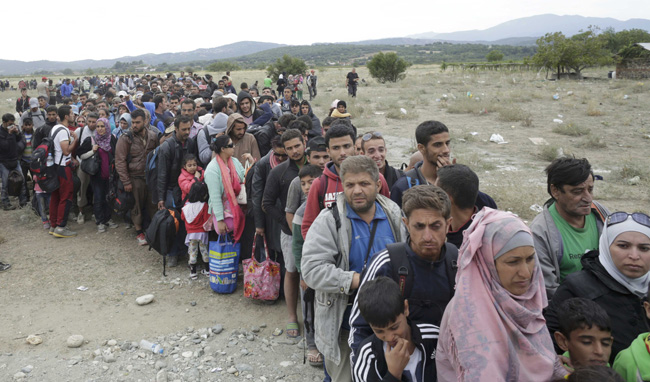 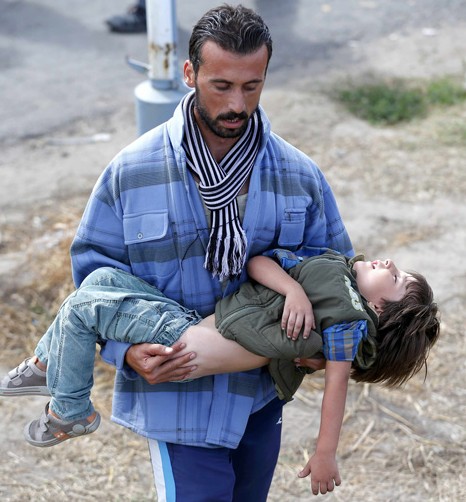 A migrant seeks medical attention for a child suffering with heatstroke in the village of Roszke, Hungary, Sept. 7. (CNS photo/Laszlo Balogh, Reuters)

VATICAN CITY (CNS) — Given the ongoing crisis of people fleeing from war and poverty, Pope Francis asked every parish and religious community in Europe to take in a family of refugees as a concrete sign of hope and God’s mercy.

“The Gospel calls us, asks us to be near the least and the abandoned. To give them concrete hope, not just say ‘Hang in there, have patience!'” he said in an appeal after praying the Angelus with those gathered in St. Peter’s Square Sept. 6.”Christian hope has a fighting spirit with the tenacity of someone who is heading toward a sure goal,” he said, while he encouraged all of his “brother bishops of Europe — true shepherds,” to support his appeal in their dioceses.

“In the face of the tragedy of tens of thousands of refugees, who are fleeing death because of war and hunger” and are seeking a new life, the pope called on “parishes, religious communities, monasteries and sanctuaries all across Europe to give concrete expression of the Gospel and receive a family of refugees.”

God’s mercy is expressed through the works of regular men and women, he said, reminding people that Christ taught that “whatever you did for one of these least brothers of mine, you did for me.”

He said the gesture would also be a concrete way to prepare for the Holy Year of Mercy, which begins Dec. 8.

The Vatican newspaper, L’Osservatore Romano, said St. Peter’s Basilica and the Vatican’s St. Anne Church would sponsored their first refugee families soon as well as seek employment for each head of the household.

The pope asked that two apartments near the Vatican be made available for the two families, said Cardinal Angelo Comastri, archpriest of St. Peter’s Basilica.

“The pope wants the apartments to be near where he is, also to guarantee health care” and other services available in Vatican City State and not put a burden on the Italian government, the cardinal said.

Before the Angelus prayer, the pope said Christians must not be closed up inside themselves, as is often the case. “We create so many inaccessible and inhospitable islands,” he said.

The most basic relationships sometimes can become incapable of openness and mutual exchange, such as families, associations, parishes, even nations, demonstrating yet another example of human sin, he said.

He reminded Christians they are called to open themselves up to God and his word, and to others, sharing the Word with those who “have never heard it or to those who have forgotten it — buried under the brambles of the worries and deceptions of the world.”

Meanwhile, people of all religious beliefs must never give up and give in to war, the pope said in a message to an international gathering for peace in Tirana, Albania.

“We must never resign ourselves to war, and we cannot remain indifferent before those who suffer because of war and violence,” he said in a written message to those gathered for the interreligious meeting sponsored by the Catholic lay movement, the Community of Sant’Egidio.

“Violence can also be building up walls and barriers to block people who are seeking a place of peace. It is violence to turn away people who flee inhumane conditions in their hopes of a better future,” the pope wrote.

Believing that peace is always possible is not a sign of naivete, he said, but an expression of one’s belief that “nothing is impossible” with God.