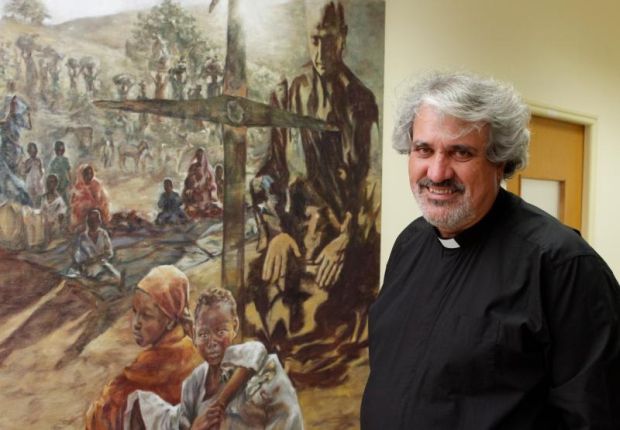 VATICAN CITY (CNS) — For eight years, Jesuit Father Peter Balleis has captured the beauty, the determination and the exhaustion in the faces of the migrants and refugees he has met around the world as international director of Jesuit Refugee Service.

He understands how with the photograph of 3-year-old Aylan Kurdi, the Syrian boy who drowned, “the crisis in the Middle East, the drama, has reached the hearts of the people.”

Seeing that “boy, who could be anyone’s grandchild or child, that child who should not have died,” people spontaneously knew “something is wrong here, something is wrong that people take such desperate steps, risking their lives in shaky boats.”

The deaths of 71 migrants or refugees in the back of a truck found abandoned in Austria in late August also made many people realize “something has to be done,” Father Balleis said.

“That changed the public debate,” the German Jesuit said.

In his photographs, he said, he tries to communicate the person he met, making sure they are not just a reflection of the statistics on refugees and migrants around the world.

A photograph “is not a number or a problem, but a human person,” he said. “It evokes a level of compassion, of feeling. And what follows is action.”

Like the famous photographs of Aylan, taken on the beach in Turkey, he said, a picture “can evoke compassion and a re-thinking.”

U.S. Jesuit Father Thomas H. Smolich, who will succeed Father Balleis as international director Oct. 8, said, “Photos also get to our memories, which is a different place than our intellects. So that boy on the beach touches on the 3-year-olds that we were and the 3-year-olds we know. He’s perfectly dressed and he should be fine. But he’s not.”

“The images get us out of our heads and into our hearts,” Father Smolich said. “And that’s what the pope is doing, he is inviting us to respond out of a place of faith and a place of love rather than a place of fear.”

Fathers Balleis and Smolich spoke with Catholic News Service Sept. 7 at the Jesuit headquarters near the Vatican just one day after Pope Francis called on every parish in Europe to take in one refugee family. The Vatican announced that both of its parishes — St. Peter’s Basilica and St. Anne’s Church — would do so.

JRS France already had been doing something similar with its “Welcome en France” program, a program that JRS has launched in other countries as well. Families volunteer, with assistance and support from JRS, to take in refugees and asylum seekers for one month. Before the deaths of Aylan and the 71 refugees in the truck, the program had five inquiries a week from people wanting to help, said Michel Croc of JRS France. “Last week, we received hundreds of calls,” he said Sept. 7.

The recent popular response in Europe to the plight of the refugees and Pope Francis’ appeal tipped the narrative in media and in public opinion to the positive side, Father Balleis said. It is no longer just “the crazies, the neo-Nazi, those who are hostile getting the headlines.”

The news also reflects the reality of what is happening, Father Smolich said. The number of people fleeing Syria “has been increasing for months” and as it is more and more difficult for the refugees to find accommodation in Jordan, Lebanon and Turkey, “the push factors are overwhelming” and many see Europe as their only hope.

They will continue risking their lives, Father Balleis said, until the European Union and individual European countries make it possible for people to apply for asylum before entrusting their lives and the lives of their children to smugglers selling passage on unsafe boats to reach a European country.

PREVIOUS: Pope calls on Europe’s parishes to take in refugees