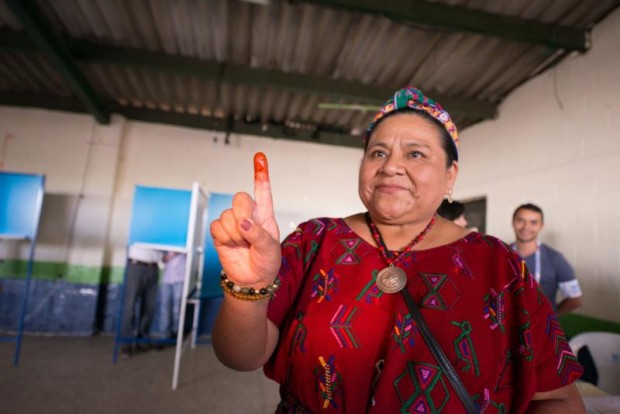 Nobel Peace Prize winner Rigoberta Menchu shows her ink-stained finger after casting her vote at a polling station in the general elections in Guatemala City Sept. 6. Guatemalans have protested and prayed and achieved unprecedented political change in their country. (CNS photo/Esteban Biba, EPA)

GUATEMALA CITY (CNS) — Mass at the Divine Providence Parish, celebrated shortly after polls closed in this country’s recent elections, included intentions. The parishioners prayed for the “people and pastors” of Guatemala, along with the country itself — where citizens, protesting peacefully for months, forced a president accused of corruption to resign in the days prior to the Sept. 6 vote.

“Please rid us of this corruption and the leaders who have taken us down the wrong paths,” prayed Father Hugo Estrada, Mass celebrant. “We ask that you be with this great nation of Guatemala.”

Guatemalans have protested and prayed and achieved unprecedented political change in their country.

In the election, a plurality of them then voted for comedian-turned-candidate Jimmy Morales, 46, an Evangelical Christian with no political experience, hoping his lack of a past in a politics would prove a plus in a country with an unhappy history of politicians enriching themselves at the expense of a mostly poor population.

The vote proceeded peacefully, as church officials had hoped.

“For me, Jimmy is a blank check,” said Alejandro Quinteros Cabrera, an analyst for the election with Emisoras Unidas radio. “He presents himself as someone who will renew the system, but his proposals are pretty superficial.”

Morales won 24 percent of the vote in a field of 14 candidates and will likely face former first lady Sandra Torres in an Oct. 25 runoff election. Torres divorced then-President Alvaro Colom in 2011 to avoid restrictions on running for president that year.

Elections followed the resignation of President Otto Perez Molina, whom Congress stripped of immunity from prosecution. He faces corruption charges in a customs office fraud case known as La Linea (The Line) in which government officials, including his former vice president, allegedly accepted bribes from business owners wanting to pay lower import duties.

Quinteros, who participated in anti-government protests, credits timing with pushing out the president; he said many lawmakers previously on the president’s side “were afraid of not being re-elected.”

Many priests and religious participated in the protests, too, although Quinteros called the church hierarchy response timid, with only an indirect call for Perez Molina to resign.

Other Guatemalans prayed for change.

“We joined (with Evangelicals) in a single cry to pray for Guatemala,” said taxi driver Samuel Marroquin, who worships in a charismatic renewal congregation.

“We know that there’s always been corruption,” Marroquin said. “But in this government, it was excessive, so we had to put an end to it.”

“(Politicians) arrive in a public office and see themselves as having only four years there, so they have to act fast and take advantage of it,” he said. “They get rich because there is no oversight and there’s a bad example set by those at the top.”

Protests started in the spring after revelations of the La Linea scandal broke. In another scandal, a contract for providing kidney care in the state health service involved bribes to senior officials, including people close to the president. At least 13 patients died, according to press reports.

Corruption scandals used to go uninvestigated or unpunished. That has started to change with the establishment of the International Commission Against Impunity in Guatemala during the last decade.

“If it was a group of Guatemalans that started this (investigative) work, they would have been eliminated,” Father Estrada said. “This has been providential. Without it, none of this would have happened.”

Protesters in other Central American countries have called for the creation of similar commissions, operated by the international community and local governments.

“(The commission) allowed upstanding Guatemalan officials to do their jobs without fear of losing their jobs or their lives (and) insulates to a certain extent the prosecutor’s office from charges of playing political favorites,” says Mike Allison, an expert on Central American politics at the Jesuit-run University of Scranton, Pennsylvania.

The commission’s work helped spur the protests, too.

“We knew there was an investigation going on and that they had proof,” says Karin Pira, a banker in Guatemala City. “This will be a precedent for other Latin American countries.”

Some citizens expect the anti-corruption clamor to continue, regardless of who wins the election.

“The government will think twice,” Marroquin said. “They’re scared of the people.”

NEXT: Israel’s Christian students demonstrate against cuts in school budgets